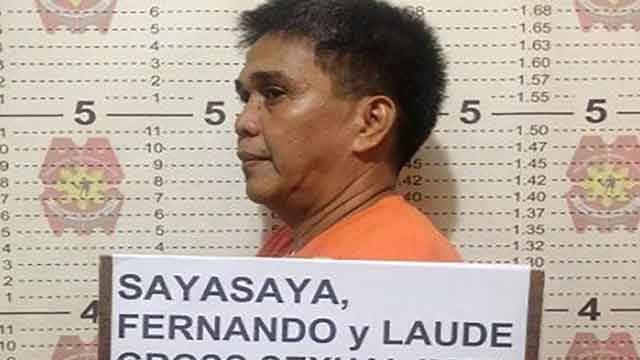 Facebook Twitter Copy URL
Copied
Police say Fernando Sayasaya, a former priest, was accused of molesting two boys in the state of North Dakota where he worked for the Catholic Church

MANILA, Philippines – A Filipino ex-priest is facing extradition to the US for allegedly sexually abusing minors there in the 1990s, authorities said Wednesday, November 22.

Fernando Sayasaya, 53, was tracked down by police in a province outside Manila on Sunday nearly two decades after he fled the US and went into hiding in the Philippines.

He was accused of molesting two boys in the state of North Dakota where he worked for the Catholic Church, police said.

He was put on administrative leave in 1998 following the allegations, but a US court only issued an arrest warrant for Sayasaya in 2002.

“He was charged of gross sexual imposition, that he (allegedly) made sexual contact on two young brothers who were aged under 15 at that time,” Chief State Counsel Ricardo Paras told AFP.

Before fleeing the US, Sayasaya apparently told his superiors he wanted to spend Christmas in the Philippines but never returned, Paras added.

He said the suspect, since defrocked, would be sent to the US for trial in compliance with a 2006 US extradition request that was approved by a Filipino court in 2012.

An official of the Catholic Bishops’ Conference of the Philippines said he was not aware of Sayasaya’s case.

“Even if he is a Filipino but he is not (assigned) in the Philippines, we don’t have any jurisdiction over him,” Father Jerome Secillano, the conference’s executive secretary for public affairs, told AFP.

The church in the mainly Catholic Philippines has also seen sexual abuse charges levelled against its clergy.

A priest was arrested in a Manila suburb in July after he was allegedly caught with a 13-year-old girl supplied by a pimp. – Rappler.com