PH, Japan to boost cooperation on security, maintaining rule of law in region 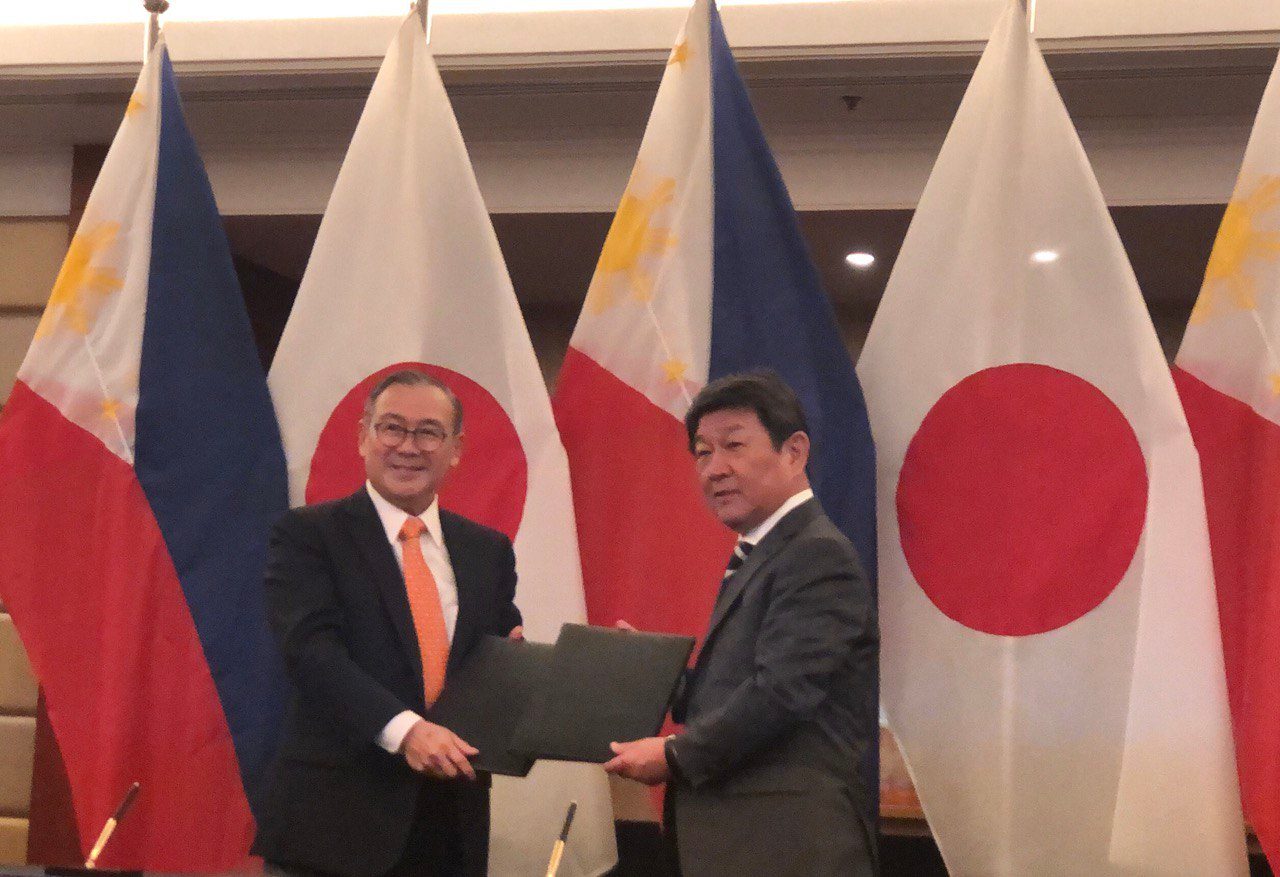 Facebook Twitter Copy URL
Copied
The two countries, both with territorial disputes with China, 'agreed to deepen bilateral cooperation in wide areas including security and enforcement of the laws of the seas,' says Japan Foreign Minister Motegi Toshimitsu

MANILA, Philippines – The Philippines and Japan on Thursday, January 9, underscored the importance of cooperation in maintaining the rule of law in the region as both countries continued to face China’s aggressive territorial claims.

During Japanese Foreign Minister Toshimitsu Motegi’s first official visit to the Philippines, Philippine Foreign Secretary Tedoro Locsin Jr said he and Motegi had “candid exchanges” on issues including the West Philippine Sea, with both sides agreeing to step up cooperation in upholding the rule of law of the sea.

“A survey of the most pressing concerns in the regional security environment is an indispensable element of our strategic dialogue. I was pleased with my candid exchanges with Minister Motegi on issues, such as the issue of the rule of law in maritime commons and the situation in the West Philippine Sea,” Locsin said.

“We committed to continue our cooperation bilaterally and in all possible forums to maintain peace and security, stability, and the rule of law in our region,” he added.

Motegi, for his part, emphasized the value of the Philippine cooperation, saying the country “holds the key to realizing the free and open Indo-Pacfiic concept advocated by Japan.”

“The Philippines is located at a great crossroad of which connects the Pacific Ocean and the Indian ocean, as well as the North hemisphere and the Southern hemisphere…. Secretary Locsin and I were able to deepen our discussion from such perspectives and agreed to deepen bilateral cooperation in wide areas including security and enforcement of the laws of the seas,” Motegi said.

The affirmation comes as President Rodrigo Duterte continued to nurture friendy ties with China, downplaying long-running maritime dispute in exchange for loans and grants from Beijing.

Both the Philippines and Japan are engaged in territorial disputes with China. For one, Manila and Beijing have been embroiled in a decades-long dispute in the South China Sea, with China claiming rights over areas in the West Philippine Sea, even after the Philippines’ victory at the Permanent Court of Arbitration in 2016 invalidated China’s expansive 9-dash line.

In the East China Sea, Japan and China claim rights over a set of islands which Japan calls the Senkaku and China calls the Diaoyu.

Locsin hailed Philippines-Japan relations as he reiterated Duterte’s previous remarks describing ties between the two countries as having entered a “golden age.” Motegi’s visit, he said, “adds further luster” to the countries’ “golden friendship which remains one of the region’s closest and strongest.”

“The Philippines Japan strategic partnership has been a positive force, not just for Philippine development and security but in the best interest of our larger region,” he said.

The DFA chief also praised Japan’s investments and assistance to the country, particularly in defense, the Duterte adminstration’s infrastructure program, and in Mindanao and the Bangsamoro Region in Muslim Mindanao.

“Japan is what we call a consistent podium finisher. It is the Philippines’ second largest trade partner, 3rd largest investor, top provider of ODA (official development assistance), and ranks a close 4th in terms of inbound tourism,” Locsin said.

He added, “I welcome Minister Motegi’s pledge of continued substantial, financial, and technical support under the most concessional terms as only Japan can offer.” – Rappler.com