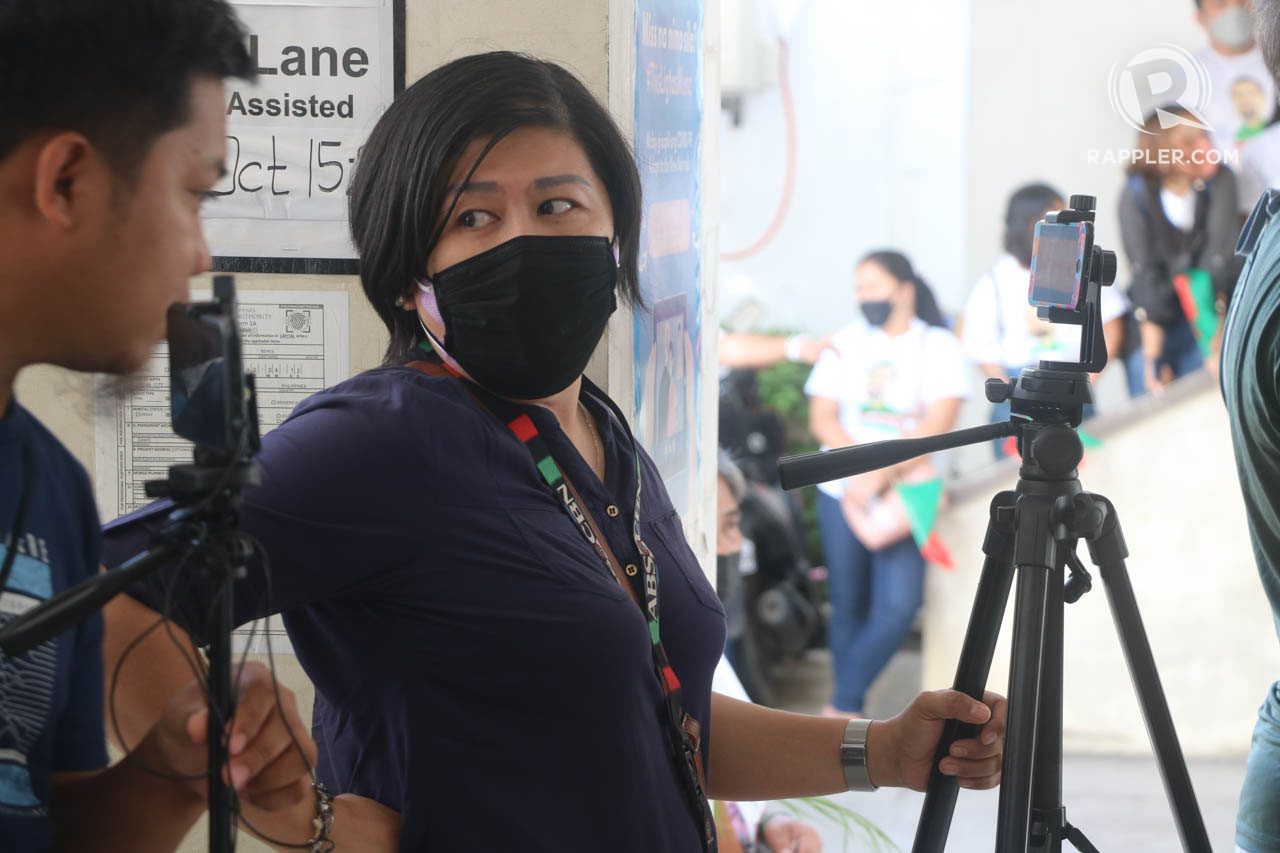 PROFESSIONAL. Dynah Diestro talks with Mark Bacroya of Radio Mindanao Network's DxDR in Dipolog City after the incident at the governor's office on February 17, 2022. Photo by Gualberto Laput/Rappler

Facebook Twitter Copy URL
Copied
(1st UPDATE) ‘Governor Uy, you have to remember that your office is not your office, that’s the office of the people of Zamboanga del Norte,’ journalist Dynah Diestro says after the incident which was condemned by some local journalists

ZAMBOANGA DEL NORTE, Philippines – Local media practitioners condemned Zamboanga del Norte Governor Roberto Uy for driving away from the Office of the Governor an ABS-CBN stringer who was covering the visit of four senatorial candidates on Thursday, February 17.

Dynah Diestro, who was ABS-CBN regional reporter before the network closed down, said she was positioning her camera inside the governor’s office when she noticed Uy pointing his finger are her.

At the time, Senator Sherwin Gatchalian was already seated, while senators Joel Villanueva and Juan Miguel Zubiri and former senator JV Ejercito were on their way to the Office of the Governor.

“At first I thought it was just some friendly gesture since I have been covering him in the past years, so waved at the governor, but then he gestured for me to get out,” Diestro said.

She said she just stood there for a while until Dapitan City Vice Mayor Jimboy Chan went near her and whispered, “Governor Uy wants you to get out of the office.”

“I was shooed [away] like a dog, and as I was on my way out, I overheard the governor saying, ‘She’s writing negative stories about me and the province, ’” Diestro said.

Diestro is known in Zamboanga del Norte as a straightforward and professional broadcast journalist.

“Governor Uy, you have to remember that your office is not your office, that’s the office of the people of Zamboanga del Norte,” Diestro said in a statement.

Meanwhile, some local journalists condemned what they said was the governor’s arrogance and ignorance.

Mark Bacroya, a broadcast journalist with Radio Mindanao Network’s DXDR radio station said that Uy’s behavior did not only curtail the freedom of the press, but “it also insulted the entire media community and the people of the province.”

Bacroya continued: “Government officials must be open to the press because it is normal that you do not necessarily like all the news [we report]. They should not be onion-skinned because there are times that the media write, broadcast, or post stories they don’t like.”

He added that officials must know before joining public service that they would be subjected to scrutiny by the media.

“By what he did, the governor just showed that he has no manners,” Bacroya said.

In a statement dated February 17, the governor denied that he shooed Diestro away from his office. He also claimed that the ABS-CBN stringer went out of the office “on her own volition” after being asked about her presence when there was no press conference scheduled.

Uy said that “when Senator Gatchalian first arrived inside my office and with the protocol that the only personnel who will be allowed inside the office are the four senatorial candidates and their respective private assistants, I therefore was surprised by the presence of Ms. Dynah Diestro who had no prior appointment or coordination whatsoever at that time.”

“I then proceeded to question Ms. Diestro’s presence but unfortunately, I obtained no categorical explanation from her end as she immediately walked out from my office,” Uy said.

Uy also said “there is no truth to Ms. Diestro’s claim that I wanted her out of my office as allegedly whispered by (Dapitan) Vice Mayor Jimboy Chan” – even though Diestro was quoting Chan, and the Vice Mayor did not dispute this.

The governor claimed to be an advocate of press freedom, and that he met “fair and square” constructive and negative criticisms hurled against him being a politician for most of her life.

Bacroya, however, pointed out that Diestro had no reason nor motive to fabricate such a claim and unnecessarily pit herself against the highest public official in Zamboanga del Norte.

For years, Diestro had been going in and out of the governor’s office without a problem, until last February 17 when she said she was driven out.

It was not also the first time that for the governor to keep a journalist he did not like out of his office. On November 3, 2020, the governor prevented Ronnie Jarapan – an officer of the Zamboanga del Norte Police Provincial Office Press Corps – from entering his office. Jarapan, a staunch critic of the governor, who was supposed to join his fellow officers in a courtesy call on the governor. – Rappler.com