Alumni group slams reappointment of generals in UP red-tagging fiasco

SABLAY. In celebration of the graduation season, the UP oblation statue in Diliman wears a sablay.

On Thursday, March 25, the UP Alumni Freedom Project said that with the reappointment of Major General Benedict Arevalo and Major General Alex Luna, the Department of National Defense and AFP provided a vague response regarding the red-baiting issue.

“No basis has been shown justifying the mercy of second chances… Neither the DND or AFP has offered the public a credible account or explanation of the circumstances surrounding the posting of the error-riddled list,” the group said.

“The defense secretary’s action downplays the actual and continuing injury that the post has caused us and other innocent parties, amid the AFP’s irresponsible red tagging activities,” the group added.

Lorenzana orders reappointment of generals in UP red-tagging fiasco 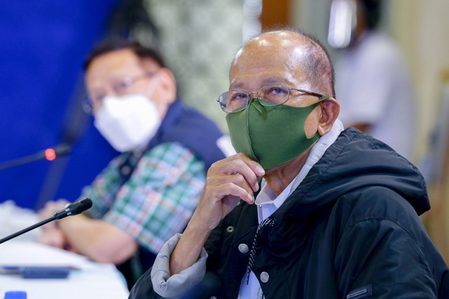 Major General Arevalo, whose J7 office ran the Facebook page that shared the erroneous list tagging 27 University of the Philippines (UP) alumni as communist rebels who have either died or been captured, took a leave of absence following the fiasco in January.

Before Arevalo’s leave, Lorenzana fired Luna – the military intelligence staff chief – over what the defense chief then described as an “unpardonable gaffe.”

The group also called on the military to not be obliged by Lorenzana’s orders.

“In the event that such a request had already been made, we call on the Chief of Staff of the Armed Forces not to oblige,” the group said.

The UP Alumni Freedom Project also announced that they are already in contact with legal experts for possible legal actions against officers involved in the red-tagging issue.

Both Arevalo and Luna became the highest ranking military officers to vacate their posts over red-tagging.

The red-tagging list stirred furor among UP alumni because the erroneous list red-tagged UP graduates who are currently lawyers, academics, artists, journalists, and civil servants. They include Alex Padilla, former president and CEO of PhilHealth, and Elmer Mercado, former undersecretary of the environment.

The list came after DND unilaterally terminated the 1989 UP-DND Accord that prohibits the police and military from entering UP campuses without prior notice. The treaty was signed to protect students and faculty members from possible abuses best exemplified during the time of dictator Ferdinand Marcos. – Rappler.com