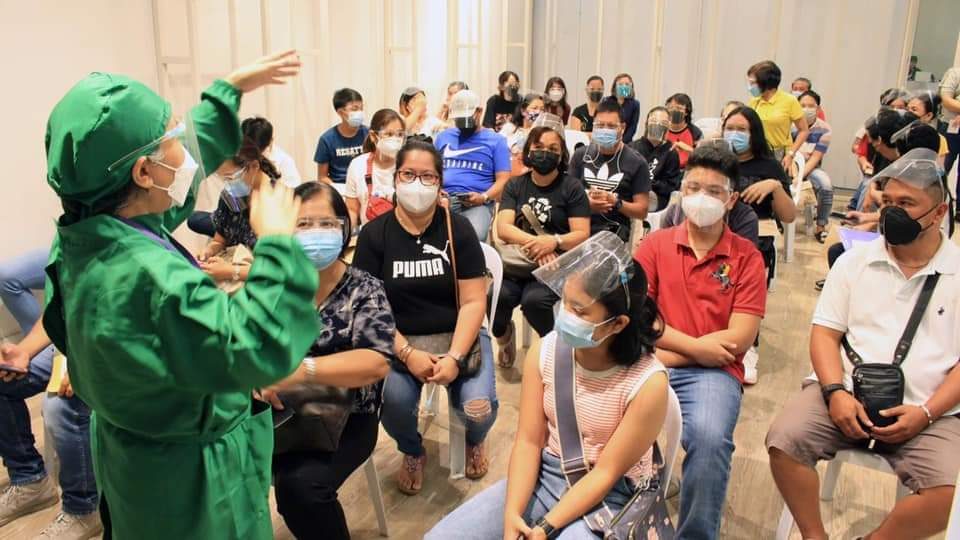 RUSH. Unvaxxed rush to get jabs as Cagayan de Oro implements 'no vax, no entry' rule.

Facebook Twitter Copy URL
Copied
Cagayan de Oro’s relatively high vaccination rate of over 81% enables local hospitals to discharge many COVID-19 patients faster given their milder symptoms, unlike in 2021 when a surge in cases nearly caused the collapse of the city’s hospital system

CAGAYAN DE ORO CITY, Philippines – Fewer people infected with COVID-19 are getting confined or spending time in Cagayan de Oro’s hospitals despite a spike in the number of infections in the city, and local health officials attributed this to the city’s relatively high vaccination rate.

The Department of Health (DOH) in Northern Mindanao said 467,181 people in Cagayan de Oro have been inoculated as of January 11, representing 81.3% of the 574,491 residents eligible for vaccination in the city.

Yu said the mass vaccination enabled hospitals in the city to discharge many COVID-19 patients faster given that many of the vaccinated who get confined experience milder symptoms, unlike in 2021 – particularly from July to August, when the city’s hospital system was overstretched and nearly collapsed due to a surge in the number of infections.

City hall counted 124 new COVID-19 infections over the weekend. Of the newly infected, only 32 people, or 25.8% were admitted to the state-run Northern Mindanao Medical Center (NMMC), the region’s primary referral hospital for COVID-19 cases.

Yu said the majority of cases were either asymptomatic or have mild symptoms, and those taken for observation and treatment were brought to quarantine facilities and a new hospital built by city hall in Barangay San Simon.

“This is the difference between now and that of last year’s upsurge. The vaccines are protecting the residents,” said Mayor Oscar Moreno.

But Moreno also cautioned those inoculated against complacency, saying the vaccines don’t promise a cure but merely increase people’s fighting chances against the virus.

The city government has continued to ramp up the local COVID-19 vaccination rollout in the hope that more would opt to get inoculated and receive their booster shots.

Cagayan de Oro logged its first COVID-19-related death this year on Saturday, January 15. The patient was a 45-year-old man who had been vaccinated but had comorbidities.

Among the new COVID-19 cases in the city is a nurse who infected 15 of her fellow workers in a private hospital.

Moreno said the city government has been preparing its medical teams and facilities in case the number of COVID-19 cases continues to increase in the coming weeks.

He said an entire floor at the city hall-run JR Borja Memorial General Hospital with a 60-bed capacity would be opened, and the Department of Public Works and Highways (DPWH) would set up a 100-bed modular facility at the new hospital in Barangay San Simon this week. –Rappler.com