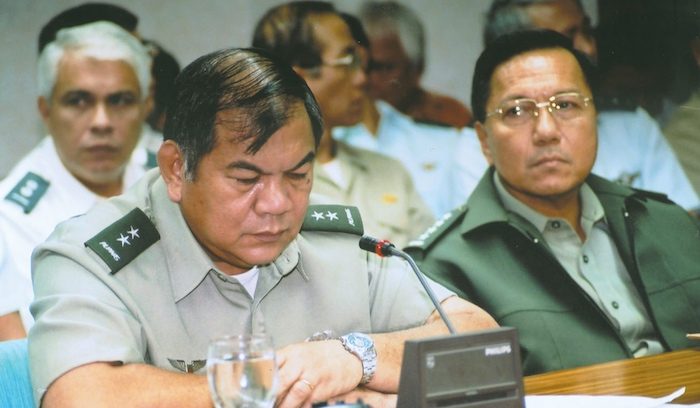 THREAD:Sandiganbayan renders judgment on retired Maj.Gen Carlos Garcia after a decade, convicting him of lesser charges of direct bribery and facilitating money laundering over AFP pabaon scandal, effect of the controversial plea bargain deal. What does this mean? @rapplerdotcom pic.twitter.com/zjfYz4b7RS

What is it about?

This case is about the scandal during the Arroyo government, prosecuted by the succeeding Aquino government, of retired generals receiving hefty parting bonuses or “pabaon” in a larger apparatus of corruption in the military. Garcia, whose sons were arrested in the United States in 2003 for smuggling dollars, has been in jail since 2011 initially for violations of the articles of war.

What was the judgment?

The Sandiganbayan Second Division promulgated the judgment on Tuesday, July 5. It was a short decision – running only eight pages – because Garcia has already pleaded guilty to direct bribery and facilitating money laundering.

The court sentenced Garcia to four to eight years for direct bribery and four to six years for facilitating money laundering. The sentences can be served simultaneously.

What is the effect?

Garcia, however, has been in jail for over ten years, so while not explicit in the judgment, it is likely that he would be considered to have already served his sentence. It means he is one step closer to freedom.

The court ordered Garcia to pay P406.3 million in fines – or thrice the value of the gift he received as “pabaon” – and another P1.5 million as fine for facilitating money laundering. The court said in case he cannot pay these, he can serve prison time instead, or what is called subsidiary imprisonment in case of insolvency.

This is the end of a case that went through the judicial mill for a decade, putting in question the credibility of the Ombudsman and the Sandiganbayan, with two presidencies at the center of it all. It was a case where the different justice agencies went against each other.

In February 2010, before former president Gloria Macapagal Arroyo stepped down, her ombudsman Merceditas Gutierrez struck a plea bargain deal with Garcia to drop the non-bailable charge of plunder in exchange for a guilty plea for the lesser offenses of direct bribery and facilitating money laundering. It was approved by the Sandiganbayan, but the Aquino-time Office of the Ombudsman and Office of the Solicitor General (OSG) tried to revoke the deal, leading the Supreme Court to stop the effectivity of the deal with a temporary restraining order (TRO) in 2013.

Garcia stayed at the New Bilibid Prison the entire time, at first to serve sentence for the articles of war offense, then to serve prison time for the plunder charge, which was preserved by the Supreme Court TRO. Garcia could have been jailed at a regular jail for plunder after he served sentence for articles of war, but he chose to remain in Bilibid, supposedly for his reformation advocacies there.

How was the Supreme Court involved?

In 2020, or after seven years, the Supreme Court upheld the deal ruling that the Aquino-time OSG could not revoke a deal that was already approved by Arroyo’s ombudsman Gutierrez. It put in motion the judgments for the lesser offenses, which were finally promulgated on Tuesday, July 5, by the Sandiganbayan. – Rappler.com