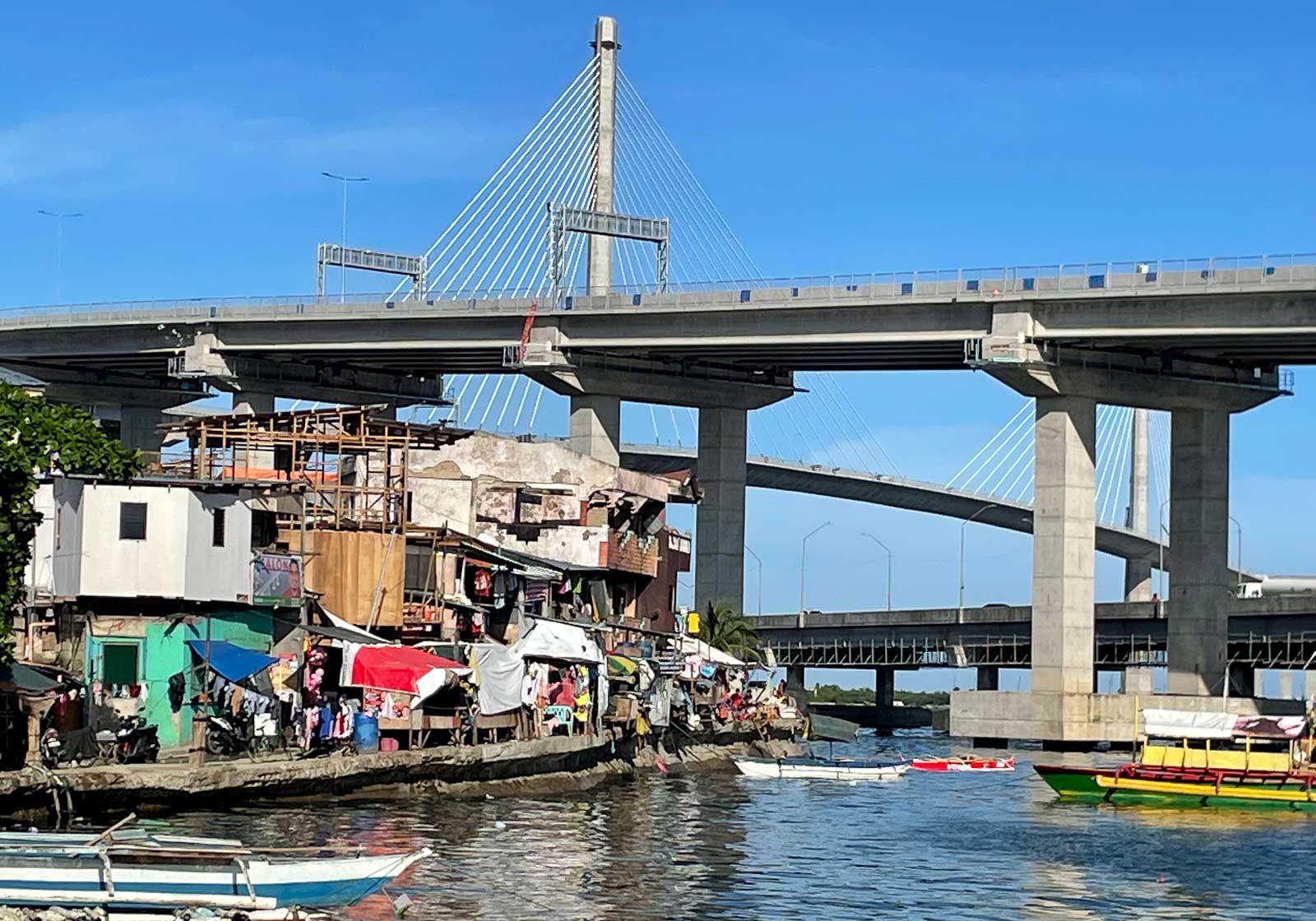 CEBU CITY. The 8.9-km Cebu-Cordova Link Expressway (CCLEX) as of April 23, 2022. Now the longest and tallest bridge in the Philippines, the CCLEX will have its opening ceremony led by President Rodrigo Duterte on Wednesday, April 27.

Facebook Twitter Copy URL
Copied
Cebu City Mayor Mike Rama promises that if he wins the 2022 election, he will prioritize the improvement of the urban poor areas of Barangay Pasil and its fish market

After a photo from Rappler of the CCLEX went viral for also showing dilapidated shanties from Barangay Pasil, Cebu City Mayor Mike Rama told Rappler in a phone interview on Thursday, April 28, that the area was supposed to be developed as well.

“That was supposed to be part of CCLEX. There was a movement for livable [neighborhoods] for all stakeholders,” he said.

“The original alignment of CCLEX included Pasil and the Guadalupe revitalization project. That was part of the plan,” Rama said.

The barangay is also near the South Road Properties, the city’s latest business district development.

He added that it would not have been only Pasil that would be developed but also coastal areas nearby as it was going to be integrated into his master plan for a “globally-competitive smart city”.

The issue was raised after a Rappler photo went viral for showing an urban poor neighborhood underneath the newly-built and now longest bridge in the Philippines.

The CCLEX is a P22-billion project spearheaded by Manny Pangilinan’s Metro Pacific Tollways Corporation (MPTC), the city of Cebu, and the Municipality of Cordova, among others. Rama told Rappler that Pasil would have been “transformed” if not for the changes in the initial plans for CCLEX during the previous administration, referring to former Cebu City Mayor Tomas Osmeña.

Osmeña told Rappler on Thursday afternoon, April 28, that it was Rama who changed the plans.

“It was Mike Rama that changed the plans so Pasil would be demolished so the bridge would connect to V. Rama. I said it was clear to me that Rama’s real intent was to name the bridge V. Rama bridge,” he said.

“I’m not going to demolish Pasil to glorify the Rama name,” Osmeña added.

Rama said his development plan did not mean he would demolish the neighborhood, but “integrate” the community into the development.

“There is no demolition. There is integration. The problem with Tommy is that he makes conclusions. How could there be a demolition when the DPWH would not allow it,” he said.

Rama is running against Tommy’s wife Margot for Cebu City mayor in 2022. (READ: Political dynasties 2022: No heirs for Osmeña, Rama in Cebu City)

Rama promised that if he would win the 2022 election, he would prioritize the improvement of the urban poor areas of the barangay and its fish market.

Rama had served a term as vice mayor since 2019 until the death of Mayor Edgar Labella in November 2021.

As for complaints about the photo, which critics say focused on the “negative” aspect of development, the NUJP-Cebu Chapter reminded citizens that photojournalism is meant to raise issues neglected in various localities.

“The National Union of Journalists of the Philippines—Cebu Chapter reiterates that the essence of journalism is truth-telling. It is not the job of journalists to turn a blind eye to the struggle of the sectors in the margins in order to please their readers. Nor are photojournalists obligated to omit visuals that could make the reader uncomfortable,” they said.

President Rodrigo Duterte came to Cebu to inaugurate the bridge on Wednesday, April 27, although it is not yet fully open to the public.