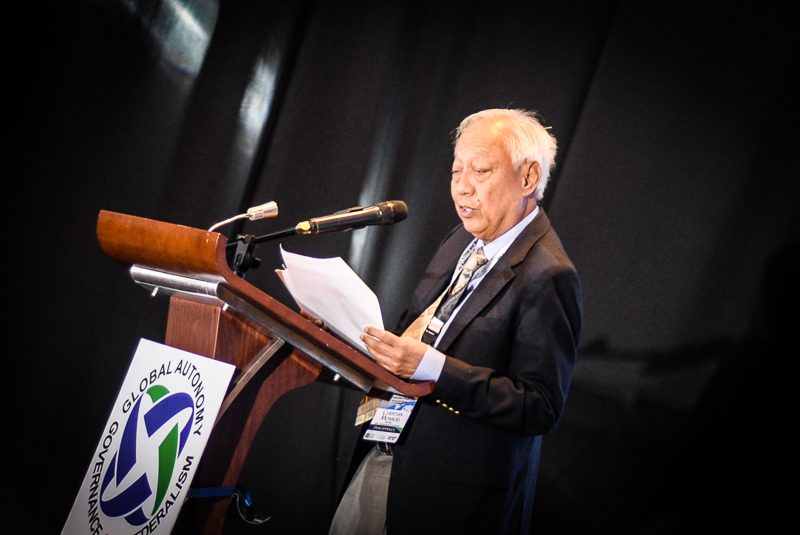 NO TO CHA-CHA. 1987 Constitution framer Christian Monsod speaks during a federalism forum at Dusit Thani Hotel on October 20, 2016.

Facebook Twitter Copy URL
Copied
'Given our experience with corrupt legislators and greedy business on transactional legislation, are we willing to entrust our legislators with that kind of power?' asks Christian Monsod, one of the framers of the 1987 Constitution

Christian Monsod, one of the framers of the 1987 Constitution, warned that Philippine lawmakers could sell out the country to foreigners should they succeed in amending the economic provisions of the charter.

Monsod did not mince words in his opposition to the renewed push to pursue charter change (Cha-Cha) to supposedly fight the effects of the coronavirus pandemic as he spoke before the Senate committee on constitutional amendments on Wednesday, January 27. 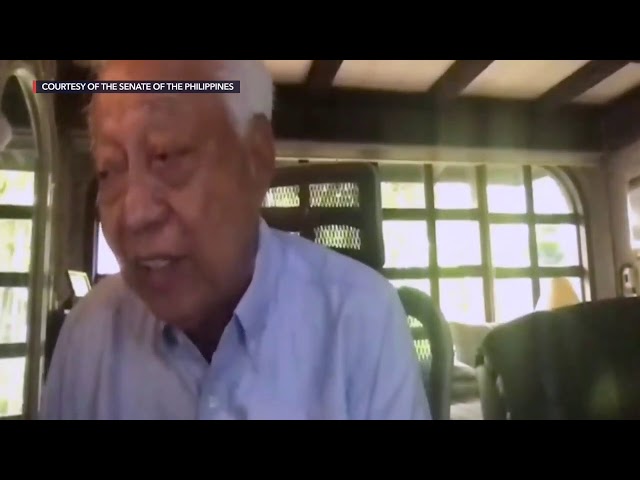 “The only issue on the table, they say, is a harmless insertion of one phrase. Given our experience with corrupt legislators and greedy business on transactional legislation, are we willing to entrust our legislators with that kind of power, especially since there’s so much more money from rich foreign investors?” asked Monsod.

Resolutions filed both in the Senate and the House of Representatives are proposing to add the phrase “unless otherwise provided by law” to the economic provisions of the Constitution.

This would ultimately empower lawmakers to use legislation to lift the constitutional prohibitions on foreign investors – something Congress is not allowed to do at the moment.

Monsod in particular took issue with Resolution of Both Houses (RBH) No. 2 penned by Senators Ronald “Bato” Dela Rosa and Francis Tolentino – both allies of President Rodrigo Duterte and who are proposing to make changes on the democratic representation and economic provisions of the Constitution.

“Above all, RBH 2 is a new and bigger source of illicit money than the pork barrel,” he said.

Monsod added: “Look at it this way: Once the insidious insertion is accomplished, our legislators will go to rich, foreign land developers of mining companies and ask, ‘By how much do you wish to increase your ownership of land? From 40% to 51%? P50 billion. Sixty-seven percent? P100 billion. Seventy-five percent? P155 billion. One hundred percent? P200 billion.’ That’s loose change.”

Monsod, however, misspoke about RBH 2 because it did not provide for specific amendments under their resolution.  The addition of the controversial phrase is stipulated in two other Cha-Cha resolutions in the Senate. These are RBH 1 by Senator Win Gatchalian and Senate Joint Resolution (SJR) No. 1 by Senator Richard Gordon.

During the hearing, Gordon said that he no longer backs the latest Cha-Cha efforts since it is being done at the tail-end of the Duterte presidency.

“Unfortunately, when we start doing it at the latter part of the term of any president, it becomes subject to question and scrutiny as to the real purpose of amending the Constitution,” Gordon said.

“And so therefore, I would like to make it on record that I am opposed to amending the Constitution at this time, precisely because we need to focus on many, many things that we need to do, not just the pandemic,” he added.

Other senators earlier questioned the propriety of pursuing Cha-Cha during the COVID-19 crisis.

‘Tinker knowledgeably’ with the Constitution

In the same hearing, former Supreme Court justice Adolfo Azcuna, also a Constitution framer, backed the revived push for Cha-Cha to precisely offset the effects of the COVID-19 crisis on the economy.

But he also told senators that the changes should be limited to the “flexible” economic provisions and should not extend to “bedrock principles” that are meant to protect Filipinos and the state’s patrimony and resource.

He cited the proposed Senate resolution’s “wrong placement” of the phrase “unless otherwise subsequently provided by law” on provisions governing the country’s sovereignty over its marine waters.

“I submit Mr Chairman that this is a wrong placement of the ‘unless otherwise provided by law’ [phrase] because that [means] a law can provide that the nation’s marine wealth and archipelagic waters will no longer be provided by the state,” Azcuna said.

“So it is very important when you tinker with the Constitution to tinker knowledgeably, Mr Chairman, and to know where to put this very important provision, ‘unless otherwise provided by law,’” he added.

Still, Azcuna believes it is “high time” to lift the restrictive economic provisions in the charter but agreed that amendments should be pursued carefully.

“If we try to resolve the economic impact of the pandemic without addressing the restrictive provisions of the Constitution, it’s like fighting with one hand tied behind your back,” he said. – Rappler.com