COVID FIGHT. Secretaries Roy Cimatu and Michael Dino meet with the officials of Bacolod City to help them in the coronavirus battle. Bacolod City PIO photo

Environment Secretary Roy Cimatu, the overseer credited for helping Cebu City contain its coronavirus outbreak, told officials of this city to bring the battle to the barangays.

“We are here to help Bacolod, help the people, help the mayor because Mayor sent a letter to the president asking for assistance, manpower, and other equipment including how to stop the rising cases in Bacolod,” Cimatu.

After his sterling accomplishment in Cebu, Cimatu was appointed by President Rodrigo Duterte as the implementer of the COVID-19 response in the Visayas.

He said it was necessary to bring down to the barangay level the fight to stop the spread of the highly-infectious SARS-CoV-2, the virus that causes COVID-19. And from there, the barangay captains do the rest.

He added: “This is the formula that we had adopted in Cebu.”

After Cebu, Cimatu heads to Bacolod to help with COVID-19 outbreak

Cimatu said that “the average cases here in Bacolod is 30, while during that time in Cebu it was 350 cases per day. But now, it’s 10 to 15 cases. Here 30, we can easily bring down, with the cooperation of the people.”

Bacolod Mayor Evelio Leonardia earlier sent an appeal to President Duterte to deploy here an augmentation team of 150 nurses, 20 doctors, and 30 medical technologists from the Department of Health (DOH) as an “emergency stop-gap measure,” before the city healthcare system collapses due to the steep rise in number of coronavirus disease patients. 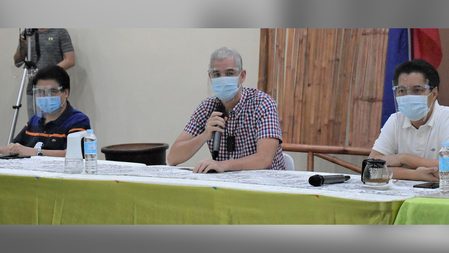 Dino said there is a formula, “it may not be a perfect formula for this COVID-19, but at least we have a very good plan for Bacolod. The help will be here very, very soon.”

Leonardia thnaked the Office of the President for the fast response to his appeal for help.

During the meeting, City Administrator Em Ang presented data on the current COVID-19 situation in Bacolod, including the number of cases per barangay, the status of operation centers, the implementation of lockdowns, and the molecular laboratory operations.

Ang also highlighted the lack of manpower in hospitals as one of the main problems that Bacolod was facing.

She said the hospitals have enough bed allocation for patients, but the number of healthcare workers – such as doctors and nurses – was dwindling. There were various reasons for the gap but it was mainly because of the fear of contracting the virus. Cimatu promised to consolidate all forces to help Bacolod City by undertaking the same actions they took in Cebu City, which was previously considered as the country’s COVID-19 epicenter.

Meanwhile, Governor Eugenio Jose Lacson, who met with Cimatu Wednesday night, August 26, said he was happy over the national government’s concern to the province.

“They want the people of Negros to feel that the national government is here,” he said.

He added: “It’s better to take the same action they did in Cebu for a lower number of positive cases. After 5 months, we have breached the 1,000 mark and 50% have already recovered.”

He said that the province did not reach the numbers of Cebu. When he showed Cimatu’s team the numbers, they said it was not that bad since it was lower than that of Cebu. – Rappler.com