MANILA, Philippines – Jose Maria “Joma” Sison, founding chair of the Communist Party of the Philippines, has died, the CPP announcement on Saturday, December 17. He was 83.

CPP spokesperson Marco Valbuena said in a statement that Sison died around 8:40 pm (Philippine time) on Friday, December 16, after two weeks of hospital confinement in Utrecht, the Netherlands. His death came barely 10 days before the 54th founding anniversary of the CPP on December 26.

“Even as we mourn, we vow continue to give all our strength and determination to carry the revolution forward guided by the memory and teachings of the people’s beloved Ka Joma,” he added.

Sison lived in the Netherlands as a political refugee since 1987. 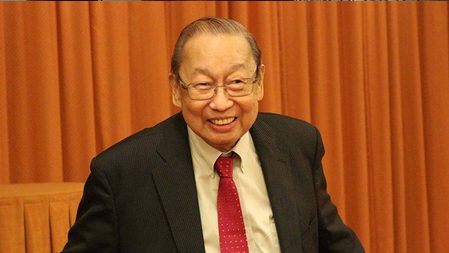 Sison founded the Maoist CPP in 1969, becoming one of the most significant political figures in the Philippines. The anti-subversion law, passed in 1957, declared the CPP and any affiliation to it illegal. Then-president Fidel Ramos repealed the law around four decades later, as peace talks with the National Democratic Front (NDF) began.

From prison to self-exile

Sison was among the political prisoners released by then-president Corazon Aquino in 1986, after the EDSA People Power Revolution that ousted dictator Ferdinand Marcos. He then left Manila for a lecture tour of Asia and Europe but was relentless in his attacks against Aquino, prompting her government to cancel his passport while he was in the Netherlands.

Retired general Jose T. Almonte said in a 2002 Newsbreak magazine interview that Sison at the time had asked him to convey his message to Aquino, “He asked me to tell Cory – as a matter of courtesy because she was the one who released him – that he was not returning to the Philippines and that he would lead the revolution from abroad.”

While he led one of the world’s longest running insurgencies, Sison also played a key role in its bitter split in the early 1990s that turned the communist movement into several factions, a shadow of its old self. In a party document, he ordered the cadres and guerrillas to return to basics and scoffed at the “military adventurism” that saw the expansion of the New People’s Army in the mid-1980s to early 1990s, such as the execution of high-profile attacks against government officials, military officers, government installations, including the assassination of an US Colonel James Rowe in 1989.

When then-retired general Fidel Ramos got elected president in 1992, he waved the olive branch of peace to Sison and his party through his key ally then, Speaker Jose de Venecia Jr.

Sison told Newsbreak in a 2002 interview from Utrecht that it was when De Venecia ran for president in 1998 that he started to seriously consider coming home to sign a peace pact with the government. “I was already issued a Philippine passport,” he recalled, adding however that the “hawks” in the Ramos government managed to “sabotage” the plan.

While dangling peace, Ramos also mounted a massive intelligence operation against the guerrillas from 1992 to 1998, which exploited their internal squabbles and infiltrated their top units – leading to the arrests of nearly the entire leadership of the CPP and what Ramos would then describe as the “irreversible decline” of the communist movement.

But the NPA managed to bounce back during the watch of of then-president Gloria Macapagal Arroyo, taking advantage of public discontent toward her through rapid organizing among the youth.  (READ: War with the NPA, war without end)

Sison broached the possibility of coming home following the election of Rodrigo Duterte in 2016, saying at the time, “The prospects (for peace talks) seem to be bright at the moment.” Sison was Duterte’s teacher at Lyceum University in the 1960s.

During the 2016 campaign, Sison and Duterte even had a video call and the two agreed to a ceasefire between government and communist rebels if Duterte won the presidency. The first few months of the Duterte presidency saw NDF consultants released from detention to join the peace negotiations in Oslo, Norway.

Duterte’s seeming romance with communist rebels was short-lived. By his second year in office, his government started the formal process of declaring the CPP-NPA as a “terrorist organization” (which a Manila court junked in September 2022). Later, he would ridicule Sison in public addresses, while Sison would call Duterte the “No. 1 terrorist” in the Philippines.

Vilification against the CPP-NPA was particularly revived during the administrations of Rodrigo Duterte and Ferdinand Marcos Jr. The Duterte administration had created the National Task Force to End Local Communist Armed Conflict, which led the crackdown on progressive groups by red-tagging them mostly on social media.

Human rights activists, students, journalists, and other critical voices have been red-tagged by the government in its anti-insurgency campaign, leading to killings of such individuals and a chilling effect on opposing forces. – With reports from Michelle Abad/Rappler.com