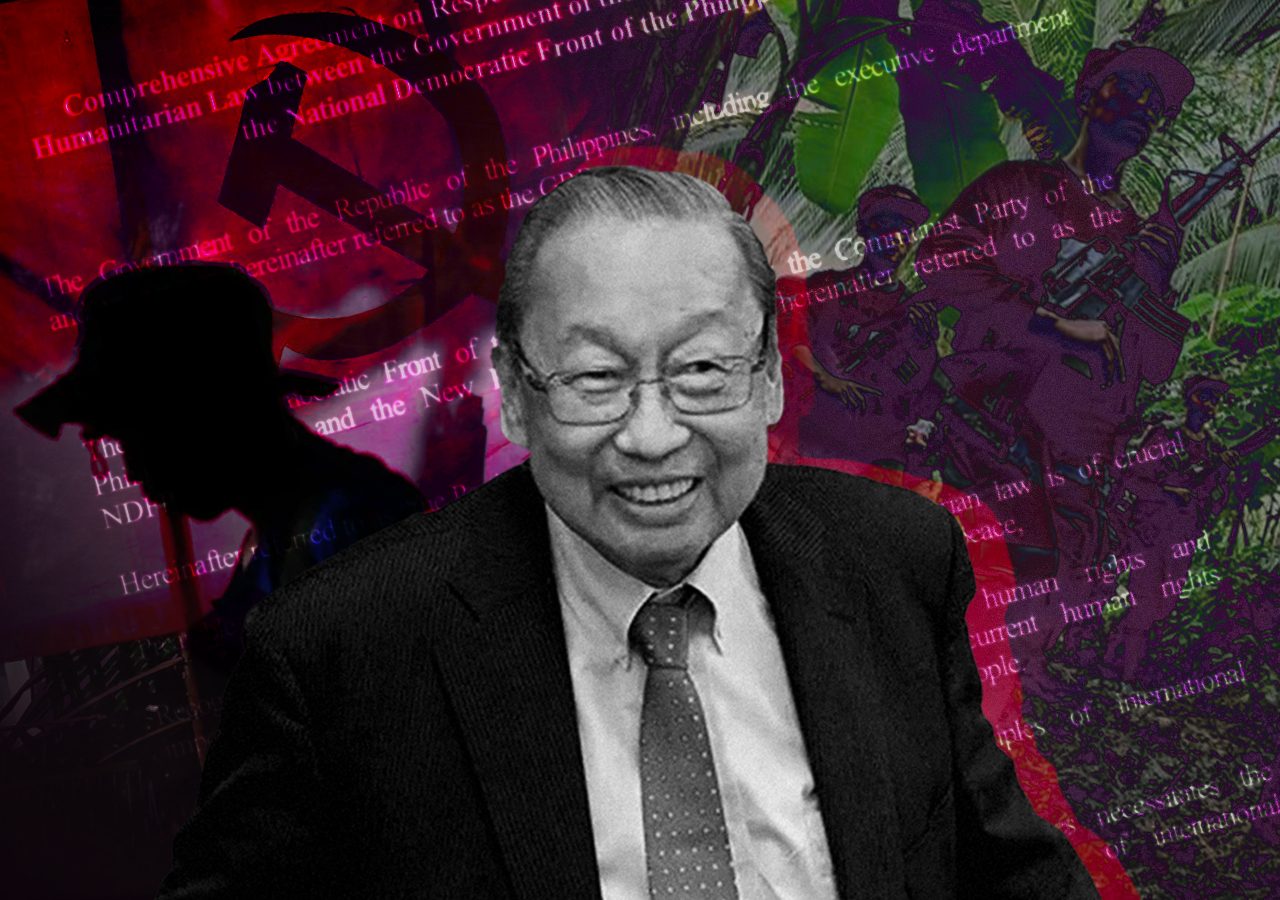 Facebook Twitter Copy URL
Copied
That his revolution has survived while many others have failed or fallen by the wayside is, perhaps, the best testament to his legacy

1. of an extent, amount, or intensity considerably above the normal or average.

2. of ability, quality, or eminence considerably above the normal or average.

1. an important or distinguished person.

How else to describe someone who, for 60 or so years, wielded the most influence on the country’s revolutionary and progressive social movements? Someone whose writings, organizational skills and ideological views would practically shape the history of the Philippine Left from the Cold War era to the multipolar world of today?

Joma never held a government post, never built a business empire, did not have any building, street or public monument to his name. He died an old and sickly refugee in a cold and faraway land. And yet he seemed omnipresent in every twist and turn of progressive politics since the 1960s, his ideas translating into organizational strength and political engagement of, by and for the Filipino masses.

Karl Marx saw nationalism as an unecessary distraction for the working class. But for Joma, national liberation was part and parcel of the revolutionary struggle for socialism in what he characterized as semi-colonial, semi-feudal Philippines.

Riding on the wave of successful socialist and national liberation movements after World War II, Joma’s call to continue the Katipunan’s unfinished revolution resonated strongly with the youth of his time. By the late 60s and early 70s, the Kabataang Makabayan he organized was at the forefront of the surging national democratic movement, infusing the nationalism of Bonifacio, Recto, Tañada, and Constantino with the ideas of Marx, Engels, Lenin, and Mao Tsetung.

He spearheaded the re-establishment of the Communist Party of the Philippines (CPP) in 1968 and the formation of the New People’s Army in 1969, breathing new life into a dying movement.

His most important treatise, Philippine Society and Revolution (PSR), became the bedrock of what is considered the longest running armed rebellion, a must-read for anyone who wants a deeper understanding of the country’s ills. It identified the main enemies as US imperialism, domestic feudalism and bureaucrat capitalism; described the oppressive and oppressed classes in Philippine society; laid down a strategy for a protracted people’s war; and detailed the political, military and united front tactics needed to overthrow the state, attain political power, and achieve national liberation towards socialism. Brilliant in theory and practice, Joma led and guided the armed revolution from its infancy to its full flowering. His Specific Characteristics of Our People’s War (1972), Our Urgent Tasks (1975) and other writings fine-tuned the revolution post-PSR. Through the years until his death, Joma’s writings and engagement on a whole range of issues – from art to zero carbon emissions – permeated the public sphere and profoundly influenced the entire spectrum of social and political movements.

Ironically, Joma was the communist party’s’ harshest critic. His Rectify Errors and Rebuild the Party, a stinging rebuke of the party’s leadership, caused the split of 1968. Twenty four years later, his Reaffirm Our Basic Principles and Rectify Errors, a gut wrenching summing up of the major errors and shortcomings of the CPP from 1980-1991, including the bloody internal purges in Mindanao, Metro Manila and Southern Luzon, sparked a flurry of debates and splits not only within the party but across the entire spectrum of the Philippine Left, dividing the national democratic movement into the RA and RJ camps.

These two “rectification movements” left the CPP leaner but more ideologically, politically and organizationally consolidated and ready for the battles ahead. In appreciation for Joma’s role, the CPP’s Second Congress in 2016 hailed him as a “great communist thinker, leader, teacher and guide of the Filipino proletariat.”

While a proponent of people’s war, Joma was also a firm believer in peace negotiations to address the roots af the armed conflict. He served as chief political consultant of the NDFP negotiating panel from 1995 to his death.

Negotiators from both sides swear that Joma was always instrumental in breaking deadlocks and resolving sticky issues through his well-crafted compromise formulations that both sides would find acceptable.

He played a key role in jumpstarting the official talks in 1995 and in the signing of many agreements, including the first of four substantial agreements – the Comprehensive Agreement on Respect for Human Rights and International Humanitarian Law (CARHRIHL) – in March 1998.

Joma longed for peace but totally rejected any form of surrender or capitulation, never budging on this point even if it meant stand-offs or prolonged suspensions of the formal talks. When then-president Rodrigo Duterte torpedoed the peace talks in 2017, Joma aired the hope of resuming talks with future administrations.

Joma shared his wisdom and experience not only to fellow Filipinos but to other progressives all over the world. The NDF office as well as Joma’s home in Utrecht became hubs for discussions and exchanges among activists and revolutionaries from Asia, Europe, North and South America. I’m told not a week would go by when there was no request for an interview, a speech, an essay, or an opinion on the burning issues of the day.

Joma was a key figure in the 1993 international seminar in Germany that reaffirmed Maoism as the third stage of Marxism-Leninism. He played a leading role in the formation of the International Conference of Marxist-Leninist Parties and Organizations in 1998.

In 2001, Joma founded the International League of People’s Struggles (ILPS) which serves as a coordinating center for anti-imperialist movements around the globe.

Rightist defenders of the status quo saw in Joma a threat to their existence, a terrorist no less.

Centrists who disagreed with his preferred mode of social change saw him as irrelevant and causing more harm than good.

Leftists who disagreed with his strategy and tactics saw him either as dogmatic or revisionist, depending on one’s ideological strand.

As an activist and revolutionary, Joma will be judged, ultimately, by how he managed to change the people and the world around him. By how his words and actions helped ordinary folk – workers, farmers, fisherfolk, urban poor communities, indigenous peoples, youth, women, and other sectors – assert their rights, fight oppression, and strive for a just and equitable society.

That his revolution has survived while many others have failed or fallen by the wayside is, perhaps, the best testament to his legacy.

He was great the way great revolutionaries are. – Rappler.com

An activist, the author served as representative of Bayan Muna party list.