MANILA, Philippines – Senator Cynthia Villar, who chairs the Senate committee on environment, natural resources, and climate change, lost her temper when reclamation projects were discussed during the budget hearing for the Department of Environment and Natural Resources (DENR) on Tuesday, October 11. 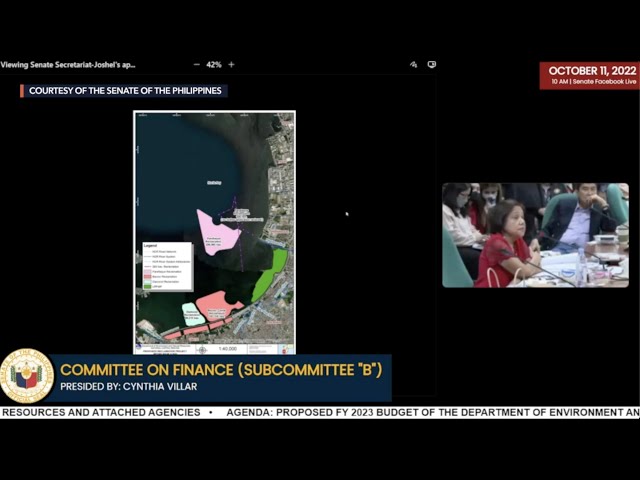 Villar fumed upon hearing that reclamation projects near the Manila-Cavite Expressway or CAVITEX received ECCs from the agency, claiming that she nor former President Rodrigo Duterte did not know about such projects.

“Ang kapal-kapal naman ng mukha ’nyo. Alam ’nyo nang babaha kami nang katakot-takot, ayaw ’nyo pang tigilan ’yan,” Villar said, referring to her home city of Las Piñas in southern Metro Manila. (How dare you! You all know that the reclamation projects would cause massive flooding in our area, but you wouldn’t stop.)

Villar said she had warned officials of the Bacoor city government in Cavite, which shares a border with Las Piñas, that the reclamation would cause six to eight meters of floods in her city.

Las Piñas has been ruled by Aguilar-Villar family for decades.

“It took me 10 years to clean my river so there will be no flooding, tapos sasarhan ’nyo ’yung daan ng river ko (then you will block the river passageway)?” Villar said, standing from her chair twice in anger. “I cleaned 30 kilometers of river, bakit hindi sasama ang loob ko (why wouldn’t I be mad)?”

Environment Secretary Maria Antonia Yulo-Loyzaga, appointed by President Ferdinand Marcos Jr., responded by saying that the agency would be revisiting its reclamation policies “as a whole” under the new administration.