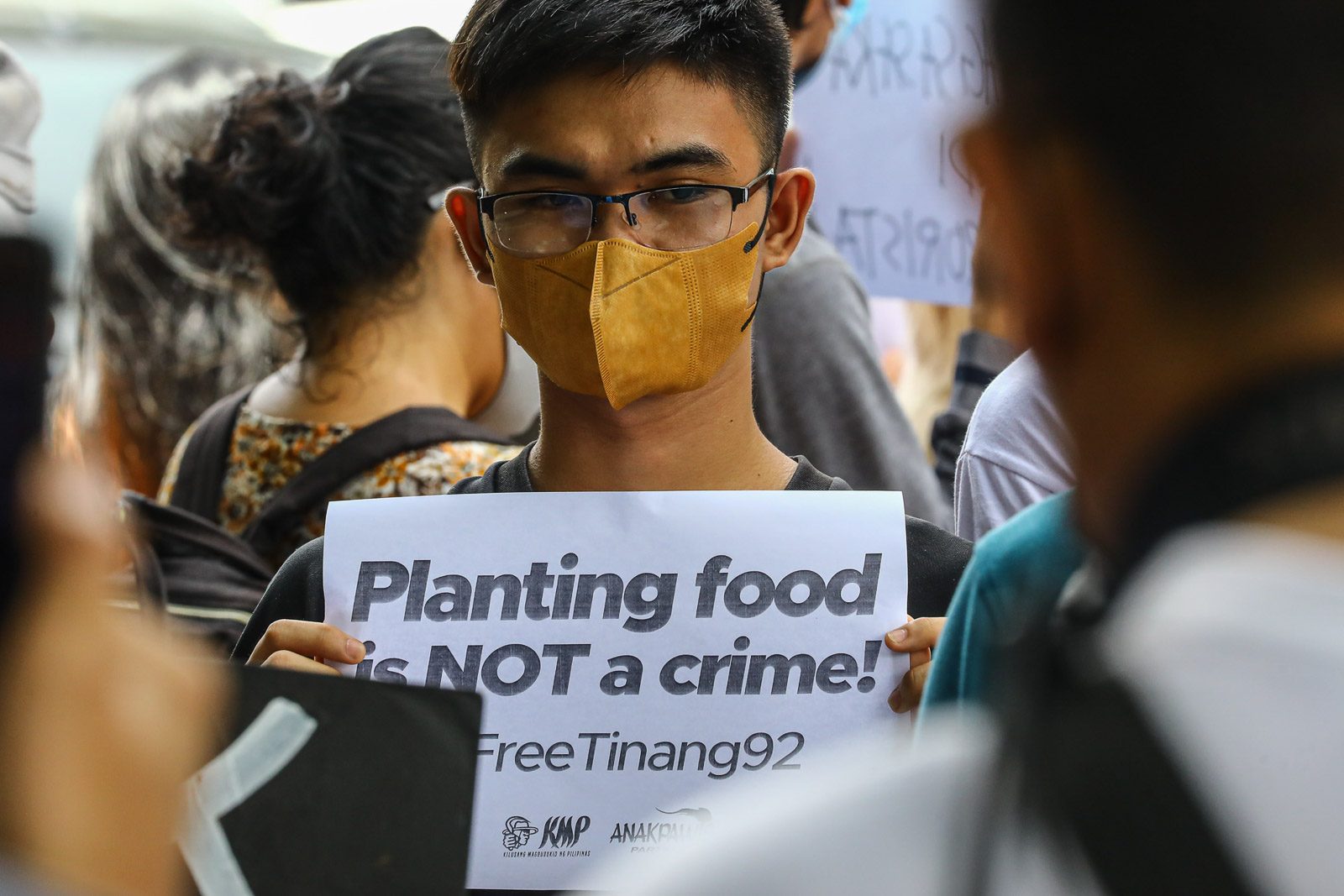 On the 34th year anniversary of the Comprehensive Land Reform Program (CARP), farmers groups and advocates staged a protest rally at the Department of Agrarian Reform headquarters in Quezon City on June 10, 2022, to condemn the arrest and demand the release of 92 farmers arrested in Tarlac on June 9. The Makisama-Tinang are the rightful holders of Certificates of Land Ownership Award (CLOA) issued to them in 1995 under the CARP.

CLARK FREEPORT, Philippines — The Department of Agrarian Reform (DAR) pledged on Monday, June 13, to help 13 farmers among the more than 90 individuals arrested on June 9 as activists tried to till land long promised to sugar workers.

At the same event, DAR Undersecretary David Erro, the head of the Task Force Tinang Tarlac (TFTT) created by Cruz, said that at least nine of the 93 farmer beneficiaries had coordinated with his office plans to cultivate the land to commemorate the 34th anniversary of the Comprehensive Agrarian Reform Program (CARP).

The farmers said they would be tilling unplanted land, the DAR official added. While he warned them against possible legal repercussions, Erro admitted, “hindi ko inexpect yung aresto-aresto na yan.” (But I didn’t expect those arrests.) More than 90 individuals were arrested and detained by the Concepcion town police office on June 9. While some were released the following day, 83 persons – including farmers, land reform advocates, artists, and journalists – spent three days in detention before their release on Sunday, June 12.

Lawyer Jobert Pahilga of the National Union of Peoples’ Lawyers said the latter group paid a total of P1.2 million bail, with P13,500 for every individual facing complaints of illegal assembly and malicious mischief, plus a processing fee of P1,000 per person.

Pahilaga said cops had tried to resist the judge’s release order, citing prosecutors’ claim that the judge erred, but eventually agreed to free the activists.

In a report sent to Rappler, Cruz said a group called Makisama Tinang led by one of the beneficiaries, Felino Cunanan Jr., admitted plowing with the use of a farm tractor or rotovator a 5,000-square meter portion of land planted with sugarcane.

But one of those arrested, writer/artist and Unyon ng mga Manggagawa sa Agrikultura (UMA) volunteer Angelo Suarez, told Rappler the police reneged on a negotiated agreement with activists to halt the bungkalan (tilling) but continue with the solidarity program.

The DAR promised to provide certification to the 13 farmers through its provincial agrarian reform program officer in Tarlac. But Erro clarified that  even though one is identified as a beneficiary, they can still be disqualified as a premature entry if they are not yet formally installed.

Cruz said these farmers will undergo another round of validation to qualify as beneficiaries of the disputed land in Hacienda Tinang.

(After the validation, we will publish this and if nobody opposes, or seeks inclusion or exclusion, we will bring the collective Certificate of Land Ownership Award (CLOA) to the registry of deeds, and install them).

Erro said the 200 hectares was issued to 236 agrarian reform beneficiaries (ARBs) through a collective CLOA. While the document is under the name of one farmer, the names of all beneficiaries are listed on the back of the title, the DAR official said.

Erro said the task force already conducted a validation on May 23 to 25 with all 236 beneficiaries present.

Cruz said the case in Hacienda Tinang was one of his priorities on assuming office.

The DAR chief said he did not know why the process of awarding of the land and installation of the beneficiaries had taken so long.

Cruz chided activist groups for using farmers for their political agenda and said Vice President Leni Robredo, who spoke up for the those arrested, may have been misinformed.

Many were not farmers, Cruz said in Filipino. “There were students, foreigners, artists who were arrested, so that means others rode on the issue, instigated and organized,” he pointed out.

Robredo, a pro bono human rights lawyer before entering politics, worked for more than a decade helping farmers, including those from indigenous tribes, to fight for their ancestral land. She was one of the lawyers of the Sumilao farmers of Bukidnon who eventually reclaimed their land from San Miguel Corporation.

Gi Estrada, the media liaison of UMA, also told Rappler that in the long history of agrarian struggle, farmers were more vulnerable to assaults by private armed groups of state forces in the absence of solidarity from other sectors.

Peasants and agricultural workers are among the poorest sectors of society and even in other countries, they have always sought solidarity to highlight their plight and push their campaigns, Estrada said. – Rappler.com