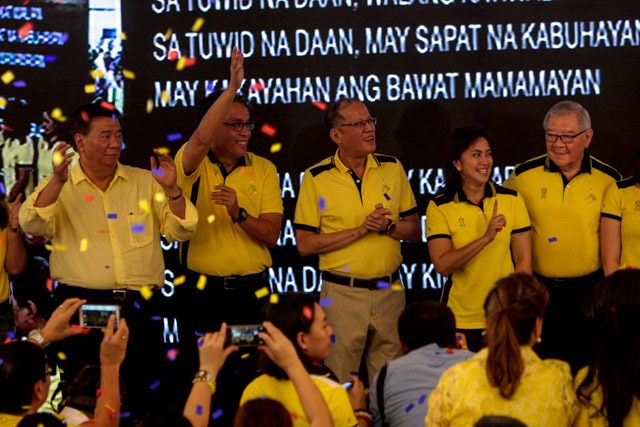 Facebook Twitter Copy URL
Copied
The Liberal Party cancels its scheduled announcement of its senatorial bets on Friday, October 9. This has been moved to next week.

LAGUNA, Philippines – For the 3rd time, the ruling Liberal Party (LP) has moved its scheduled announcement of its full 12-person Senate slate.

The LP was first set to declare its slate on September 28 during its National Executive Council (NECO) convention. The party later moved the date to September 30, but only its standard-bearer and 4 senate bets were nominated that day.

The announcement of the full slate was again moved to October 5, but the party eventually decided to announce only its vice presidential candidate, Camarines Sur Representative Maria Leonor “Leni” Robredo.

During that event, President Benigno Aquino III himself said the party would have a full slate by Friday, October 9, the new schedule for the announcement. “While there are those having trouble putting together their coalitions, we are whole,” he said then in Filipino

But the LP now needs one more week to finalize its slate. The new schedule of its announcement is October 12.

“The decision of [Francis Tolentino] to withdraw from consideration” and “to enable Quezon City Mayor Herbert Bautista additional time for reflection and to consult with his family” were the reasons given on Thursday, October 8, by the LP for its postponement.

Metropolitan Manila Development Authority (MMDA) Chairman Francis Tolentino, who was set to run for senator under the ruling LP, was earlier dropped from the slate following the scandal involving his alleged hiring of an all girls group for an LP event.

A source privy to discussions of the LP said the postponement was because the slate remained incomplete even before Tolentino had withdrawn.

So the party had 3 vacant slots as of Thursday. – Rappler.com