OUT. Senator Bong Go formally withdraws his candidacy for president on December 14, 2021.

Go personally filed his statement of withdrawal with the Commission on Elections (Comelec) on Tuesday, ending two weeks of waiting as to when he would formally throw in the towel.

“As a matter of principle, wala na po ako sa karera sa pagtakbo bilang pangulo ngayong 2022 (I’m no longer in the presidential race for 2022),” Go said in an ambush interview.

Go was referring to the announcement of his withdrawal from the race on November 30, saying he did not want Duterte to strain himself just to campaign for him in next year’s vote. 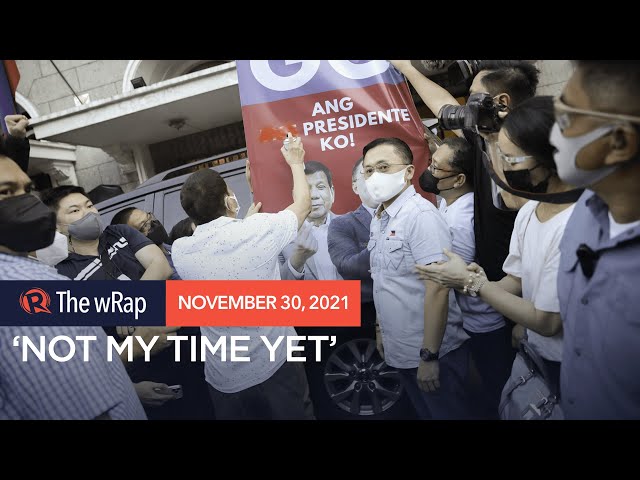 Go first filed his candidacy for vice president in October under Energy Secretary Alfonso Cusi’s faction of the ruling PDP-Laban, but withdrew from the race when Duterte’s daughter, Davao City Mayor Sara Duterte-Carpio, filed her candidacy for the country’s second top post in November.

He then filed his candidacy for president under Pederalismo ng Dugong Dakilang Samahan via substitution, although he made hints in subsequent weeks that he was considering dropping out of the race due to developments ahead of 2022.

The older Duterte has even taken a swipe against the late dictator’s son, calling him a “weak leader.”

In a statement, the Cusi faction of PDP-Laban said it will endorse “whoever will align with the policies of the Duterte administration.”

Meanwhile, Senator Manny Pacquiao said Tuesday that the public should respect Go’s decision, adding that he is now the only Mindanaoan running for the presidency.

(I’m now the only Mindanaoan and Visayan running for the presidency. Who else would Mindanaoans and Visayans support? Of course, those who hails from the same place as them.) – Rappler.com