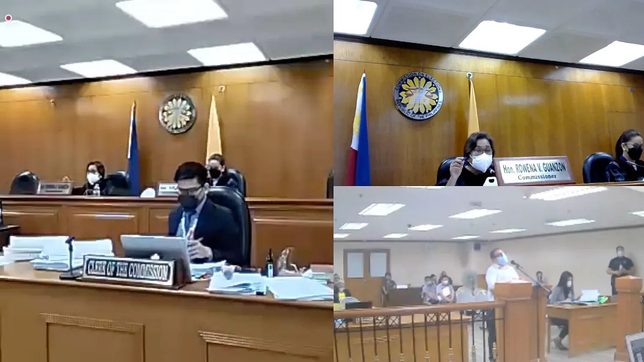 DIALOGUE. Comelec holds a preliminary conference on the disqualification cases against Ferdinand Marcos Jr. on January 7, 2022.

Facebook Twitter Copy URL
Copied
The Marcos camp is unable to immediately present a medical certificate, and even then, Guanzon asks, 'Why was it hard for Marcos to go on video?'

Commission on Elections (Comelec) Commissioner Rowena Guanzon did not hide her frustration after the camp of 2022 presidential aspirant Ferdinand “Bongbong” Marcos Jr. failed to immediately provide a medical certificate proving that the former senator was incapable of attending a dialogue on the disqualification cases against him on Friday, January 7.

The feisty poll official presided over Friday’s preliminary conference, a Comelec proceeding where both parties in each petition were given the chance to formulate issues based on their appreciation of the case.

The Marcos camp told Guanzon that the late dictator’s son could not attend the meeting via Zoom because he was under the weather.

“He is sick. Okay, where is his medical certificate?” Guanzon asked Marcos’ counsel. “Why was it hard for [former] senator Marcos to go on video? He can do that on his phone.”

Marcos’ lawyer Hanna Barcena replied, “Last night, a physician saw him and they will issue a medical certificate within the day.”

Barcena manifested that she can legally represent her client, as the December 20 summons issued to him stated that only the respondent or his authorized counsel must be present during the preliminary conference.

But Comelec Clerk of the Commissioner Genesis Gatdula later said that the summons issued on December 29 required the counsel and the parties to take part in the proceedings.

At the end of the meeting, Marcos’ camp was finally able to provide a virtual copy of his medical certificate, which indicated that the presidential contender had a low-grade fever and sore throat as of Thursday, January 6.

“[Marcos] reportedly had direct contact with two individuals who later tested positive,” the medical certificate said, as read by Gatdula.

One of those individuals was Marcos’ spokesman Vic Rodriguez, he confirmed to reporters an hour after the preliminary conference.

What else happened during the preliminary conference

While the streamed preliminary conference was about the Marcos cases, it was also undeniably a showcase of the larger-than-life persona of Guanzon, who is known for her no-holds-barred questioning and biting comments against individuals she clashed with.

During the proceeding, she grilled lawyers over issues presented in the case.

For instance, the petitioners’ counsel noted that Marcos had a 1995 tax conviction, which was at the forefront of most of the petitions against his 2022 Malacañang bid.

Asked whether they admit this issue, Marcos’ counsel answered in the negative.

This prompted Guanzon to say, “How come you appealed to the Court of Appeals if [Marcos] was not convicted?”

After Barcena clarified that Marcos was convicted but made an appeal, Guanzon said that meant the issue was admitted.

Other issues raised during the meeting include whether Marcos filed his income tax returns, and whether he paid fines and deficiency tax for the conviction.

What cases were tackled, and what happened after

Both camps were given until Sunday, January 9, to submit their memoranda or final position papers via email.

A third disqualification petition against Marcos under the Comelec’s 1st Division – the one filed by a faction of Partido Federal ng Pilipinas – was immediately submitted for resolution on Friday after the petitioner and his counsel skipped the preliminary conference. – Rappler.com