Marcos camp: Comelec has no jurisdiction over petition to cancel COC 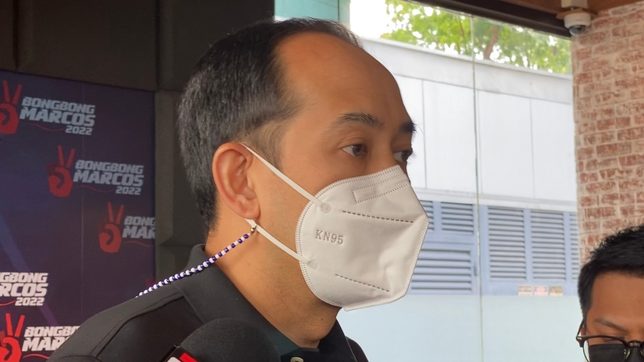 NO JURISDICTION. Bongbong Marcos' spokesperson Vic Rodriguez tells reporters on November 16, 2021, that the Comelec has no jurisdiction over the petition to cancel COCs.

Facebook Twitter Copy URL
Copied
The deadline for the Marcos camp to file an answer is this week, with the preliminary hearing set on November 26

The camp of former senator Ferdinand “Bongbong” Marcos Jr. claimed that the Commission on Elections (Comelec) has no jurisdiction over the petition seeking to cancel the candidacy of the presidential aspirant.

This is among the answers of the Marcos camp – which said it has “a lot of legal experts on board” – in response to the petitions to cancel the candidacy of Marcos.

“The petition should be immediately dismissed because there’s no jurisdiction…. The Comelec has no authority to pass upon more so annul or review the decision of the Court of Appeals,” said Marcos’ spokesperson Vic Rodriguez on Tuesday, November 16.

The two petitions filed so far are framed this way: the 1997 conviction of Marcos by the Court of Appeals (CA) for failure to file income tax returns from 1982 to 1985 is a clear ground to disqualify him from running for public office, and he misrepresented that in his COC.

The exclusive ground to cancel one’s COC is misrepresentation. The two petitions say that when Marcos indicated he was eligible to run, and that he had not been found liable of an offense that perpetually disqualified him from running for public office, he committed misrepresentation.

There’s actually no prayer in both petitions to annul the CA decision.

“You read the petition. In essence, they want Comelec to annul the petition of the Court of Appeals. It is clear in their petition,” said Rodriguez, who repeatedly mentioned retired Supreme Court senior justice Antonio Carpio.

It was Carpio who had written in a column that the tax code was clear that an offense like failure to file an ITR should have led to a prison sentence. A prison sentence is crucial because the Omnibus Election Code disqualifies someone who had been sentenced to more than 18 months.

But the petitions mainly argued that the tax code imposes perpetual disqualification on any kind of tax offender, including failure to file an ITR – no matter the penalty.

“It is worthy to note that the perpetual disqualification from holding any public office, to vote and to participate in any election under Section 252 of the 1977 tax code (now Section 253 of the 1997 tax code, as amended) is an inevitable consequence of the mere fact of conviction, and is not dependent on the penalty actually imposed,” said the petition filed by civic leaders represented by former Supreme Court spokesperson Ted Te.

The petition in intervention filed by the group of 1Sambayan convenor Howard Calleja had the same argument.

The Calleja petition in intervention has to be accepted by the Comelec first because they filed past the deadline. A motion to intervene was attached to the petition, which has to be granted by the commission.

The summons issued by the Comelec to the Marcos camp was for the Te-led petition, and their deadline to submit their answer would be this week. The preliminary conference is set on November 26.

Rodriguez refused to say for now who the counsels on record would be, but said “without exaggeration, around 500 lawyers volunteered their service for us.”

“Kanyang binasang personal at masusing inaral ‘yung basurang petisyon, and with our legal team and a lot of legal experts on board, at nakita namin na talagang basura ‘yung petisyon,” said Rodriguez.

(Marcos personally read the trash petition and studied it carefully, and with our legal team and a lot of legal experts on board, we saw that the petition is really trash.)

Marcos, in a separate statement on Tuesday, said “all pieces of evidence and legal arguments in our hands clearly show that the petition against my candidacy is nothing but trash.”

No matter what the Comelec decides, which spokesperson James Jimenez said should be issued before the year ends, the petition is expected to reach the Supreme Court because the losing party will expectedly appeal.