Facebook Twitter Copy URL
Copied
Jinggoy Estrada announces he is part of the Senate slate of 'Uniteam,' or what Bongbong Marcos and Sara Duterte call their tandem 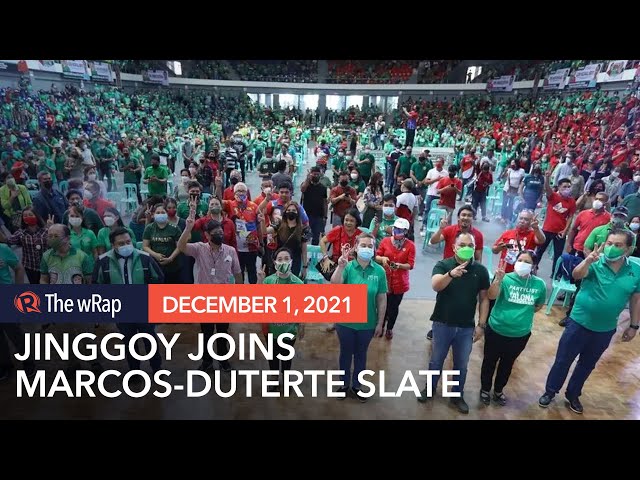 Plunder defendant and former senator Jinggoy Estrada said on Wednesday, December 1, he is the latest to join an incrementally-announced Senate slate of Ferdinand “Bongbong” Marcos Jr and Mayor Sara Duterte.

“I am very fortunate to be included in the slate of Bongbong Marcos and Sara Duterte,” Estrada said in a speech Wednesday morning in Lucena City, in Quezon, where he joined the tandem in several stops across the province.

To date, the Marcos-Duterte tandem, which they call “Uniteam,” has not officially announced a complete Senate slate yet. The first to be officially announced was former presidential spokesperson Harry Roque, whose record as a human rights lawyer includes pushing for a law to institutionalize the indemnification of Marcos atrocities during Martial Law.

In another event in Lucena later that day, Marcos campaigned for Estrada, short of confirming that his fellow former senator was part of the slate.

(I worked with him in the Senate and we saw that in his long years of service, he had a good record of passing laws that helped people, but unfortunately he was a target of our friend in Malacañang back then, so his career took a different turn.)

Estrada is out on a P1-million bail, having won a bail petition at the anti-graft court Sandiganbayan, helped by the precedent set by the Supreme Court in acquitting former president Gloria Macapagal-Arroyo of plunder. She was with them in Lucena that morning.

(We will all help each other to bring him back to the Senate so he can serve once more.)

Former Senate president Juan Ponce Enrile, the dictator Marcos’ Martial Law architect and implementer, has also thrown his support behind Marcos. Enrile, like Estrada, is also out on bail over pork barrel plunder charges. The Supreme Court’s humanitarian bail grant for Enrile was part of the basis why the Sandiganbayan also granted post-conviction bail to Imelda, Bongbong’s mother, while she appeals her guilty verdict on seven counts of graft.

Senator Bong Revilla, one of Lakas-CMD’s leaders, has been cleared of all criminal charges related to his pork barrel.

Tying these figures together is Marcos-time solicitor general Estelito Mendoza, who represented Revilla, Arroyo, and Enrile in their plunder charges. Now, Mendoza is defending Marcos against petitions in the Commission on Elections (Comelec) seeking to block his candidacy.

(It’s an honor for us, for me, to be included because we can see the reception of the people not only here in the province of Quezon but in the entire country, the reception is really warm for Bongbong Marcos and Sara Duterte.) – Rappler.com