Negros Occidental was a laboratory of conflict during the 20-year Martial Law regime of the late president Ferdinand Marcos. Today, the province is emerging as a petri dish for political campaign tactics as his son, former senator Ferdinand “Bongbong” Marcos Jr., battles Vice President Leni Robredo for the presidency.

The three-point caravan here on Sunday, November 21, had fewer numbers than those in Luzon. But two groups, Silent Majority BBM 2022 and the Negros for BBM Movement, displayed two different approaches to organizing for Marcos.

In an interview with Rappler, Silent Majority BBM 2022 leader Aurora Blanca gave a glimpse into an alternative campaign tack for Marcos. Blanca’s thousand-strong group has pledged to focus on non-confrontational outreach projects.

“Today, I just told everyone, let’s enjoy the activity,” she said after the caravan disbanded.

There were festive drumbeaters like in earlier caravans for Robredo. But there was a group that blared “Bagong Lipunan” – the song most associated with the late dictator’s Martial Law regime – as it wound its way through Bacolod.

Ryan Remigio, member-coordinator of Team BBM 2022, told Rappler in a phone interview that the head count came from both the provincial police and event organizers.

The caravan lasted for seven hours, spanning at least 98 kilometers. It took off in Paoay town after Governor Matthew Marcos Manotoc and Vice Governor Cecilia Araneta Marcos greeted the riders.

The original plan was only for 30,000 individuals who pre-registered to join the activity, Remigio told Rappler. By the day of the caravan, at least 300 motorcycle associations participated.

“Nagulat nga kami (We were surprised) when many people who did not register joined. We cannot deny them that…as everybody was welcome,” said Remigio.

A crush of thousands of riders also cruised through Abra province, 152 kilometers from Paoay.

There was a substantial middle-class component in the Bacolod caravan: couples smiling and waving from SUVs, bicycle-riding college youth, and professionals in branded sports clothes.

Most Marcos followers are tight-lipped. Several in Luzon and the Visayas told Rappler they are “not authorized” to answer questions.

Blanca said peers agreed on speaking about their perspective.

Her “independent” group differs in character from the other major group, Negros for BBM Movement. 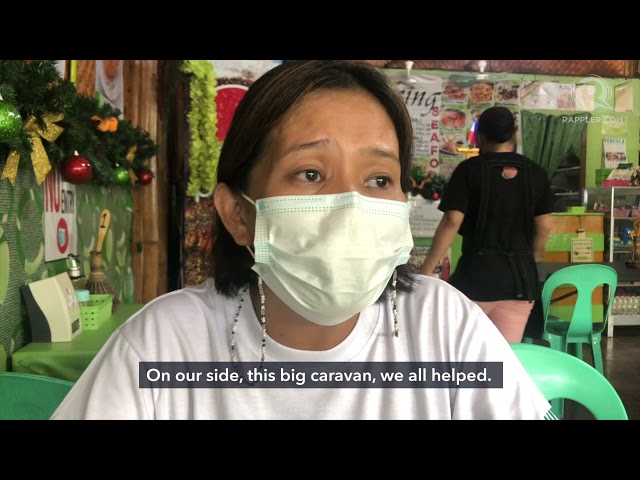 Silent Majority has rawer photos, taken by members. Its tone is like that of a nongovernmental or civil society organization. Negros for BBM shows a slew of semi-professional productions. The comments on its posts have more snark than on Blanca’s pages.

Blanca’s group calls itself a people’s initiative movement, “a parallel group” to enlighten the electorate. It pledges “to be vigilant with the intramurals of political operators serving their interests,” and “to avoid mudslinging, bickering, false promises, deceit, and lies.”

Blanca told Rappler her first pro-Marcos volunteers were teachers and policemen who could not speak out because of their jobs.

The Silent Majority members don’t argue on walls. “We limit our opinions to our group chats,” Blanca said.

The private group chats are powerful communication channels. Any news that has to do with Marcos sparks an animated discussion. “Just among ourselves; we’re also the ones who justify, according to what we know,” she told Rappler.

From the original 250-person chat group, Blanca has added a few more. Key individuals in these chat groups have also formed their own subgroups.

The fastest-growing groups come from the youth, with subgroups from different schools and areas in the province. It is this sector that came up with many outreach plans that will fill their schedules until 2022, Blanca added.

Blanca’s group members share some similarities with Robredo supporters in Negros Occidental. They are tired of political brawls on their walls. They focus on expanding their reach, person by person, as representatives of their presidential bet.

Yet a big chasm divides these groups.

Robredo supporters celebrate the fierce opposition here against the Marcos regime. They remind Filipinos of atrocities like the Escalante Massacre of 1985, and massive corruption by Marcos cronies that crippled the sugar industry and led to mass hunger among sugar workers.

Asked how she felt about the historical facts, Blanca replied, “I don’t look at that anymore,” in the local Ilonggo language.

“I have also seen the [post-Marcos] administrations that we also believed in. So now, I am giving [my trust] to BBM,” she added.

For opponents of the Marcoses, that might look like a defensive strategy for the indefensible. Blanca and other Marcos fans, however, believe that shrugging off historical “baggage” could break the gordian knot of never-ending strife. – Rappler.com