Comelec spokesman James Jimenez briefs the media at the start of the filing of certificates of candidacy at Sofitel's Harbor Garden tent in Pasay City, October 1, 2021.

Facebook Twitter Copy URL
Copied
In the next few weeks, the poll body will screen the aspirants to determine 'nuisance candidates' who must be removed from the list

Ninety-seven Filipinos aspiring to succeed President Rodrigo Duterte submitted their certificates of the candidacy before the Commission on Elections (Comelec) during the week-long COC filing from October 1 to 8, the poll body reported on Friday, October 8.

That number was a decrease from the record-high 130 COC filers for president in the 2016 elections.

Among the notable names who threw their hat in the 2022 presidential race include:

There were 29 people who filed their COC for vice president, an increase from the 19 aspirants during the 2015 COC filing.

Notable aspirants in the lineup include:

There were also 176 senatorial aspirants who filed their COCs, and 270 party-list groups that submitted their list of nominees.

Here’s the final tally of COC filers for local posts:

In the next few weeks, the poll body will screen the aspirants to determine “nuisance candidates” who must be removed from the list.

The Omnibus Election Code describes nuisance candidates as those who are trying to “put the election process in mockery or disrepute or to cause confusion among the voters by the similarity of the names of the registered candidates or by other circumstances or acts which clearly demonstrate that the candidate has no bona fide intention to run for the office.”

The Comelec, however, has reiterated that nothing is set in stone until the November 15 substitution deadline.

This year’s COC filing has seen a change in tradition due to strict COVID-19 protocols. In past election cycles, the week-long event was usually festive and a massive spectacle.

“In general, we can say the conduct of the filing of COCs has been successful across the country even amid the pandemic,” Comelec Chairman Sheriff Abas said in Filipino. – Rappler.com 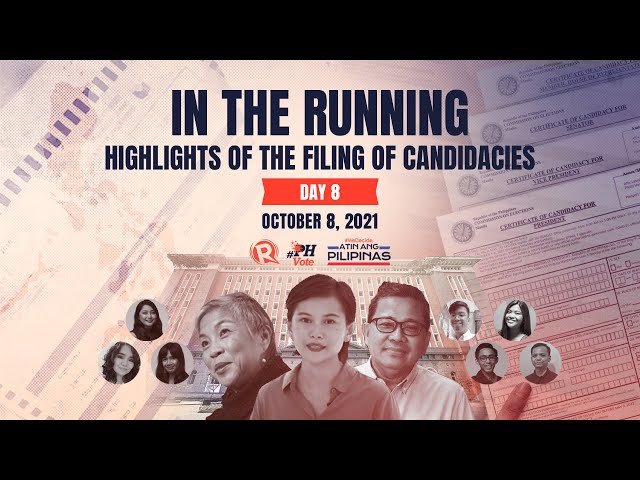