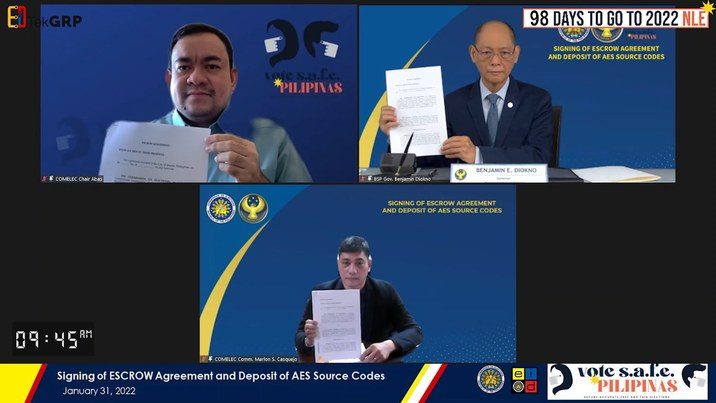 SIGNED. Comelec and BSP officials sign an agreement to safeguard the election software that will be used to automate the 2022 polls.

MANILA, Philippines – The Commission on Elections (Comelec) and the Bangko Sentral ng Pilipinas (BSP) signed a memorandum of agreement on Monday, January 31, for the safekeeping of the source code or the final election software that will be used to automate the 2022 elections.

The agreement is in compliance with Republic Act No. 9369, which requires the Comelec to deposit the source code in escrow inside a highly secured vault at the BSP.

“The signing of escrow agreement is the first of two parts. This is the first part, the second is the actual turnover,” Comelec Executive Director Bartolome Sinocruz Jr. told reporters on Monday.

Comelec Commissioner Marlon Casquejo said there is no fixed schedule yet for the turnover.

The upcoming deposit of the source code in escrow in the BSP is to make sure that there is a copy of the election software which will not be open to tampering.

“It only proves that our source code will not be hacked, contrary to other people’s claims. To our countrymen, this is an assurance that there will be no vote-padding or vote-shaving, unlike in manual elections in the past,” Comelec Chairman Sheriff Abas said in a mix of English and Filipino.

The source code from the vault will only be extracted when there is “a [court] order, in case there is an [election] protest,” BSP Governor Benjamin Diokno said.

The signing of the agreement came two weeks after the Comelec came up with new versions of the software to be used for the automated polls, in an effort to address glitches encountered during the mock polls in December 2021.

On January 13, two of the three components of the automated election system were subjected to another trusted build, a process which basically converts the source codes – which are written in a human-readable programming language – into an executable file that computers can interpret. – Rappler.com