ASR. In a press briefing, poll watchdog Lente presents results of a study on the abuse of state resources during the campaign period.

Facebook Twitter Copy URL
Copied
The Legal Network for Truthful Elections (Lente) is leading a monitoring study on the abuse of state resources, which it describes as first of its kind in the Philippines

MANILA, Philippines – A poll watchdog flagged the misuse of government resources by politicians during the campaign period, and asked the Commission on Elections (Comelec) to do more on the matter.

The Legal Network for Truthful Elections (Lente) is leading a monitoring study on the abuse of state resources (ASR), which it described as first of its kind in the Philippines.

It said initial results from its study found that people had a difficult time identifying instances of abuse of state resources. Only 28% of 161 respondents across 17 vote-rich areas covered by the research were able to point out whether government resources were misused.

The election code classifies as an offense the use of a government-owned vehicle for election campaign. As a general rule, it also prohibits civil service employees, policemen, and soldiers from engaging in partisan political activity.

“If there is ASR, the incumbent official has the advantage. It’s a problem because it makes the playing field uneven,” Lente executive director Ona Caritos said in a press conference on Tuesday, April 26.

“Our respondents said they were scared candidates will get back at them if they identify these politicians as those who use state vehicles during the campaign period,” added Lente’s Marisse Aldeza, who worked on the study.

Lente however acknowledged that the definition of abuse is broad, but it plans to use its findings as a guide when it knocks on Congress’ doors and lobby for a more refined legal framework for ASR. 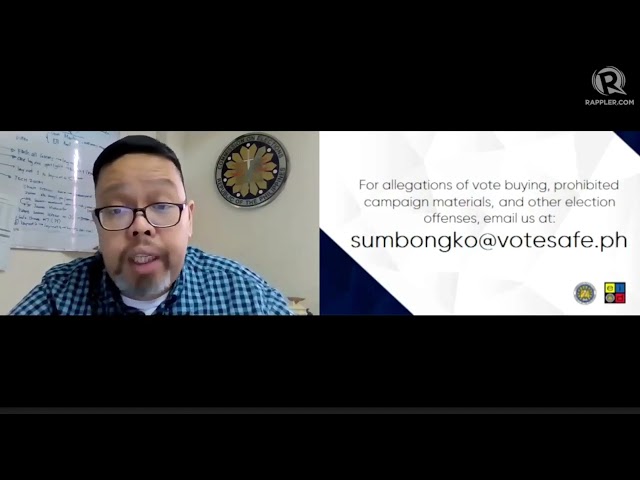 The watchdog appealed to the Comelec, which recently formed a task force to go after vote-buying offenders on their own, to “adopt the same attitude towards abuse of state resources.”

“It’s not a simple problem, and it’s not easy to file a case because of security concerns, but it’s really incumbent for the Comelec to be more proactive, to exercise their motu proprio power to investigate reports of allegations of abuse of state resources,” Caritos said.

Lente encourages the public to also reach out to them at lente.philippines@gmail.com if they have monitored government vehicles being used for campaign purposes. – Rappler.com