‘We can’t be onion-skinned’: Comelec welcomes protests over election woes BRIEFING. Comelec Commissioner George Garcia speaks during a press conference on Monday, May 9.

MANILA, Philippines – The Commission on Elections (Comelec) acknowledged that it cannot be sensitive to criticisms of how it handled the May 9 vote.

This was in the wake of demonstrations mounted outside the Comelec headquarters in Intramuros, Manila, on Tuesday, May 10, amid allegations of election fraud.

“That’s okay. The Comelec cannot be onion-skinned. That is why we are facing the public and explaining to them,” Comelec Commissioner George Garcia said in an ambush interview on Wednesday, May 11. “The public’s condemnation is welcome, we should accept it.”

Technical woes marred the conduct of the consequential May 9 vote, with over 500 vote-counting machines and 200 SD cards found to be defective.

While the numbers represent only less than a percent of the total, the glitches affected thousands of voters, who fell in line outside polling precincts for hours.

Some voters also refused to waive their right to personally feed their ballot into the VCM, after poll workers gave them the option to have their ballots batch-fed by electoral board members by end of the day.

Partial, unofficial results of the 2022 elections show that dictator’s son Ferdinand Marcos Jr. is the winner of the presidential race, with a wide margin over his closest rival, Vice President Leni Robredo.

The fast transmission of the results led some Robredo supporters to doubt the integrity of the elections.

They found suspicious the trend that Robredo’s votes had consistently accounted for 47% of the former senator’s, once clustered precincts began transmitting election returns to Comelec servers past 7 pm on Monday. 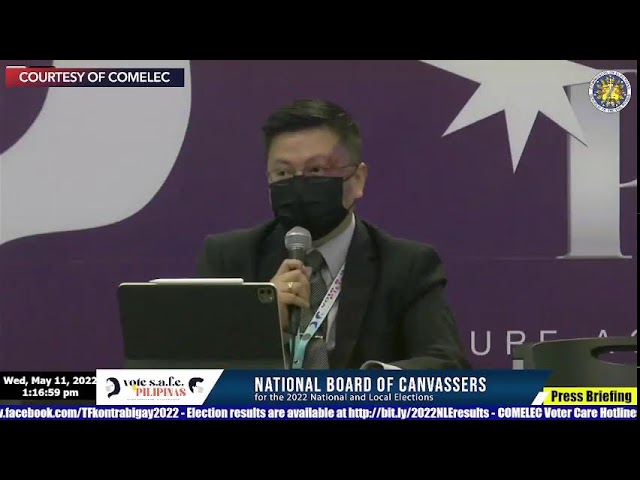 But the Comelec explained the transparency server accepts results from all over the country, not from a specific bailiwick.

It was also the same phenomenon observed in 2013, which can be attributed to the law of large numbers: the larger the sample size, the more it approximates the characteristics of the entire population.

The Comelec also said it is difficult to prove claims of automated election rigging.

“Our system went through certification, we had a local source code review. How can you insert such a percentage to hand a win or loss to a candidate?” Comelec Commissioner Marlon Casquejo had said. – Rappler.com