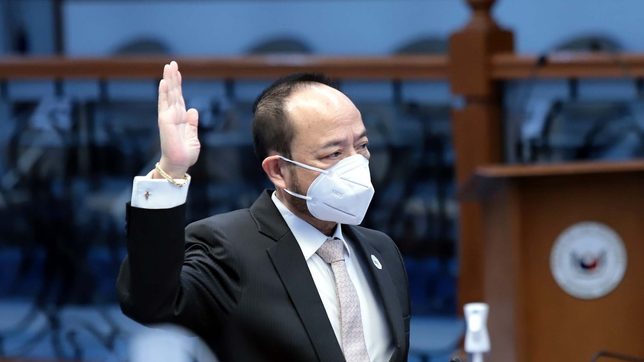 BULAY ATTENDS CA HEARING: Rey Echavarria Bulay takes his oath before answering questions from members of the Commission on Appointments’ (CA) Committee on Constitutional Commissions and Offices Wednesday, December 1, 2021. The committee deliberated on the nomination of Bulay as commissioner of the Commission on Elections (Comelec) for a term expiring on February 2, 2027 to replace former Comelec Comm. Luie Tito Guia who retired in February 2020. Bulay, a San Beda College alumnus and Manila chief prosecutor, served as commissioner of the Presidential Commission on Good Government. ()

Facebook Twitter Copy URL
Copied
Manila chief prosecutor Rey Bulay is the fratmate of President Duterte, who has so far filled six of the seven posts in the Comelec en banc

His appointment comes at a crucial time when the poll body’s chairman and two other commissioners are set to retire in February 2022, three months away from a high-stakes national elections that would determine President Rodrigo Duterte’s successor.

Bulay, a seasoned politician with over a decade of experience in the Muntinlupa city council, sat through two hours of interview by lawmakers, who received him warmly despite their tough questioning.

In his speech, Bulay pitched himself to lawmakers as someone who understands the need for the Comelec to be independent because of his stint in local government politics.

He answered in the affirmative when asked by Senate Minority Leader Franklin Drilon on whether he was in favor of a piece of legislation that would prohibit local government units (LGU) from granting allowances to independent offices.

(I was a councilor when our LGU issued vehicles and allowances to election officers. So how can they maintain their independence?)

Senator Aquilino Pimentel III also asked him about his stance on political turncoatism.

He also said he supported measures that would allow the Comelec to set the candidate’s spending limit per registered voter, and adjust it regularly based on economic conditions and inflation.

For the 2022 elections, the aggregate amount a candidate may spend for an election campaign is still the same as stipulated in a 1991 law.

“Until the last November 2021 [Comelec] resolution, the present commission still espouses the same rates [as in 1991], so we have a lot of things to do,” Bulay added.

Drilon also asked him to explain his unaccounted net worth increase of P13 million based on his financial documents from 2017 to 2020.

Bualy said some of them were inherited wealth from his parents, who died in 2020, as well as due to the increase in the market value of some of his properties.

Why he wants to be part of the Comelec

Bulay said he was hesitant at first to apply to the poll body due to the country’s current political landscape.

“When all these developments came with the President’s daughter, and Senator Bong Go lately, I didn’t want anymore to go to the Comelec because of all the political ruffles that I didn’t know will happen,” Bulay said, alluding to the apparent infighting among Duterte’s close allies.

But he told lawmakers he wanted to be among those who would protect the “will of the people,” meaning their votes.

“It affects the entire country from the highest official to the lowest, from the elite down to the masses kung magkamali ng pipili ng magpapatuloy sa eleksiyong ito (if we pick the wrong person to oversee the polls),” he said. “I want to be part of [the elections] by safeguarding their votes.”

Before his stint as Manila chief prosecutor in July 2020, Bulay was a commissioner at the Presidential Commission on Good Government, the government agency tasked to recover the ill-gotten wealth of late dictator and former president Ferdinand Marcos Sr.

Bulay is expected to join the Comelec 2nd Division, which is handling at least three petitions that seek to bar dictator’s son Bongbong Marcos from running for president in 2022.

Bulay is the fratmate of Duterte, who has so far filled six of the seven posts in the Comelec en banc.

On Wednesday, the poll body spokesman welcomed the CA’s confirmation of Bulay’s appointment.

“We already briefed him on a lot of the work that is being done with the Comelec, and we expect that it will be a very smooth transition for him,” Comelec Spokesman James Jimenez said. – Rappler.com