Marcos Jr. gets TUCP support, but labor agenda still in the works Facebook Twitter Copy URL
Copied
'I will have to put the lay out in detail because the issue has become so involved,' the presidential candidate tells labor leaders 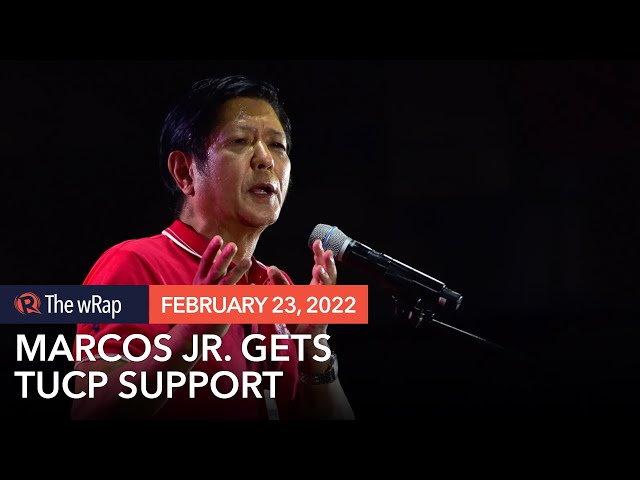 MANILA, Philippines – Presidential frontrunner Ferdinand “Bongbong” Marcos Jr. has secured the support of the Trade Union Congress of the Philippines (TUCP) but his labor agenda is still in the works.

In a press release on Wednesday, February 23, Marcos Jr. said he would study how to further amend the anti-endo bill so it protects the interest of laborers.

(We need to thoroughly study how to amend so it protects our workers, and it passes into law.)

During the DZRH presidential interviews last January 25, Marcos Jr. said he would address the problem of contractualization by talking to company owners who, he said, are “friends.”

(For sure, if we talk to them – they are my friends – let’s tell them, for the system to be fair, make workers permanent and change the system.)

On Wednesday – a month after the DZRH interview – Marcos Jr. mentioned enacting a law, but the fine print of the version of the law he said he would prioritize is still vague. He only said that labor-related government agencies need to be streamlined.

(I will have to put the layout in detail because the issue has become so involved. There are a lot we need to fix; there’s a lot to fix structurally. We need to streamline the agencies, because there are too many offices, and our workers are confused which to go to.) The issue is clear for labor leaders – the Labor Code allows subcontracting. Article 106 of the Labor Vode prohibits labor-only contracting. In theory, a company cannot outsource the labor to workers to avoid paying their statutory benefits.

But subcontracting is a longtime practice because there is a loophole in the Labor Code. Article 106 defines labor-only contracting when the contractor does not have substantial capital or investment in the form of tools, equipment, machinery, work premises, among others.

In 2019, lawyer Allan Montaño, a Labor Win senatorial candidate, said the solution could be as simple as changing “or” to “and” in the definition of labor-contracting under Article 106, so that contractors are required to have both substantial capital and investment. That way, labor-only contracting would be avoided.

The House of Representatives under President Rodrigo Duterte passed its anti-endo bill on third and final reading in December 2020, or the proposed security of tenure act, but progressive lawmakers opposed this version, saying it still provides legal cover to hire seasonal employees.

A much earlier version of that bill was vetoed by Duterte in July 2019, paving the way for the latest version that the House passed in December 2020.

“Marcos also expressed interest in making into a priority bill the Security of Tenure Act, which aims at amending the Labor Code to further protect workers’ rights by prohibiting labor-only contracting in the private sector,” said the press release from the Marcos campaign team on Wednesday.

The TUCP said its support for Marcos Jr. is based on caucuses among its ranks.

The TUCP drew flak in 2020 when it turned around on its stance on the ABS-CBN franchise issue – its representative in the House, Raymond Mendoza, voted to deny the network its franchise renewal, resulting in the lay-off and retrenchment of thousands of its workers. (READ: Sectoral groups vow to remember how House panel voted on ABS-CBN franchise)

According to the Marcos campaign, Mendoza “conformed with Marcos’ plans to streamline agencies.”

Rappler has reached out to TUCP spokesperson Alan Tanjusay for a follow-up. We will update this story once he responds. – Rappler.com