In show of force, Marcos to launch campaign that scares Martial Law survivors 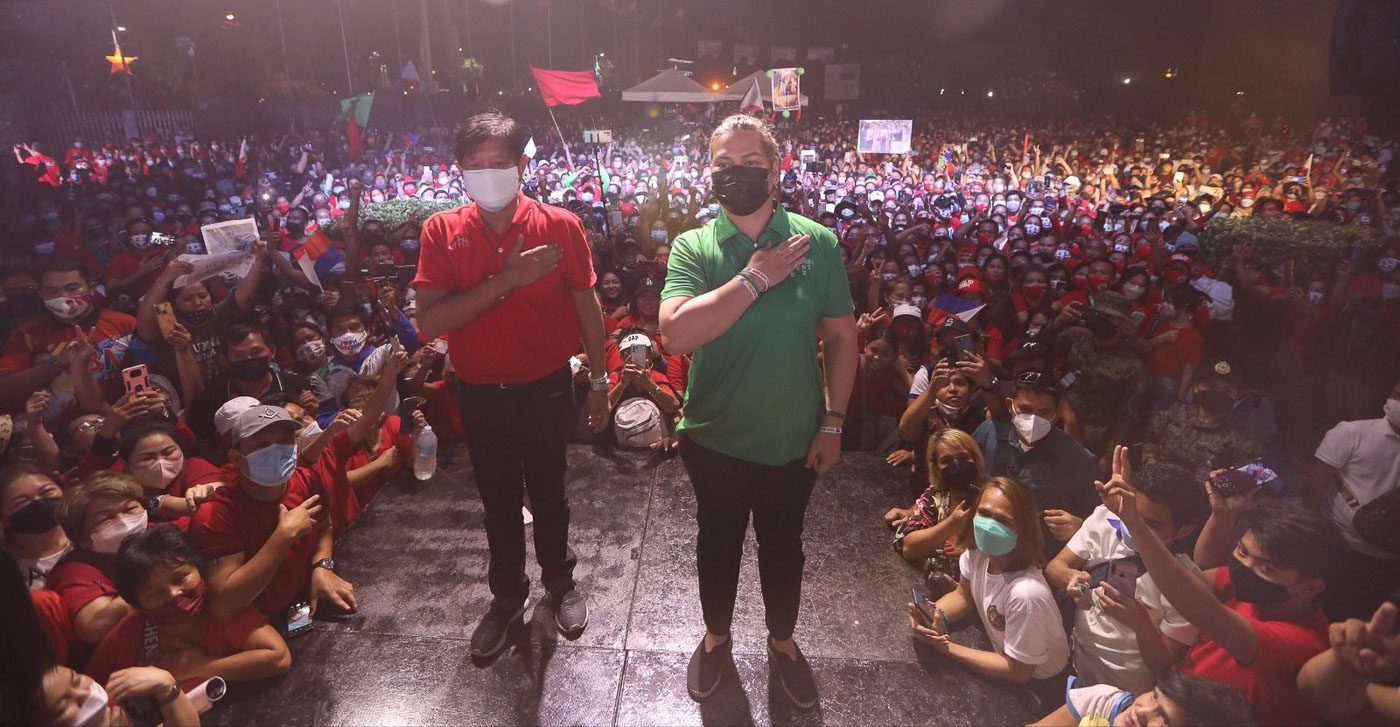 SORTIE. The Marcos-Duterte team in Cavite on December 9, 2021. Photo courtesy of UniTeam Alliance/Lakas-CMD

Facebook Twitter Copy URL
Copied
For Marcos and Duterte, their narrative is not only unity but the strong support they have been getting

MANILA, Philippines – In what is described as the world’s largest indoor arena, Ferdinand “Bongbong” Marcos Jr on Tuesday afternoon, February 8, will show that he is not just the frontrunner in pre-election surveys but in the count of warm bodies as well.

Marcos and his running mate, presidential daughter and Davao City Mayor Sara Duterte, will officially kick off their campaign for the May 2022 elections at the Philippine Arena in Sta. Maria, Bulacan, which is owned by the bloc-voting Iglesia ni Cristo. They expect a crowd of 25,000, as the 55,000-seater arena will operate in half capacity in observance of health protocols during the pandemic.

Marcos’ numbers scare the survivors of his father’s Martial Law regime. He himself does not acknowledge the established numbers of Amnesty International that show the extent of destruction of that period: 70,000 detained, 34,000 tortured and 3,240 disappeared presumed to be dead.

“I do not know how they generated their numbers. Let us ask Amnesty International to share the information they have,” Marcos said in an interview with entertainment host Boy Abunda on January 25.

The numbers he knows are these: 53% in the last survey, and 25,000 supporters expected to fill the Philippine Arena to proclaim him.

A slew of disqualification cases have been filed against Marcos, many of them by Martial Law survivors. One petition said they are banding together “to resist the illegal attempt to run for President of the Philippines and to re-establish the abusive Marcos family and their cohorts’ control of its government.”

In an interview with One PH, a miffed Marcos said “how many questions do you need to ask [about martial law] that have not been asked, and how many answers need to be given that have not been given before, so why are we doing this?”

Marcos’ close ally and political kingpin Chavit Singson has said Filipinos have grown tired of these criticisms, and are actually boosting the son’s underdog appeal.

Marcos, in a recent interview with Korina Sanchez, maitained his self-styled brand of a unifier and said he does not want an “us vs them” situation.

“People acknowledge that the message we’re putting across, that of unity, is what we need. If you don’t like me, then help in your own way. not unite politically, but let’s unite in that we will help Filipinos,” said Marcos in a mix of English and Filipino.

Marcos said “by presenting the best plan, the best ideas, by showing them I’m sincere and I want to unify,” he will try to convince Martial Law victims to support his government when he wins. “What else can I do?”

His archrival, Vice President Leni Robredo, rejected the unification offer and said reconciliation has to be rooted in justice. Ill-gotten wealth cases remain pending, and the recovered funds go partly to farmers whose taxes were stolen by the Marcos government and its cronies.

Another presidential aspirant, labor leader Leody De Guzman, will even launch his campaign at the  Bantayog ng mga Bayani in Quezon City, a site built in honor of Martial Law martyrs.

Bibeth Orteza, a student activist during Martial Law, has joined coordinated efforts to campaign against Marcos. She said in a recent forum she can consider moving on from the abuses of dictatorship, but the fear of a Marcos government and a potential vice president Sara Duterte government are more bothersome for her, citing pronouncements by the candidates that they will follow in the footsteps of their parents.

For Marcos and Duterte, dubbed as UniTeam, the strong show of support for them is the bigger narrative.