Moreno, in an interview with entertainment host Boy Abunda aired on Thursday, January 27, was asked to give reasons why Filipinos should not vote for the other presidential aspirants.

“Dilawan” and “pingklawan” are derogatory terms used to refer to supporters of the Liberal Party or Robredo whose campaign color is pink.

Why vote for Isko?

Asked why then voters should choose him instead, Moreno promised he would not premise his governance on the need to exact vengeance on political enemies.

The 47-year-old Manila mayor vowed to devote all his energies to solving major challenges like the pandemic and economic recovery. (READ: Isko Moreno: The new enemy of ‘moralista,’ ‘disente’ politics)

(With the many problems we have, we need real solutions and fast action. That I can do in my own little way.)

What Moreno sees as acts of vengeance, Robredo’s supporters see as steps to hold the Duterte administration accountable for abuses and failures.

Moreno’s messaging is consistent with his speeches during his visits around the country where he strives to portray himself as a political outsider bringing a breath of fresh air to a scene dominated by a few powerful families. 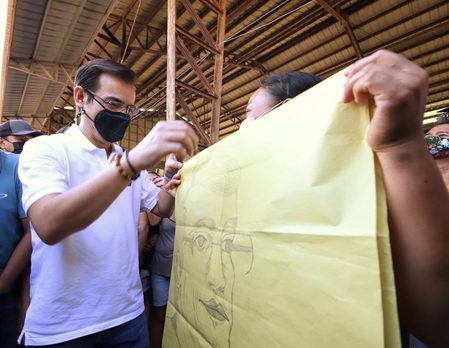 Lacson and Pacquiao, like Moreno, were among the aspirants Robredo engaged in talks with in the hopes of unifying to secure a non-administration victory in the upcoming national elections.

The two have also fared slightly worse or at par with Moreno in recent vote preference surveys, surveys which were topped by Marcos, and, at far second place, Robredo.

All candidates were asked by Abunda to comment on their rivals, in a segment of his presidential interviews called “Political Fast Talk.”

Robredo, in her interview, said Moreno shouldn’t get the Filipinos’ vote because his stance on various issues is unclear. Lacson gave just one response for all his rivals, telling Abunda he wouldn’t vote for any of them simply because he was running for president. Marcos refused to answer the question directly, saying he wasn’t into “negative campaigning.” The interview with Pacquiao is yet to air. – Rappler.com