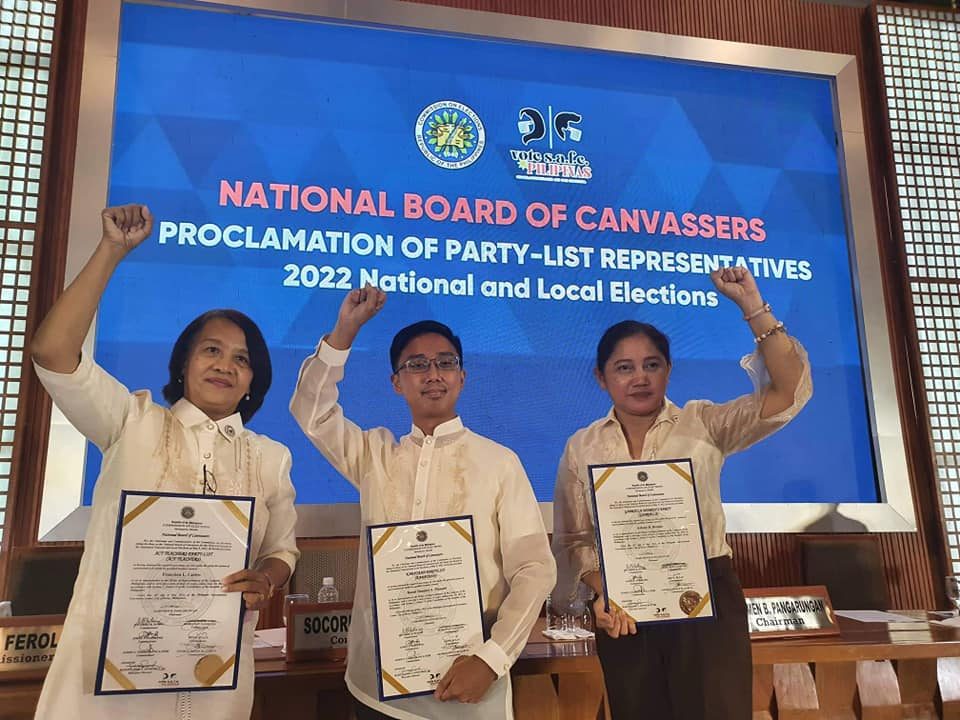 Facebook Twitter Copy URL
Copied
Bayan Muna fails to get a seat in the House of Representatives for the first time since 2001, while Kabataan Partylist gets a record increase in votes in the 2022 elections

MANILA, Philippines – President Rodrigo Duterte on March 30 spent the first 15 minutes of his two-hour weekly public address talking about the communist insurgency and how it allegedly slipped into Congress through the party-list system.

Before the first five minutes were done, the President already ratted off party-list groups he accused of being communist fronts: Kabataan, Bayan Muna, ACT Teachers, and Gabriela Women’s Party, and all members of the progressive Makabayan bloc at the House of Representatives. He said they wanted to end the government as it was.

These allegations coming from Duterte are nothing new, but are part of a broader rhetoric and actions from his administration under the guise of ending communist insurgency. These groups and their members, especially community organizers, have been red-tagged and harassed for years.

But Duterte’s March 30 address, where he also accused left-leaning groups of infiltrating international bodies, came at a crucial time. It was a little over a month before the May 9, 2022, elections, the perfect opportunity for Duterte and his allies to carry out what they had long wanted to do: Remove the Makabayan bloc from Congress.

The results of the May 9 polls reflect the fruition of the Duterte government’s long-running effort to malign and harass progressive groups. From six seats in the 18th Congress, the Makabayan bloc is set to occupy only three seats in the incoming 19th Congress – one each for Kabataan, ACT Teachers, and Gabriela.

Bayan Muna suffered the biggest loss in its two-decade history of participating in the party-list elections. It will not have a party-list seat in the House of Representatives in the incoming Congress after consistently winning since 2001. Outgoing Bayan Muna Representative Carlos Zarate attributed the 2022 election results to intensified efforts from the government. The Duterte administration, he said, operated on the fact that Bayan Muna won big in the 2019 elections.

Defying intensified red-tagging from the government, Bayan Muna won three seats in the 2019 elections while its votes increased almost 50% to 1,117,403 from 2016’s 606,566. It ranked second among all party-list groups that joined the elections that year.

“Usually after elections, we consolidate our forces, but here comes the pandemic, hindi ka makalabas (you can’t go out), and the Duterte administration took advantage of that,” Zarate said in an interview with Rappler on Tuesday, May 31.

Zarate himself has been insulted and threatened by Duterte in his public speeches. In December 2020, the President admitted to digging up documents and other information on the legislator and his family, particularly his son.

Duterte’s public pronouncements go hand-in-hand with the actions of the National Task Force to End Local Communist Armed Conflict (NTF-ELCAC) and the President’s other allies in the form of disqualification cases. (READ: Which party-list groups is NTF-ELCAC trying to get disqualified?)

The Makabayan bloc also became the target of massive disinformation fueled by state-backed propaganda machines online. In fact, a few days before the May 9 elections, a fake document circulated online which stated that Makabayan bloc party-lists and senatorial candidate Neri Colmenares were disqualified due to their alleged communist links. The Commission on Elections denied issuing this resolution. Legal battles and the massive disinformation efforts are on top of the real-life threats and harassment experienced by members and community workers under progressive groups aligned with the Makabayan bloc. Their names and faces have been plastered on posters and tarpaulins across the Philippines, branding them communist and recruiters.

These threats often results into arrests and, worse, deaths. Rights group Karapatan monitored at least 427 activists and grassroots organizers killed between July 2016 and December 2021. Meanwhile, the group also recorded at least 1,161 people arrested and detained within the same period.

Zarate said their members, especially those residing in areas where Bayan Muna enjoyed massive support, were subjected to psychological warfare and other forms of harassment. One of those slain was Bayan Muna Iloilo coordinator Jory Porquia, who was shot dead by unidentified men in Iloilo City on April 30, 2020.

(Our constituencies were really affected, and we did try to recover even with our limited resources, but these were not enough to counter government attacks.)

The hostility entered a new level as the campaign season started. Kabataan and its volunteers – usually between the ages of 15 to 24 – experienced firsthand how the toxic situation online translated into real-life threats.

Quezon City coordinator Carmi Garcia recalled one incident where a group of people became hostile and yelled at volunteers who were peacefully campaigning.

(They were yelling at us and telling us that we’re terrorists and we’re wasting taxpayers’ money. When we went back the following day, all of our posters were gone, they had removed them.)

A person who identified himself as a soldier, meanwhile, physically confronted Kabataan Pasig City coordinator Ivan Sucgang while he was out handing out fliers in a local market.

“Sinusundan talaga ako sa palengke at nagsisigaw na huwag kaming iboto kasi communists daw kami,” Sucgang said. (He was really following me inside the market and yelling that people should not vote for us because we’re communists.)

Despite these threats, the tireless campaign of the youth sector for Kabataan proved to be effective. Among all Makabayan-aligned party-list groups, it is only Kabataan that marked an increase in votes.

For incoming Kabataan representative Raoul Manuel, the favorable results shows that the Filipino youth are ready to fight back.

(The youth proved that we would not bow to threats and attacks. The corrupt and abusive officials are afraid of critical youth that’s why they did their best to remove us from Congress, but they failed.)

For Thalia Villela, Kabataan’s national campaign team lead, the government’s mishandling of the pandemic, as well as other issues, helped open the eyes of many to what the party-list group had done and could do in Congress.

(The pandemic magnified how important every decision of leaders is, that it’s really a matter of life and death, of every Filipino’s survival.)

Political analyst Arjan Aguirre, a political science instructor at the Ateneo de Manila University, said the huge increase in votes for Kabataan during the 2022 elections show that the youth sector is “becoming more and more politicized.”

“They want to be represented in the government, and they know how to spot the real youth partylist group from what is not,” he told Rappler. “I hope more groups will emerge in the future to cater to the diverse youth population.”

What’s next for Makabayan?

The ascension of the dictator’s son Ferdinand Marcos Jr. to the presidency triggers more fears for the democratic institutions in the Philippines that have yet to recover from the Duterte administration. All things considered, the road ahead for the opposition looks rougher than how it was the previous years.

Can the incoming roster of opposition legislators increase and strengthen their influence in the coming years? For Aguirre, it is possible “if they can be a real opposition in the legislature.”

“They should learn how to engage issues that really matter [and] avoid falling into the trap of being too distracted with so many issues, making themselves spread too thin, foreclosing that substantial or needed engagement that would really matter in terms of democratic institutions, processes, and outcomes,” he said.

Reelected Gabriela Representative Arlene Brosas, however, looks forward to continuing their work on pro-people policies. Aside from legislation that will benefit and protect women and children, she said they would proposed bills that would push for free land distribution, end contractualization, and increase minimum wage across the Philippines, among others.

(Even if Makabayan bloc’s seats have gone down to three from six, that’s still three voices for the marginalized sectors of our society. But what’s important is we stand our ground, remain principled, independent, and we have a consistent voice in Congress.)

The reality remains that there is still no indication that the government will cease its attacks. Kabataan and Gabriela are in fact still facing unresolved cases filed by NTF-ELCAC, seeking to nullify their accreditations. These are on top of constant vilification from the task force, which released a statement in as recent as May 2022, stating that its work against the progressive party-list groups that managed to get reelected “is not done.”

The Makabayan bloc is ready to counter these attacks, but Brosas emphasized that the NTF-ELCAC is operating with the goal of suppressing not just progressives but any form of dissent in the Philippines. The real opposition, after all, can be felt outside the hallowed halls of Congress.

(Their effect on people is to make them avoid talking, complaining, basically telling them not to dissent nor have an opinion that is against the government, which is very tyrannical and dictatorial.)

Manuel, the representative-elect of Kabataan, said they expect an increase in attacks, as well as an intensified legal battle, especially with the election outcome. But if the number of votes they garnered is any indication, the youth is determined to continue fighting historical revisionism, the increase in disinformation, and other anti-people policies under the administration of the dictator’s son.