BACK TO BACK CAMPAIGNS. Marcos Jr., the survey front-runner, and Vice President Robredo barnstorm Marawi a day apart.

Facebook Twitter Copy URL
Copied
The incumbent governor wants to look forward and not to the past. Young people and educators say that should not be the case at all.

MARAWI CITY, Philippines – It was March 31, a few days before the start of Ramadan, and the Islamic City of Marawi was bursting with activity. The roads leading to the provincial capitol were almost at a standstill as people in mostly red, and sometimes green, shirts, made their way to the gymnasium for one of two major political rallies that week.

It didn’t take long for the gymnasium to be filled to capacity. Luckily, the provincial government came prepared: there was a spillover area made specifically for those who couldn’t make it inside.

It was a big day for Mamintal “Bombit” Alonto Adiong Jr. and his allies across Lanao del Sur. That day, he made official the alliance with presidential front-runner Ferdinand “Bongbong” Marcos Jr., son of the late dictator.

That day, Lanao cheered his and Sara Duterte’s name.

A few kilometers away, at a village a few meters past the city’s welcome arc, a group of volunteers – most of them young – were also busy. On April 1, Vice President Leni Robredo, who had won in Lanao del Sur in 2016, was going to pay a long overdue visit to the war-torn city.

(It was a lot of pressure on our part because I told myself: “My goodness, we’re going up against a Goliath in our governor. We’re just Filipinos from the fringes.)

Luckily for Tinara-an, the events did not happen on the same day.

As hands were raised and loyalties were proclaimed at the provincial capitol, volunteers were busy putting in the final pink touches at Area 7 in Barangay Sagongsongan.

It would have been unthinkable a few years back for Marcos Jr., former senator, to be greeted with such glee in Marawi City. There is history, after all – both decades-old and recent.

Under the regime of the elder Marcos, the 2022 presidential candidate’s father and namesake, parts of Mindanao turned into virtual killing fields. There are numerous massacres to speak of but it’s one tragedy, the Jabidah Massacre of 1968, that galvanized the movement for Moro self-determination.

It was the slaughter of Muslim trainees in Corregidor that led Tingara-an to learn more about her people’s struggles. Tingara-an, then a student at Xavier University in Cagayan de Oro, was tasked to report on the Jabidah Massacre for a history class. Despite being Maranao and Muslim herself, she hadn’t heard about the massacre until university.

“As I was reading about it and I learned about it, naramdaman ko ‘yong hirap. At saka ‘yong pasakit na dinaanan ng mga kasama nating Moro,” she recalled. (I felt the pain. I felt the suffering our fellow Moros went through.)

Poverty rates in Muslim Mindanao are often seen as a legacy of the Marcos years – the result of decades of slaughter, destruction, voicelessness, displacement, and neglect.

It’s said – particularly by supporters of Marcos Jr. – that the sins of the father aren’t those of the son. But the son himself has a bad record of dealing with and receiving the concerns of Muslim Filipinos.

In 2015, a large crowd gathered in Marawi to protest what many considered a “watered down” v​​ersion of what was then the Bangsamoro Basic Law. Marcos Jr., then chief of the Senate committee on local government, had filed the substitute bill, citing the supposed lack of consultation with other sectors in and around Muslim Mindanao.

Now senatorial bet Samira Gutoc, in a 2015 Mindanews report, said protesters carried with them a tarpaulin with the faces of the two Ferdinands and the words, “Jabidah Massacre to BBL Massacre” below their faces.

After the Adiong show of force for the Uniteam wrapped up, Marcos Jr., in a chance interview on the sidelines of another campaign stop in Bukidnon, said he wouldn’t prioritize Marawi’s rehabilitation anymore, since President Rodrigo Duterte was already “finishing it.”

Marcos Jr. did not expound on what “finishing it” (tinatapos na) meant, but five years on, ground zero – where a months-long battle was waged after ISIS sympathizers tried to take over the city – is far from rehabilitated.

While government buildings have been and are being put up, residents are still in want. Task Force Bangon Marawi chair and Housing Secretary Eduardo del Rosario said in February 2022 that the rehab program would be “90 to 95 percent” finished by June 30, or when President Rodrigo Duterte’s term ends. The Marawi Compensation Act is still awaiting the President’s signature.

“The marginalized sector, particularly the bakwit, wala siyang pakialam (especially evacuees, Marcos Jr. doesn’t care). What we want is simple. We want to go home. We want to rebuild our own house. Not even a single house has been rebuilt in ground zero. This is what he doesn’t see,” added Abdullah. 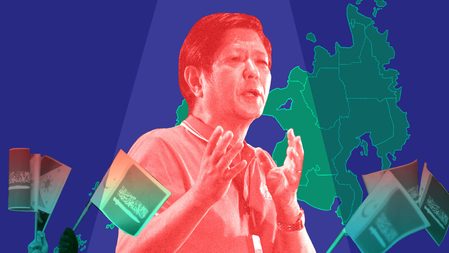 Governor Adiong downplayed concerns, both about the legacy of the elder Marcos and the stance of Marcos Jr. in the creation of the BBL, in explaining why he’s backing the survey front-runner.

“I don’t look at the past anymore. Because if we keep looking at the past, we might not be able to handle the situation before us,” he told reporters.

Tingara-an, herself an educator, said in the process, young Maranaos are learning about both the struggles that Moros before them endured.

Vincent Camar, a 21-year-old volunteer from Kalumbay (Youth) with Leni, was among the many who trooped to the Robredo grand rally. Speaking to Rappler after the Robredo grand rally in Marawi, he talked about Marcos Jr.’s “neglect” of what would be the Bangsamoro Autonomous Region in Muslim Mindanao, the continuing denial of the Jabidah Massacre, and the human rights abuses under Marcos, the father.

(I don’t know why they haven’t awoken to the truth that we were the victims of Martial Law. Why would we vote for the dictator’s son? So I’m really, really disappointed that our governor is supporting the son of the dictator.)

The future of the BARMM

That the incumbent governor, an Adiong, endorsed Marcos Jr. can be both surprising and expected, depending on who you ask.

In the Philippines, politics can be painfully transactional. Local politicians find themselves with little to nothing, should a presidential candidate they did not support win. Those familiar with the dynamics among the executive, Congress, and local governments – themselves having experienced a surprise budget depletion – know this all too well.

So it makes sense for incumbents in Lanao del Sur, a province in one of the most impoverished regions in the Philippines, to support a candidate who’s leading by a mile in preference polls.

But then there’s also the matter of history.

The governor’s grandfather, Domocao Alonto, was a prominent member of the opposition during the Marcos years. Their family had been on the receiving end of political harassment during that time, recalled Zia Alonto Adiong, the government’s brother, in a 2016 Inquirer interview. The younger Adiong is part of the Team Adiong slate and is running to represent the province’s 1st District in the House of Representatives.

Lucman called for then-president Marcos’ impeachment in 1968 because of the Jabidah Massacre. The Marcos government denied it ever happened and the same lie persists today.

Lucman himself would lead the Bangsa Moro Liberation Organization, which eventually joined forces with the Moro National Liberation Front (MNLF).

Team Adiong’s choice of Marcos Jr. can also be explained by his preference numbers In the latest surveys – a snapshot of voter sentiment. According to a Pulse Asia survey taken in mid-March, it’s Marcos Jr. who dominates BARMM, with 47% of those polled saying they’d vote for him.

Manila Mayor Isko Moreno placed second with 26% choosing him, while Robredo trailed at fourth with just 9%. Senator Manny Pacquiao was the third top choice in the BARMM with 11% preference.

Holding on to memory

Abdullah said that sometimes, he loses sleep. He thinks about the men and women before him – his ancestors and the many thousands of Moros who fought against the Marcos dictatorship and those who continued to fight for self-rule.

He worries about what would become of the BARMM under Marcos Jr.

(That’s one huge gain of peace negotiations. The hard work we’ve put in for years, the recent years, will that just go away, disappear, and lose its meaning?)

The acknowledgment of past sins is a huge part of the transition to BARMM. The promise, after all, is the overhaul of a system that has always left Muslim Mindanao at a disadvantage.

He looks to the youth and worries about them as well. “Malaki ‘yong gaps, malaki ’yong kulang. Malaki ’yong dapat gawin (There are a lot of gaps and shortcomings in the way we teach. We have a long way to go),” he said.

The history professor proposes a class on the “essential truths during Martial Law” and for memorialization efforts to extend to sermons in mosques.

“Among the most hurt during the times of Marcos Sr. was the Bangsamoro. If we allow this to happen – historical revisionism, historical negation, it’s like we’re saying that all the efforts of the Bangsamoro for the last many decades have not been true,” he added.

Camar sees campaigning for the Vice President as him vouching for her leadership and holding on to the memories of the men and women before him.

Sporting a pink shirt and surrounded by his friends, Camar was part of a group that cheered and proudly held banners, one of them reminding fellow Maranaos of their maratabat or their dignity.

(If I keep thinking about incentives or rewards, then I would have wanted to be paid for what I’m doing. But I keep thinking that this is for the country. It shouldn’t be about being selfish. I shouldn’t be the only one to benefit. The whole country should.) – Rappler.com