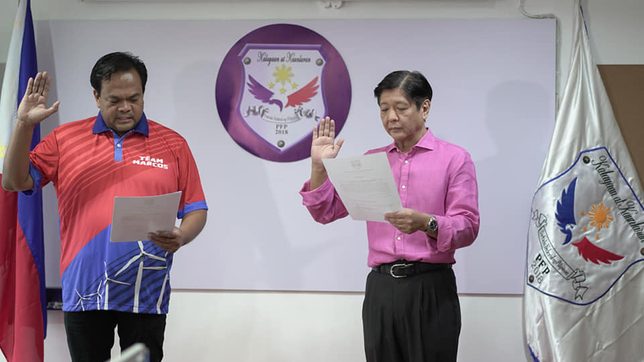 TO HIS DEFENSE. Partido Federal ng Pilipinas president Reynaldo Tamayo, seen here administering the oath of Bongbong Marcos as party member and chairman, is among the PFP officials who filed an answer in intervention to the defense of their standard bearer.

Partido Federal ng Pilipinas (PFP), which is carrying the presidential bid of Ferdinand “Bongbong” Marcos Jr, has filed an answer-in-intervention in defense of its candidate at the Commission on Elections (Comelec).

PFP officials – Reynaldo Tamayo (president), Vic Rodriguez (executive vice president and Marcos’ spokesperson), and Thompson Lantion (secretary general) – filed on November 22 the answer, which the Comelec must accept first. Marcos’ official answer to the petition to cancel his certificate of candidacy (COC) was filed on his behalf by his lawyer, Estelito Mendoza.

In their answer, PFP said Marcos has already settled his tax fines in 2001.

The Court of Appeals (CA) in 1997 upheld Marcos’ conviction of failure to file income tax returns (ITR) from 1982 to 1985, and ordered him to pay a total P36,000 plus interest and surcharge. This conviction is the basis of the pending petition to cancel his COC, filed by civic leaders represented by former Supreme Court spokesperson Ted Te.

Marcos was going to appeal the CA ruling in the Supreme Court in 2001 but withdrew it.

“He opted to just pay the fine plus interest and surcharges which amounted to P67,137.27. Thus the CA decision became final and executory on August 31, 2001. BBM paid the fine on December 27, 2001,” said PFP’s 33-page-answer, far longer than Marcos’ own answer which ran just five pages.

His ineligibility, the petition argues, roots from his 1997 conviction. The petition says that because the tax code imposes perpetual disqualification on any kind of tax convict, Marcos had been perpetually disqualified from holding public office.

One of PFP’s defense was that the perpetual disqualification clause was only inserted to the tax code via Presidential Decree 1994 which took effect January 1, 1986.

His conviction covers 1982-1985 taxable years when he was vice governor then governor of Ilocos Norte.

“It is clear for the taxable years 1982 to 1984, BBM failed to file his income tax returns before the effectivity of PD 1994. Therefore the penalty of perpetual disqualification which was introduced by PD 1994 cannot be applied to BBM’s failure to file his tax returns for taxable years 1982 to 1984,” said PFP, citing the principle that criminal laws cannot be applied retroactively.

PFP said that Marcos was due to file his 1985 ITR in April 1986. But by that time, PFP said, Marcos was no longer public official having just been kicked out of the country by a people power revolution.

This case is pending before the Comelec Second Division, which had upheld its decision to extend the deadline for Marcos and Mendoza to file their answer.

The petitioners had asked Comelec to investigate Rodriguez’s advanced information of the extension grant, but the latest resolution was silent on that request.

The petitioners also claimed the decision to pause the resolution pending the incidents was made by the division “unilaterally without any motion from the parties and despite vehement objections by the petitioners.

“The deferment is indefinite as no period was given by Comelec to decide. Petitioners take exception to the indefinite deferral and the supposed reasons therefor and will avail of appropriate remedies to put on record their objections thereto,” said Te in an earlier statement.

The petition for disqualification filed by Martial Law victims, also represented by Calleja, is at the First Division. Calleja refiled the petition to request only the disqualification of Marcos, instead of the original petition where a cancelation of COC was also requested.