MANILA, Philippines – An unfazed Vice President Leni Robredo said on Monday, March 14, that the group who painted over a mural by her supporters in Las Piñas should have already “learned their lesson” knowing that these types of acts only further “ignite” support for her presidential candidacy.

In a press briefing on Monday, Robredo responded to a report on Sunday, March 13, about a group of unknown individuals who painted over an unfinished mural by volunteer groups Youth for Leni-Las Piñeros and Las Piñeros for Leni – one of the latest in a number of incidents targeting campaign paraphernalia.

(Because this is what happened in Echague… This is what ignites the fire in the hearts of people – those who used to be neutral and silent, because of these incidents, begin to fight.) 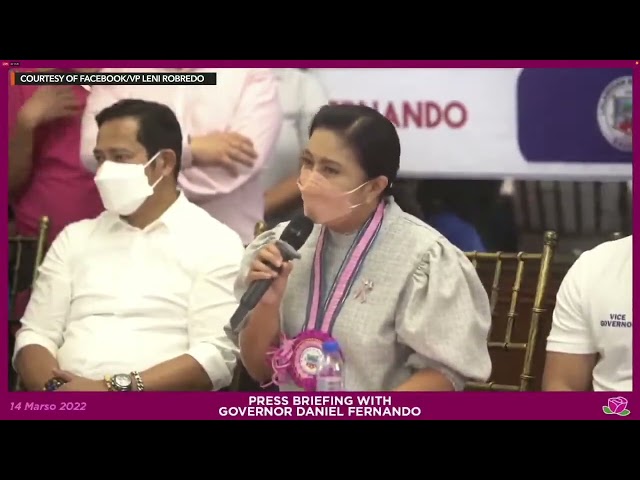 On February 17, the Isabela Para Kay Leni-Kiko Facebook page on shared photos and videos showing Commission on Elections (Comelec) personnel using white paint to cover the mural that members of the Echague for Leni-Kiko volunteer group had made to promote the tandem in their town. This was part of the Comelec’s controversial “Oplan Baklas.”

The Supreme Court issued a temporary restraining order on March 8 to stop Oplan Baklas after Robredo supporters filed a case questioning its constitutionality.

“The more na nilalagyan ng mga balakid, the more na nati-trigger ‘yung mga tao…. Bakit nila papatulan ‘yung simpleng kontribusyon ng mga kabataan na makapag-ambag sa kampanya na private property naman?” she said. (The more they put obstructions, the more triggered people get… Why would they push back against a simple contribution of the youth to the campaign which was done on private property?)

“Nakalulungkot isipin na may mga tao at kampo na hindi gumagalang sa karapatan sa pribadong pagmamay-ari, karapatan sa malayang pamamahayag, at sa batas pang-eleksyon,” said Las Piñeros for Leni. (It is saddening that there are people and camps who do not respect the rights of private property owners, freedom of expression, and election laws.)