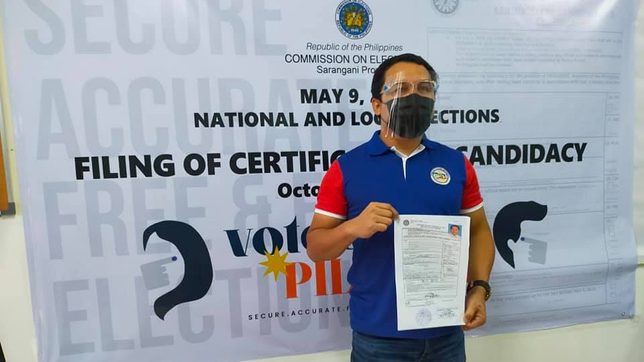 Deputy Speaker and Sarangani Representative Rogelio Pacquiao submitted his COC to the Commission on Elections office in Alabel town, Sarangani.

Pacquiao is running under the People’s Champ Movement (PCM) founded by his senator-brother, who also filed his COC for president on the same day.

The younger Pacquiao has already served as Sarangani congressman for two consecutive terms. The position was held by his brother Manny before his election to the Senate in 2016.

He filed his COC with some fanfare, accompanied by relatives and supporters.

Pacquiao leads the PCM’s ticket in Sarangani that is also fielding the vice governor, Elmer Peralta, as his running mate.

Governor Steve Solon, who is serving his third and final office term, is seeking to succeed Pacquiao in the province’s lone congressional district. – Rappler.com

LIST: Who is running in Sarangani in the 2022 Philippine elections?