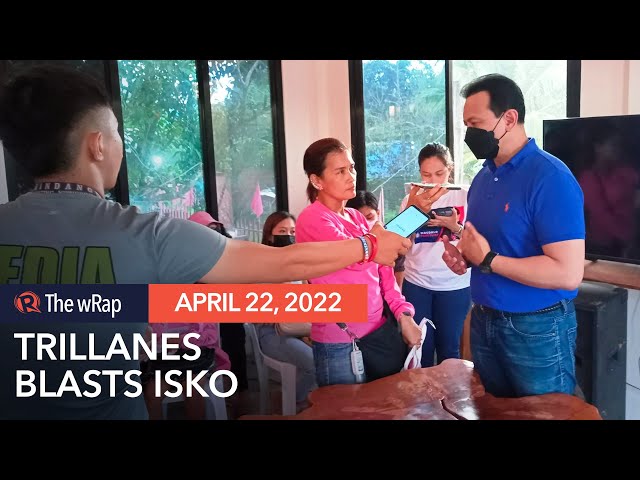 Trillanes weighed in on Moreno’s Easter Sunday tirades against Vice President Leni Robredo and call for his rival to withdraw from the presidential race during the former senator’s campaign sortie in Zamboanga Sibugay.

“The attack was a campaign meltdown as Isko (Moreno) was trying to be relevant,” said Trillanes, a candidate for senator under the Leni Robredo-Kiko Pangilinan ticket.

Moreno called for the withdrawal of Robredo from the presidential race during a press conference he and presidential candidates Senator Panfilo “Ping” Lacson and former national security adviser Norberto Gonzales called to announce that they would pursue their respective presidential bids.

The three presidential candidates said there were attempts by the Robredo camp to talk them into withdrawing from the presidential race, something they all rejected.

In a separate interview, Moreno called Robredo “the godmother of bullies” for supposedly pressuring him into withdrawing from the presidential race.

Trillanes said Moreno has already become “irrelevant” given that he has remained a survey laggard with over two weeks left before the May 9 elections.

It was ironic, he said – for someone who took offense for supposedly being asked to withdraw from the race, and who saw that as bullying – to be calling on Robredo to yield in his favor.

The latest survey results released by Pulse Asia had Moreno as a poor third, behind by two digits from survey front-runner former senator and the late dictator’s son Ferdinand “Bongbong” Marcos Jr.

Robredo ranked second, but despite her seeing a significant increase in support among the youngest and oldest voters, it’s still foreseeably an uphill battle for her, given Marcos’ survey dominance across all age groups except for the most senior of voters (65 and older).

Trillanes, one of the staunchest critics of President Rodrigo Duterte, was in Ipil, the capital town of Zamboanga Sibugay, as part of his campaign sortie in the Zamboanga Peninsula region.

Trillanes also touched base in Pagadian and Dipolog cities before he campaigned in Ipil town where he was given a warm welcome. – Rappler.com