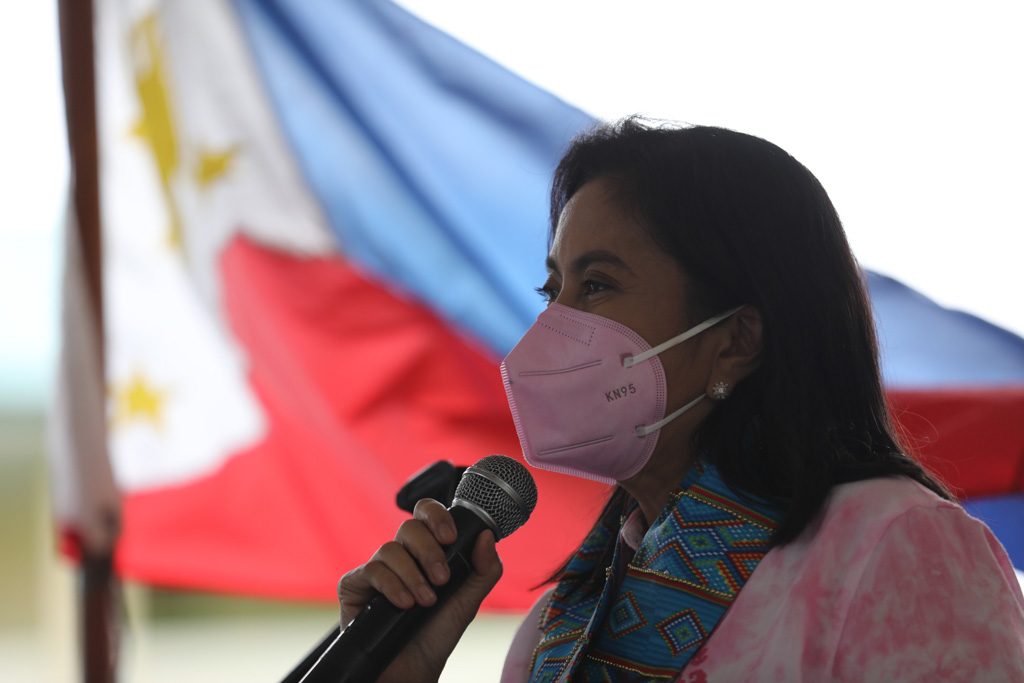 MANILA, Philippines – A total of 76 female local government leaders from across the country threw their support behind Vice President Leni Robredo, women’s rights champion and the only female aspirant in the heated 2022 presidential race.

Calling themselves the Pinunong Pinay Power (PPP), the women politicians came together in a virtual gathering on Wednesday, February 2, and praised Robredo for showing how leaders can perform their duties with “integrity, efficiency, and compassion.”

“VP Leni is a true servant-leader. Her long history in development work as a public interest lawyer is a testament to her motivation to serve. We will not forget that in her years of public service, not once was she tainted by any allegation of corruption,” said the women leaders.

“VP Leni is the incorruptible leader we need,” they added.

Robredo, the highest ranking female government official in the country, has long been a champion for women’s empowerment. She is the polar opposite of President Rodrigo Duterte, who has gained notoriety for his bloody war on drugs and his misogynistic remarks.

Robredo herself has had to endure multiple sexist insults from Duterte, who has repeatedly belittled her capability to lead just because she is a woman.

Duterte would often insult Robredo amid her track record of spearheading programs for marginalized sectors before and during the coronavirus crisis, even without a government position.

Robredo remained undeterred by Duterte’s aggression, as she continued to be a staunch critic of his abusive policies and tragic mismanagement of the pandemic.

A vote for Robredo is described as a vote against Duterte. She was a human rights lawyer known for her firm yet compassionate leadership.

In their statement, the women leaders cited Robredo’s experiences as a development worker and public interest lawyer who focused on representing marginalized sectors in court.

Before she joined politics in 2013, Robredo spent her years as an alternative lawyer helping farmers and indigent Filipinos as a member of the Sentro ng Alternatibong Lingap Pang Legal’s chapter in her home city of Naga in Camarines Sur.

Robredo also founded the Lakas ng Kababaihan ng Naga, was the past president of the Naga City Council for Women, and a member of Federacion Internacional de Abogados. She also worked with the Public Attorney’s Office.

She was later thrust into politics when the plane of her late husband, longtime Naga City mayor turned interior and local government chief Jesse Robredo, crashed off the coast of Masbate in August 2012.

In 2013, Robredo slayed the well-entrenched Villafuerte clan in Camarines Sur when she defeated matriarch Nelly Villafuerte in the 3rd District congressional race. And in 2016, Robredo staged a come-from-behind victory against five other male incumbent senators to become Vice President.

For the 76 women leaders backing Robredo, her “compassionate governance” is precisely what makes her qualified to be the next Philippine president.

“Her compassionate governance is a departure from traditional patronage politics – hers is a brand of politics that puts people’s welfare front and center. We will not forget that VP Leni has consistently fought for women, children, and the marginalized,” said the women leaders.

Their endorsement came just a day after respected public servants who served under institutions traditionally known to be silent and apolitical – the military and the foreign service – also came out to endorse Robredo for president.

Read the full list of the PPP’s statement of support for Robredo below: