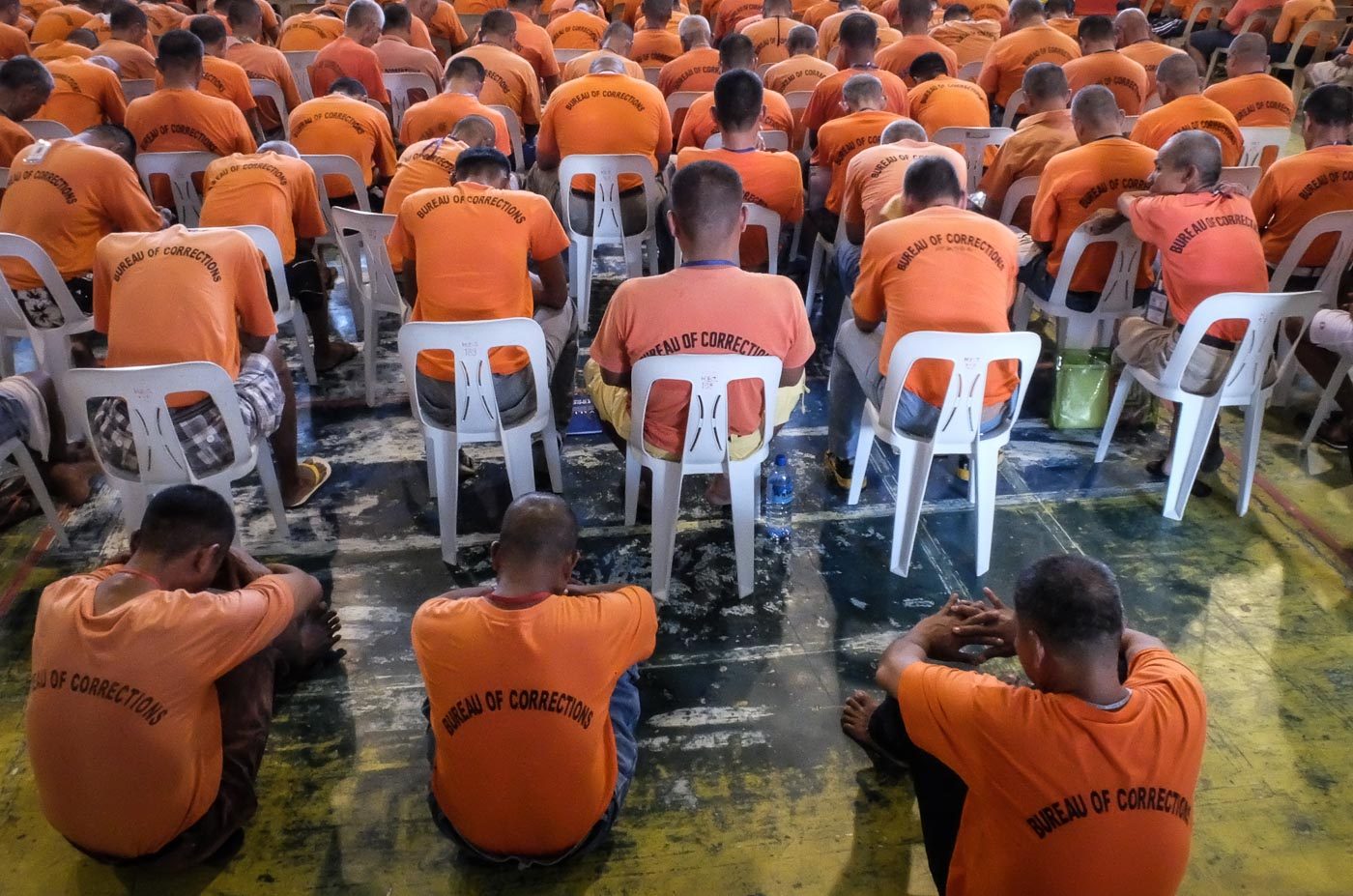 CONVICTS. Inside the New Bilibid Prison in Muntinlupa City on October 28, 2016.

Facebook Twitter Copy URL
Copied
The revised manual, which now also provides for losing GCTA points for months to years because of misbehavior, will be applied by a bureau with a massive problem in record-keeping

The revised manual of the controversial Good Conduct Time Allowance (GCTA) will give select heinous crime convicts a chance to still avail of early release benefits, making the law accessible to more prisoners but a lot more laborious for the Bureau of Corrections (BuCor) to implement.

The 2019 revised manual of the Department of Justice (DOJ) and the Department of the Interior and Local Government (DILG) was completed only in late 2020. It defined a category of heinous crime convicts who could still avail of GCTA if a judge expressly says the sentence was reclusion perpetua or life imprisonment and not death.

The GCTA was revised to exclude heinous crime convicts – the government’s response to the public outrage on the aborted release of convicted rapist and murderer Antonio Sanchez. It is being questioned in the Supreme Court for violation of equal protection.

In the manual recently obtained by Rappler, there are 31 heinous crimes – including murder, plunder, and some types of rape – which fall under Category 2.

If one is charged with a Category 2 crime, he or she cannot avail of Credit of Preventive Imprisonment (CPI) and GCTA from the time of arrest all the way to conviction – meaning the period detained while on trial.

If the judge’s sentence is reclusion perpetua/life imprisonment in lieu of death, the convict likewise would not be able to avail of CPI or GCTA.

“However, when said Person Deprived of Liberty (PDL) is convicted and the appropriate penalty imposed is reclusion perpetua/life imprisonment and not death, the PDL shall be entitled to CPI and Time Allowances from the date of conviction,” says the manual (page 26 in the document).

The government bases its definition of a heinous crime on the crimes listed in the now-repealed death penalty law.

According to the manual, if an appellate court modified the verdict to a lesser penalty, the convict would still be able to avail of CPI and GCTA from the time of conviction.

Category 1 are “crimes which are mandatorily punishable by death, regardless if the Court has expressly imposed reclusion perpetua or life imprisonment in lieu of the death penalty due to the prohibition on the imposition of the death penalty,” the manual says (page 9 in the document).

A system of losing points

One of the criticisms against the GCTA system was that it did not do enough to encourage sustained good behavior. GCTA is awarded per month.

If the convict commits an offense inside prison, he only loses points for the month, leading to an absurd situation where a convict can kill many people in a month and only lose points for that particular month. The revised manual addresses this, but still provides no ground for perpetual disqualification.

“The imposition of the penalty for multiple violation of prison/jail rules and regulations shall result [in] non-entitlement of the PDL to GCTA corresponding to the total number of months of the penalties imposed by the prison/jail authority,” the manual says. (PODCAST: Law of Duterte Land: GCTA’s thorn – Do bad men deserve good things?)

The revised manual results in a more laborious system for the Bureau of Corrections (BuCor) to implement.

BuCor has been hit for massive problems in record-keeping. The same bureau, which falsely attributed a crime to a high-profile convict like Janet Napoles, is the same bureau that will compute all these.

Justice Undersecretary for Corrections Deo Marco told Rappler that the BuCor has started applying the revised manual, and that the bureau started in September 2020 to review prison records and send the documents to Director General Gerald Bantag for approval.

But Marco said there was no concrete data available now as to how many convicts have been granted GCTA under this revised manual, and if convicts have actually been released.

Justice Secretary Menardo Guevarra told Rappler, “We have not been made aware of any problem since then and many PDLs have been processed and released under the new implementing rules.”

But there is at least one GCTA grantee in Naga who has not been released yet, despite being granted the credits back in March 2020.

Rappler obtained a December 7, 2020, order from Naga Judge Soliman Santos calling on the DOJ to release the manual, saying that releases had been put on hold because of it. The order specifically involved a young prisoner convicted of rape by sexual assault, but granted early release on GCTA by the judge back in March 2020. That prisoner still has not been freed.

“We thus again implore the aid of the Honorable Justice Secretary’s providence for the soonest release signature/s for the GCTA manual, so that the processing, computing and application of GCTA by the jail wardens can resume, so that many qualified PDLs might be released and be home for Christmas,” said the order by Naga Judge Soliman Santos.

Rappler learned that the Naga prisoner has not been released as of Saturday, January 9, 2021.

Prisoners who were charged with a heinous crime but convicted of a lesser offense have also had their GCTAs put on hold. (READ: With GCTA suspended, low-risk convicts stranded in BJMP facilities)

The completion of this manual also took time. The GCTA granted to convicted killer US soldier Joseph Scott Pemberton – before he was pardoned – put the pressure back on, such that the DOJ announced mid- September 2020 that it had finally finished the manual meant for 2019.