RETURN HOME. Fishermen pulls the F/B Gem-Ver, the Filipino boat sunken by a Chinese vessel near Reed Bank, towards the shore of Brgy. San Roque I, San Jose, Occidental Mindoro on June 15, 2019.

Facebook Twitter Copy URL
Copied
The 22 fishermen of Philippine fishing boat Gem-Ver, including its owners, will be compensated nearly 3 years after their ship was rammed and abandoned by a Chinese vessel in the West Philippine Sea 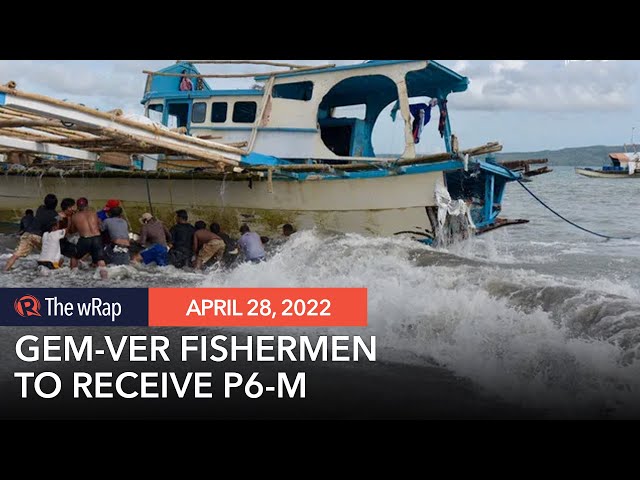 MANILA, Philippines – The 22 Filipino fishermen and owners of Philippine fishing boat Gem-Ver will finally receive their long-awaited compensation from the operator of the Chinese vessel that rammed, sunk, and abandoned them in the West Philippine Sea in June 2019.

Justice Secretary Menardo Guevarra confirmed this to Rappler on Thursday, April 28, after negotiations between the two parties were finally concluded, nearly three years since the ordeal nearly cost the Filipino fishermen’s lives.

“The parties have agreed to settle for a P6-million compensation to our fishermen and this settlement is ready for implementation,” Guevarra confirmed.

Gem-Ver’s owner, Felix dela Torre is expected to receive the compensation on behalf of his crew in Manila, Rappler learned. No other details were available at the moment.

Asked for more details, Department of Justice Undersecretary Adrian Sugay told Rappler that the Department of Foreign Affairs will issue an official statement on the matter “in the coming days.”

The agreed amount is much less than the P12-million civil damages estimated by the fishermen and justice department following an assessment done from July to August 2020. The initial amount covered expenses for the repair of the fishing vessel, loss of income, wages for six months, and moral damages.

At the time, Guevarra said the P12 million amount would serve as the “starting point” for discussions between the two sides. The final amount of P6 million, however, is higher than the supposed P3.6 million to P4 million amount proposed at one point during negations – an amount that would cover only the cost of repairs and P2.2 million in loans the Dela Torre family took out for the job.

Dela Torre’s wife, Fhaye, previously told Rappler that additional funds for moral damages would help the group tremendously during the tough pandemic, which held back opportunities for the crew to set out to sea after it completed repairs in November 2019. In December 2019, Gem-Ver suffered more damage after strong waves and wind brought by Typhoon Ursula hit the boat while it was docked.

Since 2019, Gem-Ver’s crew had held out hope that they would receive substantial aid from the Philippine government and compensation from the Chinese. Several fishermen of the boat shared plans to use the funds to repay loans they took to sustain their families during fishing trips or start new business that would keep them on land.

Before the conclusion on talks on compensation, progress on the issue of compensation for Gem-Ver was slow. After the cost of damages was estimated in 2020, it took another year until a round of meetings was held in 2021 to iron out and clarify differences in the legal systems of the two countries, among other issues.

Help for the group likewise came only after several officials, including President Rodrigo Duterte, downplayed and even cast doubt on the account of the Filipino fishermen. (READ: Gem-Ver boat owner to Duterte gov’t: Whose side are you on?)

In a public apology addressed to Foreign Secretary Teodoro Locsin Jr. on August 28, 2019, the owner of the Chinese ship had offered to pay the Filipino fishermen after the incident. The apology – which came on the same day Duterte departed for an official visit to China – was considered a “breakthrough” and had pushed the issue toward the “cusp of closure,” save for the payment of compensation due to group, said the late Philippine Ambassador to China Jose Santiago Sta. Romana in 2019.

The settlement on the issue of compensation was reached just months before the end of Duterte’s term on June 30.

Testing Duterte’s strong ties with Beijing, the sinking of Gem-Ver was one of the biggest crises to hit the administration. It put a spotlight on Duterte’s controversial policy in the West Philippine Sea and was also one of the most heated issues since the 2012 Scarborough Shoal standoff prompted the Philippines to file – and win – its historic case against China.

Since Gem-Ver’s sinking in 2019, the captain of the ship, Junel Insigne and other crew members had drifted apart, while several more crew members had been forced to find other ways to make a living since the coronavirus pandemic hit the Philippines. – Rappler.com