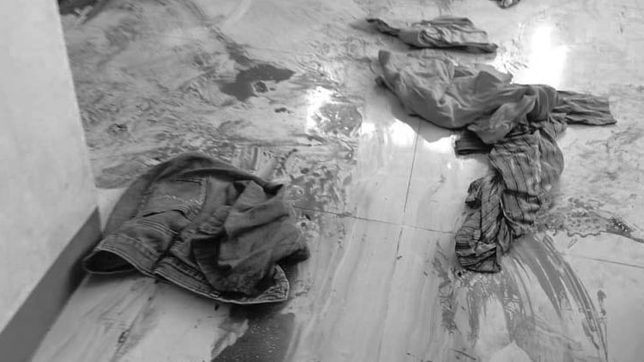 Facebook Twitter Copy URL
Copied
The DOJ AO 35 task force on political killings has had a dismal performance since its creation, and is yet to give an update on the Echanis and Alvarez murders

A “disappointed” Justice Secretary Menardo Guevarra said on Monday, March 8, that he will include the killings of activists in Calabarzon in the Department of Justice of DOJ’s ongoing task force probe into political killings.

“They will fall within the jurisdiction of the AO 35 task force,” Guevarra said, referring to the group’s formal name, Administrative Order 35 Task Force. AO 35 was issued by then-president Benigno “Noynoy” Aquino III.

Guevarra said he was “disappointed” that there were still killings in the police operations in Calabarzon, when he already announced to the United Nations (UN) that the police violated rules in their anti-drug operations that led to deaths of drug suspects.

The police were mostly conducting searches for alleged explosives and guns, but this led to the deaths of at least 9 people, 5 of whom have been identified to be local leaders of activist groups in the region.

“I am quite disappointed kasi nga hindi nabawasan, notwithstanding na sinabi na natin ‘yan before the international body,” said Guevarra, but clarified he was not pre-judging the police.

(I am quite disappointed because these were not avoided, notwithstanding my already saying this before an international body.)

“I was really hoping that with that statement I made before the UN, our law enforcers would be more careful in their operations but these things continue to happen so we really need to sit down with Philippine National Police (PNP), with the Philippine Drug Enforcement Agency (PDEA), and with other law enforcement to make sure na hindi na masyadong mangyayari itong ganito (that these things don’t happen anymore so), it could be avoided,” Guevarra added.

DOJ’s AO 35 task force has had a dismal performance since its creation. Few people have been convicted, and most perpetrators, including state agents, have been cleared.

Even the killings of activists Randall Echanis and Zara Alvarez in early 2020 have not been solved yet. “We’ll take that up in the agenda,” said Guevarra, when asked for an update on the Echanis and Alvarez investigations.

The AO 35 task force was also supposed to come out with a report that would spot patterns, but it has yet to release initial findings.

“You know, the task of the AO 35 group has been made difficult by the absence or reluctance of witnesses to testify. Others have little trust in the task force,” said Guevarra.

What kind of activism?

Answering follow-up questions, Guevarra said the killings in Calabarzon would fall within the jurisdiction of the task force “as long as the kind of ‘activism’ is one contemplated under AO 35.” It has to be related to an advocacy like trade unionism, or indigenous peoples (IP) causes, and the like.

Police suspected the subjects of the massive searches as being either part of, if not linked to, the armed communist New People’s Army (NPA).

“We are not bound by the characterization given by the police. We shall consider other available information,” said Guevarra. The bloody crackdown happened two days after President Rodrigo Duterte exhorted law enforcers in a speech, to “kill them (communist rebels) right away,” once they fight back (nanlaban).

Guevarra and his drug war review panel have also been always vague about whether they would investigate Duterte’s potential liability for encouraging the killings through his rhetoric.

Guevarra’s statement against the police in the drug war was criticized by many human rights groups for being a mere smokescreen to thwart international investigation. Groups noted that the DOJ panel would still wait for the PNP to file the complaints, even though nanlaban cases are supposed to be ripe for prosecution.

Given his disappointment over these new killings, how would Guevarra move on the recommendation to file complaints against erring policemen in the drug war?

“One, we will closely monitor if law enforcement authorities will act on and/or abide by the recommendations of their own internal affairs units,” he said.

“Two, any member agency of the review panel may file the appropriate complaint with the DOJ for the conduct of preliminary investigation. Three, the DOJ will provide assistance and protection to any complaining party or witness,” he added. – Rappler.com