ALLEGED GUNMAN. Joel Escorial, the self-confessed gunman in the slay of radio commentator Percival 'Percy Lapid' Mabasa, is escorted upon his arrival at the Department of Justice in Manila on October 24, 2022, for the preliminary hearing of a complaint filed by the Southern Police District.

(In our conversation on October 16, 2022, around 8 pm, Villamor told me that if the police caught me, I should not say that it was Bantag who had ordered us.)

The affidavit narrated Escorial and Jun Villamor’s transaction. Villamor was the alleged middleman inside the New Bilibid Prison, who died after he was suffocated with a plastic bag. 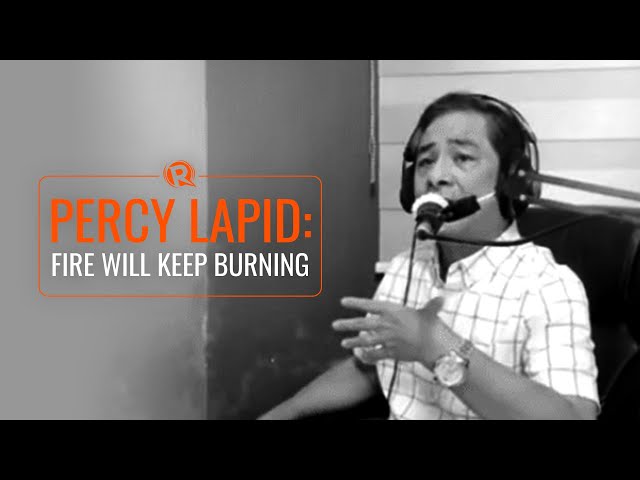 Shortly after Escorial surrendered and confessed to killing Lapid on October 3, Department of Justice Secretary Jesus Crispin “Boying” Remulla said Villamor had died inside the national penitentiary. Other named suspects – a certain “Orly,” and brothers Edmon and Israel Dimaculangan – remain at large.

In explaining why he only made the statement days after he confessed, Escorial cited Villamor’s death.

“Dahil sa nalaman ko na namatay si @Idoy sa loob ng Bilibid, mayroon akong idadagdag patungkol sa minsang nag-usap kaming dalawa bago siya namatay (Because I knew that Idoy died inside Bilibid, I have something to add based on our conversation before he died),” Escorial said in his affidavit.

Idoy is Villamor, according to Escorial. The self-confessed gunman added that Villamor told him to pin the alleged middleman instead because if they confess about Bantag, Villamor would be killed inside Bilibid.

Escorial said this was the reason why he did not initially tag the certain Bantag.

“Subalit dahil patay na po siya (Villamor) ay sasabihin ko na po na talagang sinabi niya sa akin na si BANTAG ang nag-utos sa amin (But because Villamor is already dead, I will now say that he told me that Bantag was the one who had ordered us),” the suspect said.

In an interview with reporters on Friday, Remulla said the Philippine National Police (PNP) and the National Bureau of Investigation (NBI) would disclose the names of people who will face complaints. He added murder complaints would be filed against at least 10 people allegedly involved in the case by November 7.

Veteran journalist Roy Mabasa, Lapid’s brother, told ABS-CBN News that Bureau of Corrections (BuCor) officials are being pinned in the killing of his brother based on the affidavits.

“Nakita namin ‘yan do’n sa testimonies ng mga inmates na nagbigay ng kanilang mga affidavits sa NBI, at lahat sila ay nagtuturo sa certain BuCor officials (We saw that in the testimonies of the inmates who gave their affidavits to the NBI, and all of them are pointing to certain BuCor officials),“ Mabasa told ABS-CBN, reiterating that the information did not come from them. Suspended BuCor chief Gerald Bantag was among the 160 persons of interest in the case, according to authorities. He was sacked by President Ferdinand Marcos Jr., saying it was for an impartial probe.

After his relief, Bantag went on to criticize the Marcos administration, his successor former military chief Gregorio Catapang Jr, and the press briefing where Escorial was presented. The suspended BuCor chief also warned Marcos to be careful with the people he appoints. – Rappler.com