Lawmakers question need for Office of the President’s P4.5-B intel funds amid pandemic 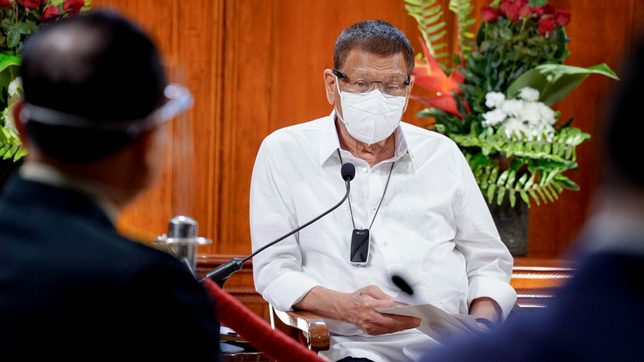 President Rodrigo Roa Duterte discusses matters with State Councilor and Minister of National Defense of the People's Republic of China General Wei Fenghe during a meeting at the Malago Clubhouse in Malacañang on September 11, 2020. KING RODRIGUEZ/PRESIDENTIAL PHOTO

Progressive lawmakers questioned why the Office of the President (OP) is proposing P4.5 billion worth of confidential and intelligence funds even as the Philippines continues to grapple with the coronavirus pandemic.

Kabataan Representative Sarah Elago, a member of the House’s Makabayan bloc, said during the OP’s budget hearing that the multibillion-peso fund could instead be used to buy more COVID-19 test kits and strengthen the country’s public healthcare system.

The congresswoman further noted that intelligence funds are difficult to audit, since line items are not disclosed to the public due to security concerns.

(Is it right for the Office of the President to ask for P12.98 million per day for its black budget, when the money can be used instead to buy millions of PPE and testing kits, strengthen the capacity of our public healthcare system, help workers who lost their jobs, and expand social amelioration programs in the middle of the pandemic?)

He said terrorist activities do not stop even during the COVID-19 crisis, echoing similar statements already made by President Rodrigo Duterte and his other officials.

(It is even more important that we have intel funds because we have proven that even if there is a COVID-19 pandemic, we still had the bombings in Sulu.)

(There are still a lot of terrorists who can take advantage of the crisis caused by COVID-19 to bring down the security of this country. That’s why we need protection even more.)

In August, twin suicide bombings in Jolo, Sulu, killed 14 people and injured 75 others. The military identified the Abu Sayyaf Group as the perpetrator of the explosions.

Bernardo also said the government’s cybersecurity needs to be augmented.

(All transactions now are electronic so the cybersecurity space needs to be strengthened so no syndicate would take advantage of it and try to weaken our system while there is a crisis. There is a greater need to have this kind of security right now.)

The Duterte government said the proposed P4.5-trillion national budget for 2021 had been “recalibrated” to address the effects of COVID-19. (READ: [ANALYSIS] Why you should be alarmed by Duterte’s 2021 budget)

Still, the OP is poised to get P4.5 billion for its confidential and intelligence funds for the next fiscal year, the same amount it received for 2020. This is more than half of the P8.238 billion proposed by Duterte’s office for 2021.

Confidential and intelligence funds are red flags for advocates of government transparency and accountability since the offices that spend them are not required to produce receipts or publicly disclose expenses due to their sensitive nature.

They are considered as lump sum funds as well, since there is no breakdown specifically provided for them under the national budget.

He said there seems to be a redundancy in allotments for intel funds since the OP’s allocations are separate from that of the National Intelligence Coordinating Agency (NICA).

(If the OP has billions of pesos in intelligence funds, isn’t it useless…why do we still have NICA with 800 employees? Isn’t that an unnecessary duplication, Mr Chair?)

Presidential Spokesperson Harry Roque already defended Duterte’s intel funds, saying the Chief Executive can use it for whatever needs that have to be addressed.

Roque also said the President used a portion of his 2020 intel funds for COVID-19-related efforts.

Despite the concerns raised by the Makabayan bloc, the House committee on appropriations still terminated the budget hearing for the OP, which means lawmakers already approved in principle its proposed P8.238-billion budget for 2021. – Rappler.com