Lumad child released to father after standoff with DSWD RELEASED. A Lumad minor is released to father after court ordered DSWD to transfer custody of minor to the parent

After a nearly 24-hour standoff among the Department of Social Welfare and Development (DSWD) Central Visayas, lawyers from the Integrated Bar of the Philippines (IBP) Cebu City, and local police, the Lumad child in the middle of this controversy was finally returned to her parent.

This comes a day after the IBP and conveners of the Save Our School Networks (SOS), failed to convince the DSWD Central Visayas to release the child to the father despite a court order issued on Thursday.

The child had been in the government agency’s custody since the raid of the Lumad school in February. 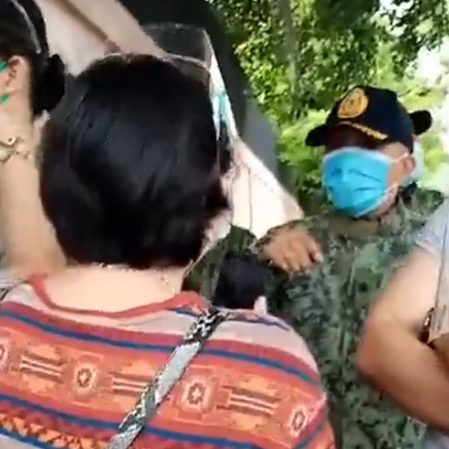 IBP Cebu City submitted a manifestation to the court in the morning of Friday, March 12, to implement a release order issued by Cebu City Regional Trial Court Branch 20.

IBP Cebu City even accused DSWD of calling in police and SWAT Teams in order to bar the Lumad father from attempting to regain custody of his child in the DSWD Cebu Compound on the same day.

“This morning, we filed our manifestation and would have proceeded to file contempt charges against respondents should their contemptuous acts continue,” said IBP Cebu City Chapter.

Prior to this, in a live press conference, IBP Cebu City Chapter president lawyer Regal Oliva said that the only thing DSWD could do was to release the child since it no longer held jurisdiction after the court released its order to them.

According to Oliva, DSWD Central Visayas filed a motion for reconsideration for the said order to the Cebu court but this did not mean that the child should still stay under their custody.

Acting on IBP Cebu City’s manifestation after the DSWD refused to release the child despite the judicial ruling, the court ordered the sheriff to serve the release order and reunite the father and daughter.

According to both the lawyer and representatives of SOS, the father has been met with harassment on multiple occasions, noting that police were present during the father’s visits to DSWD.

“Moreover, police officers were present outside DSWD’s premises and assisted respondents by barring the petitioner from taking custody of the child,” Oliva said.

SOS Cebu spokesperson Megara Lim added that even after the hearing when the father was transported from the court to where he stayed, several motorcycles and a brown SUV tailed their vehicle.

“We condemn this harassment and we demand from DSWD, especially from Rebecca Geamala and Brenda Abilo to release the child from their custody,” Lim said.

“Our chapter always adheres that a child’s best interest is of paramount concern not only among us but in the community as well,” said IBP Cebu City Chapter.

Rappler tried contacting DSWD Central Visayas for their side but has yet to receive any comment as of posting.

The DSWD, however, published a press release stating they “turned over” the minor to her parent without mentioning why they did not release the child on Thursday day despite the court order. – Rappler.com