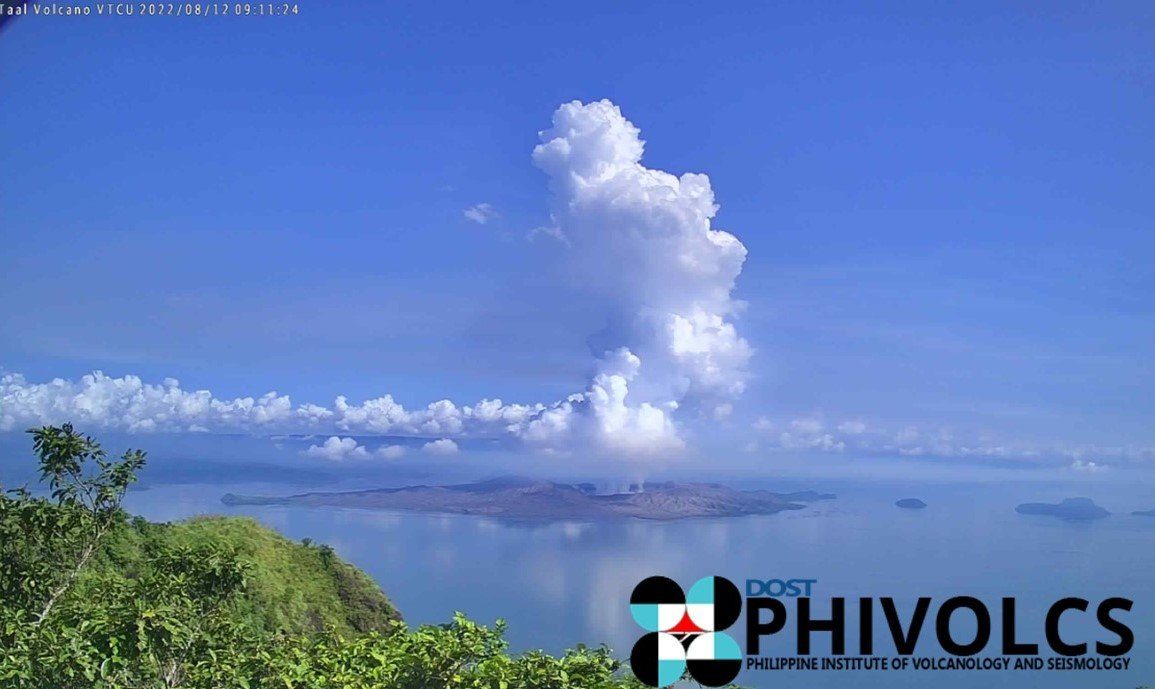 DEGASSING. A steam-rich plume degassed from the Taal main crater is captured by the Phivolcs remote station in Cuenca, Batangas, at 9:11 am on August 12, 2022.

The Philippine Institute of Volcanology and Seismology (Phivolcs) said on Friday, August 12, that a total of 13,572 tons per day of SO2 had been recorded on Thursday.

The high SO2 emission “produced significant volcanic smog or vog” over the Taal Caldera, which thickened between 9 am and 2 pm on Thursday.

Phivolcs added that residents of the following areas in Batangas province reported a “sulfurous stench”:

Vog can irritate the eyes, throat, and respiratory tract. People with respiratory or heart ailments, the elderly, pregnant women, and children may be particularly vulnerable to its effects.

Since July 15, SO2 emission has averaged 7,818 tons per day, much higher than the average of 1,289 tons per day recorded between May and mid-July.

SO2 is a major gas component of magma.

Phivolcs also said degassing has increased since the start of August, as seen in the upwelling of volcanic fluids in the Main Crater Lake and the “voluminous” steam-rich plumes.

Degassing activity in the Taal Main Crater between 9:00AM and 2:00PM yesterday, 11 August 2022, captured by the IP Camera of the remote station VTMC. Upwelling of volcanic fluids and volcanic smog or vog are visibly transpiring during this period. pic.twitter.com/oCdV3hcda5

In addition to vog, acid rain “can be generated during periods of rainfall and volcanic gas emission over areas where the plume disperses,” Phivolcs warned.

The agency said acid rain can damage crops and affect metal roofs of houses and buildings.

There were also 5 shallow volcanic tremors lasting 3 to 8 minutes in the latest observation period.

Taal Volcano has been under Alert Level 1 since July 11.

Under Alert Level 1, these are possible:

If the unrest escalates further, Taal Volcano could be raised back to Alert Level 2. – Rappler.com