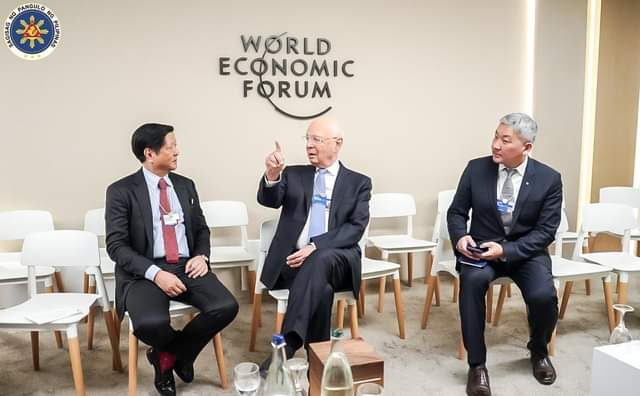 Facebook Twitter Copy URL
Copied
The Philippine president, son and namesake of the late dictator, characterizes their time in exile as 'dark days for the family and I dare say even for the country'

MANILA, Philippines – For President Ferdinand Marcos Jr., joining politics was a way to defend and ensure the survival of his infamous clan.

In a lengthy conversation with World Economic Forum (WEF) President Børge Brende in Davos, Switzerland, Marcos spoke candidly about what drove him to enter politics. “After we came back from the US, after exile, when we were first allowed to come back, the political issue was ‘Marcos,’” he said, referring to their homecoming in 1991.

It was on July 31, 1991 when then-president Cory Aquino – who replaced Marcos’ father and namesake following the 1986 EDSA People Power Revolution – allowed the clan to step foot in the Philippines, in hopes to put former first lady Imelda Marcos on trial for crimes committed during their decades-long “conjugal dictatorship.”

“We were in exile for six years so we weren’t sure if we were coming back at all; physically coming back. My father never made it back. He died in Hawaii. So that was a very trying time – those were dark days for the family and I dare say even for the country,” he said.

So for the family at them, said Marcos, entering politics was about going on the defensive. “For us, to defend ourselves politically, someone had to enter politics and be in the political arena so that at least… not only the legacy of my father, but even our own survival required that somebody go into politics,” he explained.

A little over a year after their return to the Philippines, Marcos ran and won as congressman of their home province of Ilocos Norte. When his father was president, Marcos served as vice governor and later governor of Ilocos Norte.

Much more has changed since their return from exile. Through the decades, the President’s paternal and maternal clans expanded their political power. Two of his close relatives hold top elected posts – sister Imee is a senator while cousin Martin Romualdez is House speaker. His son, newbie congressman Ferdinand Alexander, represents the 1st District of Ilocos Norte and deemed as a “senior” House leader. The Marcoses and their relatives or close allies continue to dominate Ilocos Norte politics.

In May 2022, Marcos won as the first majority-elected president since the post-People Power era, in an election remembered for the spread of disinformation online.

“If you were to ask me when I was 23, 24, 25 years old, ‘Will you enter the politics?’ Before you finish asking the question, I’ve already said no, no, no, no. But you know, life takes you to certain…places that you did not expect. And so once I was entrenched in the political arena, I said, well – if we’re going to do this, you better do it well,” Marcos told Brende. (Based on his official resumé, Marcos first served as Ilocos Norte governor in 1981, at the age of 23. He became a member of his father’s political party, Kilusang Bagong Lipunan, in 1980.)

In 2022, Marcos ran on a platform of “unity” without presenting any concrete vision. His 2022 coalition was formidable from the onset: he ran alongside Sara Duterte, the daughter of the popular and controversial outgoing president then, Rodrigo Duterte.

While his was a campaign promise of continuity, Marcos sought to take a calmer, less bombastic approach than his predecessor. He’s taken a much friendlier stance towards long-time ally the United States, while speaking of a “golden age” in the Philippines’ relations with China.

Marcos is in Davos, Switzerland, until January 20 to attend the WEF. This is his 8th trip outside the Philippines to date, and his third in 2023 alone. He is headed to Japan in February, for his next state visit. – Rappler.com