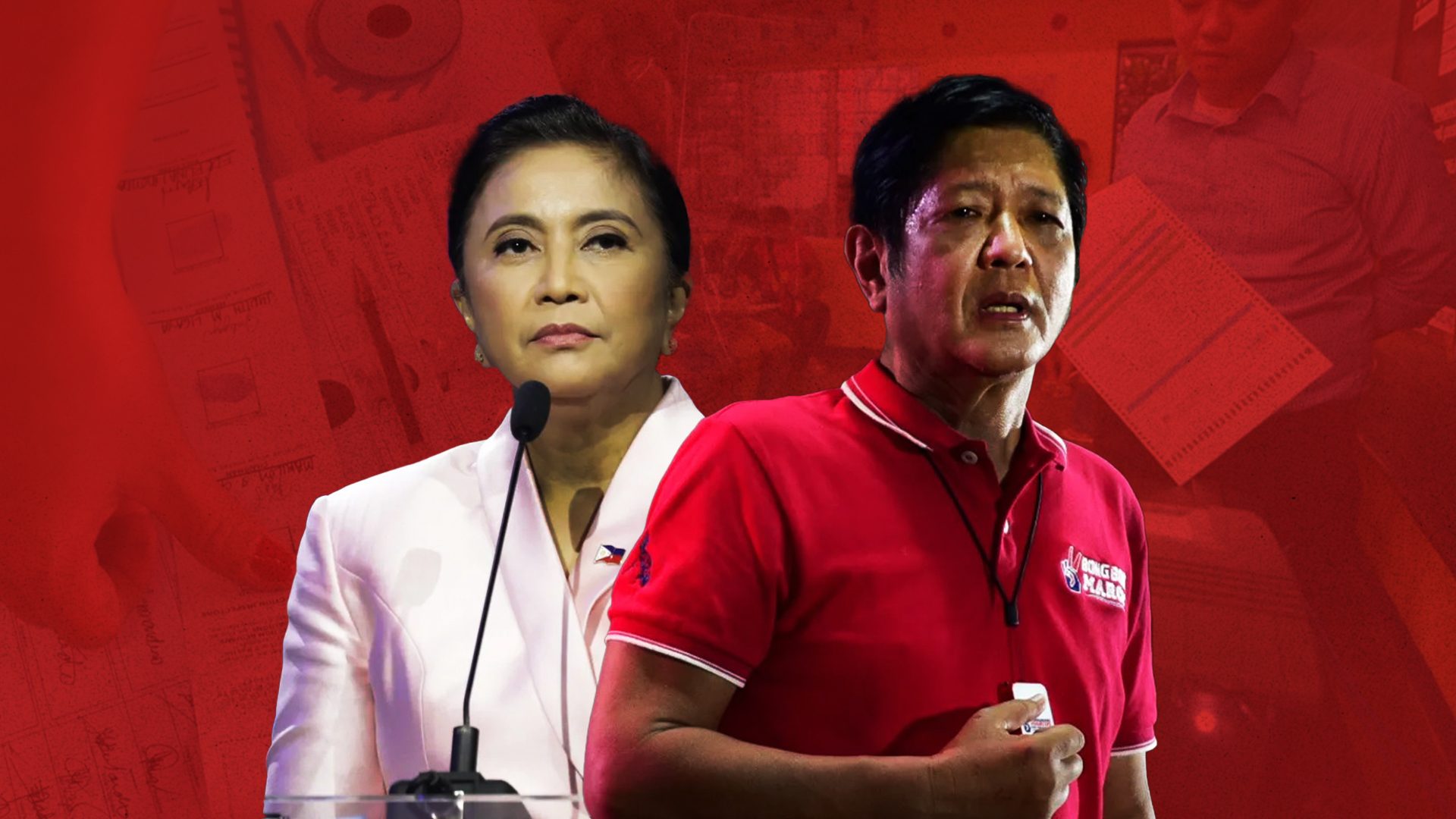 Facebook Twitter Copy URL
Copied
Supporters of Ferdinand ‘Bongbong’ Marcos Jr. have long been sowing distrust in the election process – since his defeat in 2016

MANILA, Philippines – Clad in a traditional barong Tagalog, survey frontrunner Ferdinand “Bongbong” Marcos Jr. addressed supporters of his presidential bid in a Facebook video posted Tuesday, May 3, barely a week before the May 9 vote.

(This May 9, we need to be vigilant of our votes. Let’s protect our personal decisions and let’s not allow this election to be stolen from us again.)

He alluded to his baseless claim that his 2016 rival, Leni Robredo, had “stolen” the vice presidency from him. After Robredo won by just 263,473 votes, Marcos filed an electoral protest against her on the eve of her oath-taking. When votes were recounted in three pilot provinces chosen by Marcos, Robredo’s national lead even widened to 278,566 votes. The Supreme Court unanimously junked the protest in 2021. (TIMELINE: Marcos-Robredo election case)

It’s a return match for Marcos and Robredo in 2022; they are now the leading candidates for president.

While Robredo is far behind Marcos in pre-election surveys, the groundbreaking volunteer movement behind her hopes that their nationwide efforts will translate to votes on May 9, and make her win.

But how will the Marcos camp deal with that, if ever? Likely not sitting down, if one were to gauge the narratives that the Marcos networks have been seeding online.

Rappler scanned public Facebook posts from January 1, 2022 to May 5, 2022 that talked about possible election fraud, and using network community clustering, found two significant groups of accounts and pages participating in the discussion – the bases of the top two presidential candidates. (READ: On social media, it’s a two-way presidential race between Marcos, Robredo)

The striking difference, however, is that the Marcos network aimed to sow distrust in the country’s electoral and democratic processes, while the Robredo network pushed back against many false claims about the elections, some of which were amplified by Marcos Jr. himself.

Here’s what the data showed.

On January 10, Manila Bulletin ran a story that claimed a group of hackers breached Comelec servers and downloaded sensitive data “that could possibly affect the May 2022 elections.” This was reminiscent of the massive “Comeleak” scandal in 2016, where a group of hackers publicly posted the poll body’s database online.

After the story was published, pro-Marcos users shared YouTube videos packaged to look like alternative news reports, warning voters of possible electoral fraud. One of the most active users was JS Veluz TV, who has publicly supported the UniTeam and its allies.

Two days after Manila Bulletin published the story, Comelec denied they were hacked and refuted the claim, highlighting different loopholes in the report. Marcos supporters also questioned some of Comelec’s major decisions by spreading misleading if not false information about them.

When the poll body entered into a partnership with Rappler for a series of projects ahead of the elections, pro-Marcos netizens spread false claims about the deal. Videos falsely claimed that Rappler would have access to confidential data, or that the deal would allow opposition candidates to win the election. (FACT CHECK: Mga kasinungalingan tungkol sa Rappler-Comelec partnership)

Comelec asserted its independence, and said Rappler was “not getting special information that would not be available to any other media networks.” Yet Solicitor General Jose Calida brought both parties to the Supreme Court, as he asked the justices to stop the partnership. The Court ultimately did not decide on Calida’s case. Comelec, meanwhile, suspended the deal in deference, they said, to the Court.

Social media users also raised alarm over claims involving an alleged Smartmatic breach in March. Smartmatic has been the country’s major automated election provider since 2010, and has also been linked to false claims about Robredo winning the vice presidential race in 2016 due to alleged electoral cheating. Marcos Jr. himself had accused Robredo of conspiring with Comelec and Smartmatic.

For the 2022 elections, the voting machine company bagged five contracts with Comelec, amounting to a total of over P3 billion.

Senate electoral reforms panel chairperson Senator Imee Marcos, sister of the presidential candidate, and Senate President Vicente Sotto III, who is running for vice president, have said that Smartmatic’s system was compromised, a conclusion they supposedly reached during a closed-door session attended by top poll officials.

Imee Marcos had also cited the Facebook page XSOS Group, which posted screenshots and videos alleging electoral fraud by Smartmatic and Comelec. The Facebook page later became inaccessible in March, and hackers tied to the group were also arrested in April.

Both Comelec and Smartmatic have denied the allegations, but pro-Marcos users amplified the false claim on Facebook, often using the word “Smartmagic,” and claiming that Robredo would benefit from the supposed electoral fraud.

Senator Marcos has also been pushing for a shift to hybrid elections, which combines the old manual election system and the current automated election system. She believes the hybrid setup would foster trust in the electoral process.

“The issue [here is] transparency, because our voters – I suspect for understandable reasons because our tech is so faulty – do not trust the machines, and will prefer their own teachers counting the votes physically,” she said.

Marcos supporters lauded this move and urged other Filipinos to support calls to shift to hybrid elections. Some users even taunted members of the opposition, saying their supposed plans to rig the elections were over.

Despite Marcos Jr.’s stellar survey ratings and massive machinery, Robredo and her supporters are pushing back against his allegations of electoral fraud. A common quip among her supporters is that Robredo couldn’t have cheated in 2016, because she had beaten Marcos thrice – during the actual election, the recount, and the Supreme Court dismissal of his electoral protest.

Rappler’s scan found that the Robredo network shared posts from media outlets and fact-checking organizations that have also debunked claims that the election was stolen from Marcos Jr. in 2016.

But “kakampinks” have also been wary of the Comelec in the lead-up to the 2022 election.

When the poll body’s “Oplan Baklas” took down campaign materials of Robredo and running mate Senator Kiko Pangilinan on private property, their supporters raised concerns that Comelec would later rig the election in favor of other candidates.

They pointed out that Comelec entered into a half-billion-peso deal with F2 Logistics, a company with ties to President Rodrigo Duterte’s 2016 campaign donors, and that the remaining Comelec officials are all Duterte appointees. The Comelec building’s facade had also briefly lit up in red and green – the UniTeam campaign colors – and the decision to junk disqualification cases against Marcos Jr. came after Rowena Guanzon, who voted to disqualify him, retired as commissioner. (Rappler Talk: Rowena Guanzon on Marcos cases and her 7 years in Comelec)

When overseas voting kicked off in April, Robredo supporters would also share reports about overseas voters receiving pre-shaded ballots. Philippine embassies and consulate generals in other countries addressed these in various ways: some admitted they accidentally handed a spoiled ballot and that it was an isolated case, while others denied such claims.

Apart from being critical of Comelec in varying degrees, another thing Marcos and Robredo supporters had in common was a call against candidates engaged in alleged vote-buying prior to election day.

Data showed that posts from both supporter networks spiked on Tuesday, April 26.

On this day, both pro-Marcos and pro-Robredo users shared live videos from reelectionist Mayor Jo Castañeda of Mariveles, Bataan, who accused her opponent Ace Jello Concepcion of vote-buying. One pro-Marcos user said, without basis, “Mukhang lugaw (Robredo) na naman ang nasa likod nito.” (It looks like Robredo is behind this again.)

Prior to April, Robredo supporters also specifically hit brothers Cavite 7th District Representative Jesus Crispin “Boying” Remulla and Cavite Governor Jonvic Remulla. Boying Remulla had claimed that some attendees of a Robredo campaign rally in Cavite were paid, and had even gone as far as to red-tag some supporters. Pro-Robredo users had reshared old posts about Jonvic’s supporters who were caught vote-buying back in 2019 for the governor’s reelection campaign, with some using the hashtag #BoyingSinungaling.

In the lead-up to the 2022 elections, Jonvic Remulla also handed out cold thousand peso bills to some attendees of a Uniteam rally in Dasmariñas, Cavite. He defended this move by saying he handed out cash when no one from the UniTeam ticket was on stage.

There was another incident of possible vote-buying at a Uniteam rally where envelopes containing P500 were being distributed to attendees in Nueva Ecija in March. Nueva Ecija Governor Aurelio Umali had said it was an ayuda (financial aid) distribution that had long been scheduled.

Comelec said they would wait for a “proper complaint” to be filed before they probe the incident, but announced later in the month that they planned to form an interagency task force focused on combating vote-buying. However, it did not sit well with Robredo’s supporters that the task force was going to be headed by Commissioner Aimee Ferolino, who voted to junk Marcos Jr.’s disqualification cases. (‘Atrocious logic’: Guanzon hits Comelec nemesis Ferolino over Marcos ruling)

Ahead of a high-stakes election, disinformation becomes a matter of national security.

In a webinar on the impact of data and social media on the voting public’s opinion, economist and political analyst Andrew Marasigan highlighted the need to establish protocols for disinformation that can escalate into real-world consequences.

“I think the problem [of disinformation and weaponizing the internet] has escalated to such a point where it dictates governments, it dictates world order, it dictates national security…. It could really make or break societies,” he said. – with reports from Dylan Salcedo, Pauline Macaraeg, and Don Kevin Hapal/Rappler.com