Facebook Twitter Copy URL
Copied
Marcos defends the delay of the approval of the Bangsamoro Basic Law when he was senator, says the version then was unconstitutional 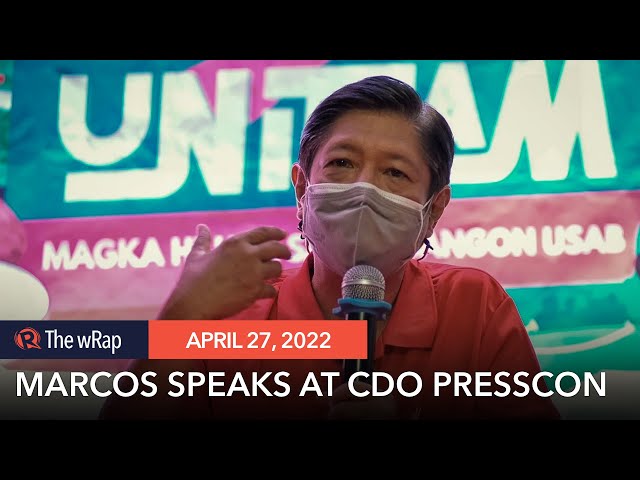 MANILA, Philippines – Presidential candidate Ferdinand “Bongbong” Marcos Jr. said on Tuesday, April 26, that the Philippine government has “done everything” to bring peace to Muslim Mindanao – an area that turned into killing fields during the dictatorship of Marcos’ father.

“I think we have made.. done everything we can do to bring peace to Muslim Mindanao, if there’s anything else that our Muslim brothers and sisters that the government needs to do, they have the mechanism under the transition committee to bring those issues to government,” said Marcos during a press conference in Cagayan de Oro on Tuesday where Uniteam held a rally.

Marcos as a senator was blamed for the delay of the Bangsamoro Basic Law (BBL) during the presidency of the late former president Benigno “Noynoy” Aquino III, and on Tuesday he insisted it was because the law back then had “unconstitutional parts.”

But what became the Bangsamoro Organic Law (BOL) was enacted only during the time of President Rodrigo Duterte. BOL created the now Bangsamoro Autonomous Region in Muslim Mindanao (BARMM), which has its own government apart from the regular provincial and city governments of the five provinces that compose the region.

(We studied it for a long time because there were so many unconstitutional provisions, but they fixed it. The BARMM is a so much better law than the proposed BBL. It is more inclusive because all stakeholders were consulted.)

The question was from a local reporter who began to premise his question by saying that there were “not so good issues” with the Moros under the dictatorship, but Marcos cut him off to say “there were not some issues, there was a war.”

Referring to former rebel groups like the Moro National Liberation Front that was established to fight the late Marcos’ military attacks against Moros, the presidential bet said, “they went to war with the State…..ang Pilipino laban sa Pilipino rin at nagpapatayan (Filipinos went against Filipinos and killed each other), that is why the government had to defend itself.” During the dictatorship, several massacres were committed in the Western and Central Mindanao, but it was the Jabidah massacre that sparked the Moro revolution. Moro soldiers were trained for a special operation, but when they complained of not being paid and even demanded better living conditions, at least 23 were shot to death. To this day, the BARMM government cites the Jabidah massacre as what prompted Moro leaders to call for the independence of Mindanao.

Some also consider the poverty of the Moro-dominated provinces in Mindanao as a Marcos legacy.

But for Marcos’ supporters, these are just “paninira (detractions).” Some bloggers and columnists identified with the Marcos camp even deny that the Jabidah massacre occurred.

In March, during the commemoration of the 54th year since the Jabidah massacre, the BARMM Ministry of Public Order and Safety said they wanted to “thwart revision attempts on the true accounts of such tragedy [and] to pursue lasting peace in the Bangsamoro.”

The commemoration activities, the ministry said, is part of transitional justice.

But simply for Marcos, “siguro lahat na ay pwedeng pag-usapan, huwag lang mapunta sa putukan.” (Maybe we can talk about everything, just put down the guns.)

Four out of the five provincial governors in BARMM, however, endorse Marcos.