NEW AFP CHIEF. Forty senior officers of the Armed Forces of the Philippines led by Southern Luzon Command (Solcom) chief Maj. Gen. Bartolome Bacarro face the members of the Committee on National Defense of the Commission on Appointments deliberating on their nominations and ad interim appointments Wednesday, September 8, 2021. 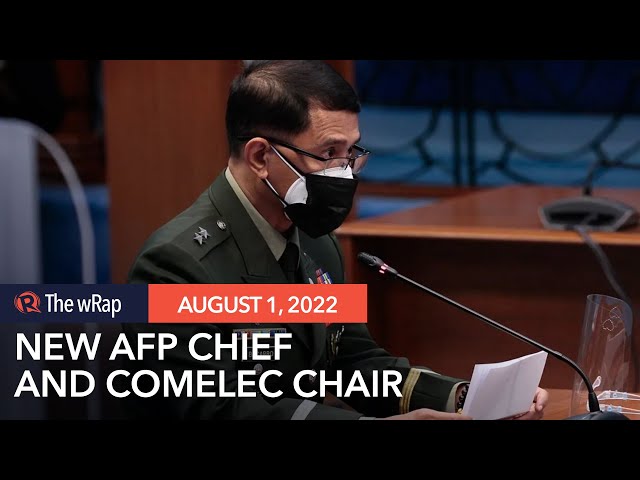 MANILA, Philippines – More than a month into his presidency, President Ferdinand “Bongbong” Marcos Jr. named Medal of Valor awardee Lieutenant General Bartolome Vicente Bacarro as the 58th chief of staff of the Armed Forces of the Philippines (AFP) on Monday, August 1.

The new military chief is the first AFP chief of staff who will serve under a fixed term of three years. Republic Act No. 11709, or the law that intends to further professionalize the military, seeks to impose a three-year fixed term on AFP chiefs and other military officers. This means Bacarro will serve until 2025, even if he reaches the mandatory retirement age of 56 this year.

Because of the law, Marcos Jr. will get to appoint only two military chiefs during his term: one in 2022 and another in 2025. This number of appointments is way lower compared to Duterte and Gloria Macapagal-Arroyo’s 11 AFP chiefs. A native of San Fernando, La Union, the Ilocano general was born on September 18, 1966. He belongs to the Philippine Military Academy (PMA) Maringal Class of 1988. His predecessor Centino is his classmate.

After graduating from the country’s premier military school, Bacarro was assigned to the 5th Infantry Division in Isabela at the height of the military’s counterinsurgency efforts in the region from June 1988 to 1995.

In 1991, he received the Medal of Valor for his “conspicuous acts of courage, gallantry and intrepidity at the risk of his life above and beyond the call of duty” against communist rebels in a 10-hour encounter in Isabela. The coveted Medal of Valor is the highest award given to a soldier who has performed a heroic act.

In 2014, he was designated the chief of the Army’s 4th Infantry (Diamond) Division. Bacarro also served as the chief of staff for operations, commander of the 502nd Brigade, commandant of the PMA, and AFP internal auditor.

His sterling military career was also once mired in controversy when Cadet 4th Class Darwin Dormitorio died inside the PMA due to alleged hazing under his watch. Then-commandant Bacarro resigned, citing “command responsibility.”

In 2021, the Commission on Appointments deferred his appointment as Solcom commander due to the PMA hazing issue. He was later confirmed by the commission.

The new PNP chief also served as the commander of the PNP southern Luzon Police command, covering Calabarzon, Mimaropa, and Bicol. He also held key positions in Camp Crame such as director of the Directorate for Comptrollership and head of the Directorate for Information and Communication Technology Management.

Azurin also served as the director of the PNP Maritime Group, and later as the regional director of the Ilocos Region police. Just like Bacarro, the new PNP chief has Ilocos ties. He was born in Paniqui, Tarlac on April 24, 1967, but was raised in La Trinidad, Benguet.

The new national police chief will serve until his retirement on April 24, 2023, when he reaches the mandatory retirement age of 56.

Marcos Jr. also named Medardo de Lemos, long-time assistant director of the National Bureau of Investigation (NBI), as the bureau’s new director. Prior to his official appointment, De Lemos, a lawyer who has been with the NBI for over 30 years, was designated by Justice Secretary Jesus Crispin Remulla as the officer-in-charge (OIC) of the NBI.

In 2013, De Lemos was also tapped as the OIC of the NBI under then-justice secretary Leila de Lima. Angeles said De Lemos has been with the bureau “for 37 years and is the bureau’s most senior officer.”

The new NBI director obtained his law degree from the University of the Philippines College of Law in 1983. He later graduated from the NBI Academy in 1985.

De Lemos is also a holder of a Career Executive Service Officer Rank, which he obtained in 2003. He is also a regular lecturer at the Philippine Judicial Academy. – Rappler.com