On Monday, April 25, Mamao issued Department Order No. 4 under the Department of Migrant Workers (DMW) supposedly lifting the ban, even if his agency is not yet fully constituted.

In the order, Mamao said that he made the assessment to lift the ban after “written consultations with the advisory board on migration and development and the Secretary of the DFA (Department of Foreign Affairs).”

Labor Secretary Silvestre Bello III said on Wednesday that the DOLE had not issued any order lifting the deployment suspension.

“As such, the verification of employment documents for new hires bound for the Kingdom of Saudi Arabia shall remain suspended,” Bello said.

Mamao said in his order that Bello was not inclined to lift the ban while other involved officials did not give their opinion. Mamao said that OFWs’ dreams were “dashed” upon coming to the capital region only to have their applications blocked.

Mamao said the ban has also caused recruitment agencies to “give up and discontinue their businesses” and the “entire labor market” the Philippines has in Saudi Arabia, Kuwait, Bahrain, Qatar, the United Arab Emirates, and Oman may be in jeopardy.

Mamao claimed the lifting of the ban would be in line with the interests of OFWs, the recruitment industry, and the nation.

But on Tuesday, April 26, Bello notified the country’s labor attachés in Saudi Arabia that the deployment ban would remain in place, asserting the non-constitution of the DMW.

The Philippines halted the processing of new applications for deployment to Saudi Arabia in November 2021 in the wake of allegations of a retired general abusing several Filipino workers.

Republic Act No. 11641, the law creating the DMW, turns the Philippine Overseas Employment Administration into the DMW and merges offices related to migrant workers in the labor, foreign affairs, and social welfare departments. The law spells out three prerequisites before the DMW is constituted:

Without these, the relevant offices to be merged and consolidated under the DMW are to remain at status quo, Bello said.

In a statement on Thursday, April 28, Senate Minority Leader Franklin Drilon sided with Bello on the DOLE’s authority over the deployment ban.

“The President is bound by the Constitution to ensure that all laws are faithfully executed. Mamao’s actions are illegal since he cannot perform the function of a full-fledged secretary until the Department of Migrant Workers is fully constituted. That is clear under the law,” said Drilon.

Drilon said the jurisdiction of the deployment ban remains with Bello, as the DMW “does not exist yet.” He said it was the “height of absurdity and clearly against legislative intent” to let the new appointee determine policies without an actual department.

“To allow this situation to continue is detrimental to the interest of the labor sector and the OFWs,” he said.

Executive Secretary Salvador Medialdea had also earlier told Mamao that the DMW has yet to be fully constituted. 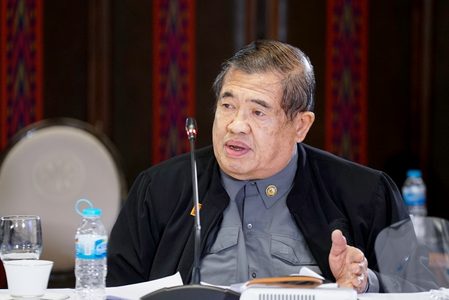 President Rodrigo Duterte also recognized the authority of the DMW’s transition committee composed of representatives from the to-be-merged agencies when he approved the committee’s IRR, instead of the version Mamao issued on his own.