'NEVER AGAIN.' Members of BAYAN Central Visayas, along with different sectoral groups, stage a protest to commemorate the 50th year since the declaration of Marcos' Martial Law, in Colon, Cebu City on September 21, 2022.

Facebook Twitter Copy URL
Copied
'Be it resolved that the House of Representatives condemn the historical distortion and whitewashing of Martial Law era via the DepEd and its school modules,' reads the House resolution filed by the Makabayan bloc

MANILA, Philippines – The House of Representatives’ progressive Makabayan bloc filed a resolution seeking an investigation into the Department of Education’s (DepEd) alleged whitewashing of the Martial Law era in the Philippines.

House Resolution No. 496, which was filed by the left-leaning bloc on Wednesday, October 26, cited reports of school modules that referred to the regime of the late dictator Ferdinand E. Marcos as “Bagong Lipunan (period of New Society).”

Makabayan also expressed alarm over circulating claims – which were already denied by DepEd – that the agency is supposedly conducting consultations on how it would change references to the Martial Law era in the basic education curriculum.

“Be it resolved that the House of Representatives condemn the historical distortion and whitewashing of Martial Law era via the DepEd and its school modules,” the resolution read, signed by ACT Teachers Representative France Castro, Gabriela Representative Arlene Brosas, and Kabataan Representative Raoul Manuel.

“Be it further resolved that the House committee on human rights and committee on education conduct an investigation in aid of legislation into the same,” it added.

Vice President Sara Duterte, who is also the education secretary, has denied allegations of “rebranding” Martial Law in favor of the father of incumbent President Ferdinand Marcos Jr.

“The DepEd – which is currently busy with its programs on improving the quality of education in the Philippines – doesn’t have time for historical revisionism that’s being alleged by some anti-Marcos groups,” she said on Tuesday, October 25. 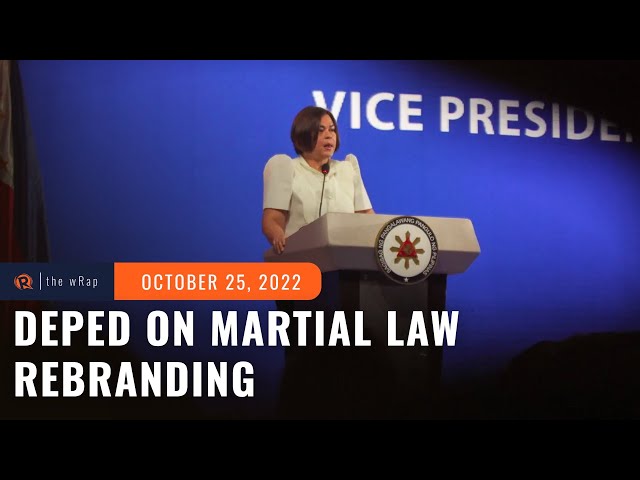 Duterte also asserted that the term “Bagong Lipunan” has been used by DepEd textbooks since 2000 “within their proper context.”

The Vice President was reacting to a viral module from Marinduque, which described the earlier Marcos years as a time when economic progress dominated the news, even though media was heavily suppressed during the Martial Law era. (READ: Marcos years marked ‘golden age’ of PH economy? Look at the data)

The controversial education module was crafted during the previous administration, when Duterte’s father Rodrigo was president, and when Leonor Briones was DepEd secretary.

The Marcos-Sara Duterte tandem won by a landslide in the 2022 polls, garnering majority of the votes. Critics believe that Marcos benefited from a well-oiled disinformation machinery that successfully rehabilitated the Marcos family’s image. – Rappler.com