Facebook Twitter Copy URL
Copied
The total cost of each of the four candidates' mainstream ads over the 90-day campaign period is over P1 billion, says PCIJ

MANILA, Philippines – Defeated presidential aspirant and former vice president Leni Robredo appeared in campaign ads worth P1.15 billion during the 90-day campaign period, the highest among candidates for national elective posts for the 2022 elections, according to a research conducted by the Philippine Center for Investigative Journalism (PCIJ).

The table on top campaign ad spenders can be accessed below:

The PCIJ, however, clarified that the numbers presented may not be the exact ad expenditures of the candidates.

“When we talk about Nielsen ad spending or ad value, this is based on the rate cards, so it is very likely that the actual amount is lower especially if there were discount for candidates during the official campaign period,” PCIJ editorial content head Karol Ilagan said.

On the average, PCIJ said the indicative campaign ad value of the candidates during the campaign season was nearly P211 million every day.

The PCIJ’s findings differ from what candidates declared as their campaign expenditures in documents they filed with the Commission on Elections after the polls. 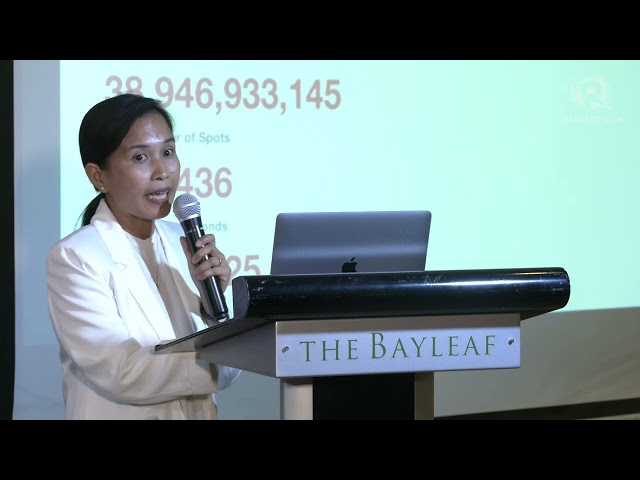 None of the national candidates exceeded P1 billion in spending based on their Statements of Contribution and Expenditures (SOCE), with Marcos already the top spender with P623 million in declared expenditures. Robredo was only second with P388 million.

The spending cap for presidential and vice presidential aspirants for the 2022 polls was P674 million, which is total number of registered voters (67.4 million) multiplied by the the aggregate amount that they may spend for every voter (P10).

TRACKER: Candidates who spent the most in 2022, based on their SOCEs Rappler reached out to the politicians mentioned above as to why their their SOCEs showed much lower amounts than the data from Nielsen. This article will be updated once we have received their replies.

Villanueva said, “Our SOCE bears the complete and faithful reflection of our ad spending, substantiated with duly issued receipts. Nothing more, nothing less.” – Rappler.com