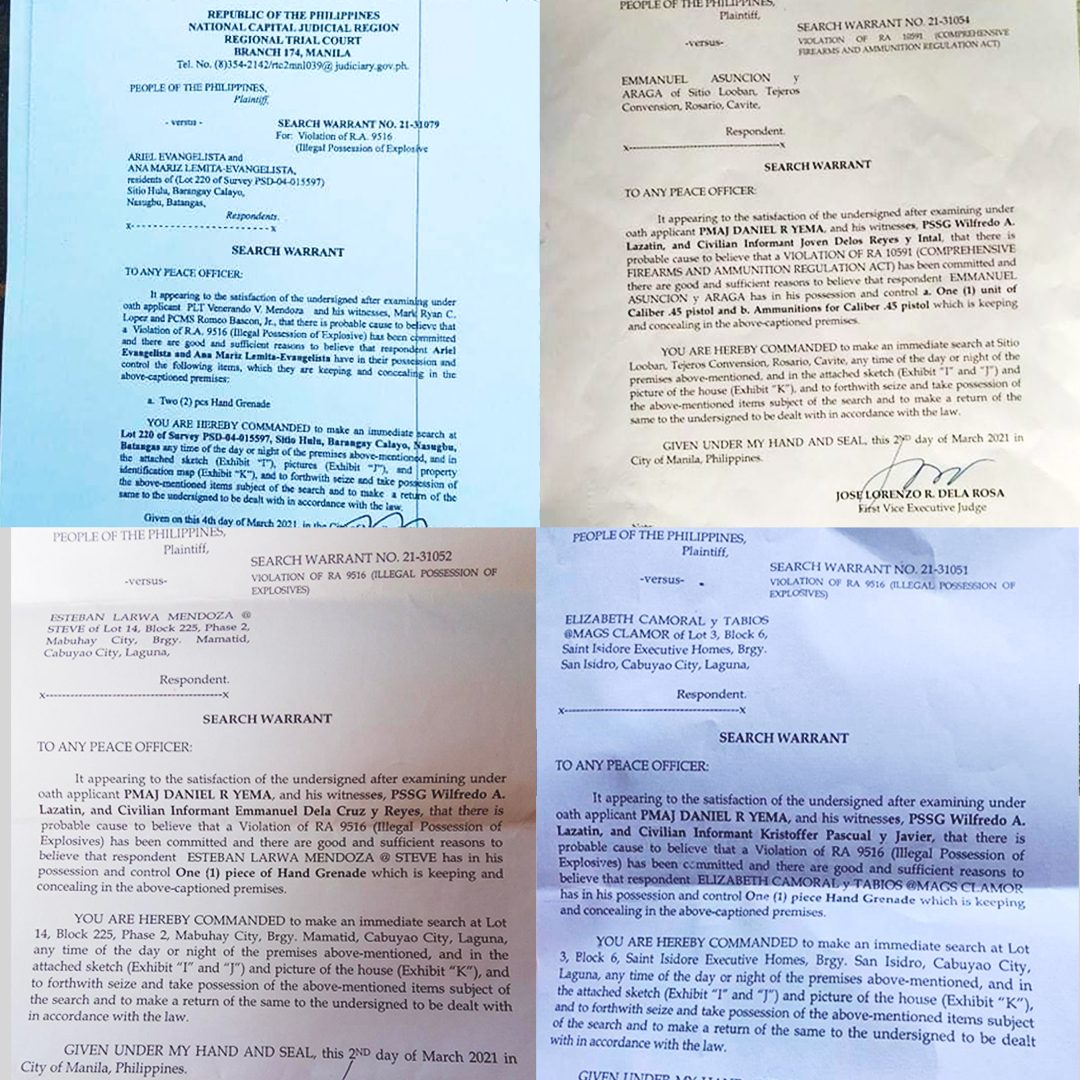 SEARCH WARRANTS. Photos of the search warrants issued by Manila Judges for activists in Calabarzon, three subjects of which died during the implementation of warrants.

Facebook Twitter Copy URL
Copied
'We are grateful and appreciative of the responsive action of the Supreme Court on the matter,' says Edre Olalia, president of the National Union of Peoples' Lawyers

The Supreme Court has scrapped the contentious power of executive judges of Manila and Quezon City courts to issue search warrants outside their judicial regions.

This is contained in the freshly promulgated rules of the Supreme Court requiring the use of body cameras in the implementation of arrest and search warrants released on Friday night, July 9.

Manila judges were also able to issue search warrants for activists in Calabarzon, that led to the Bloody Sunday raids on March 7, where nine activists were killed. (READ: Bloody Sunday activists ‘shot to be killed,’ deserve probe – forensic pathologist)

Activists complained that the 2004 rule allowed cops to just go to Manila and Quezon City, instead of a judge within their area who would be able to examine applications better.

In the new rule, the Supreme Court explicitly limited the power to issue search warrants as being within the bounds of one’s judicial region.

“The executive judges and vice executive judges concerned shall issue the [search] warrants, if justified, which may be served in places outside the territorial jurisdiction but within the judicial regions of these courts,” said Section 2, Rule 3.

Under the new rule, an executive judge of Manila, for example, can issue a search warrant outside of the city of Manila, but only within the National Capital Region (NCR).

So any application for a search warrant in Calabarzon, for example, has to be made filed before executive judges of courts within Calabarzon only.

“We are grateful and appreciative of the responsive action of the SC on the matter,” said Edre Olalia, president of the National Union of Peoples’ Lawyers (NUPL).

Human rights groups had been appealing to the Supreme Court to review rules on search warrants, after incidents of deaths during searches.

Under Section 1, Rule 3 of the SC’s body cameras resolution, when applying for search warrants, the application shall immediately state the availability of body-worn cameras.

“In case of their unavailability, the applicant may request for authority to use alternative recording device,” said the resolution.

That same provision says that “multiple search warrant applications based on the same evidence filed in the same court shall be a ground for denial.”

“If already issued, this shall be a ground for the quashal of these warrants,” said the SC resolution. In the Calabarzon raids, cops filed 63 search warrants before the Manila Regional Trial Court. The executive judge delegated the task, and they issued 42 in one go.

Activists called this a “wholesale” application, and said this went against the rule that judges must thoroughly examine each application. They said a thorough examination was not possible for dozens of applications submitted and granted in one go.

“[The resolution] is grounded on abundant experience and appears to have taken into good account the clamor to address the situations that arise in rights violations,” said Olalia.

The rules on revised criminal procedure already allowed courts to issue search warrants within judicial regions, but the 2004 rule expanded the power of the executive judges in Manila and Quezon City.

The SC’s body camera rule reiterated that if applying for a warrant before a court that’s outside the territory but within the judicial region, the applicant must “state compelling reasons.”

It was also reiterated that the “applications shall be personally endorsed by the heads of such agencies,” or the National Bureau of Investigation (NBI), Philippine National Police (PNP), Anti-Crime Task Force, the Philippine Drug Enforcement Agency, and the Bureau of Customs.