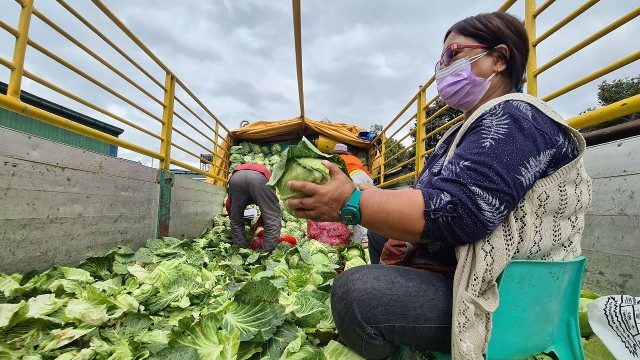 VEGETABLES. Manang Cristy cleans a cabbage while explaining why she has to increase the prices of her stock.

Facebook Twitter Copy URL
Copied
While farmgate prices are not affected, the increase of the price of vegetables is added at the market and shouldered by the consumer

BAGUIO CITY, Philippines – A day before the scheduled double digit increase in fuel prices, Manong Rommel, a vegetable trucker, already increased his transport fee from P3 to P4 per kilo.

He delivers an average seven tons of assorted vegetables from the La Trinidad Trading Post in Benguet to Sariaya Market in Quezon province.

According to him, the increase will cushion his expenses once the fuel hike kicks in on his way back to Benguet.

“We have no choice,” he said in Filipino, explaining that their fuel budget back in January was only P12,000 compared to the P19,000 they now spend for diesel. “The increase in fuel prices is really hurting us, old freight charges have become untenable. The sellers will just have to pass the additional transportation expenses to the consumers,” he added.

“We are finding it hard to recover our production expenses,” she said, adding that aside from the additional transport cost, prices of farm inputs are also on steady rise.

She cited that last cropping season, a sack of chicken dung cost P105, but they are now buying their supply for the next planting period at P150 per sack.

League of Associations at the La Trinidad Vegetable Trading Post spokesperson Agot Balanoy said “it is the farmer and the consumers that bear the brunt of the fuel increase.”

She explained that farmers immediately feel the impact on their increasing transportation expenses. However, the farmgate price “are not affected,” dictated mainly by supply and demand.

A farmgate price is the amount received by farmers for their sales at the location of the farm.

“On the part of the buyers, the increase on fuel is added on their transportation cost which is respectively added on the selling price of veggies when sold at the end market, which in turn is shouldered by the consumer,” she said.

Balanoy said unrestrained fuel price increase is among their primary problems in the sector.

She said these compounding issues have left many farmers without capital, reliant on loans to continue cropping. “Many are acquiring loans from cooperatives, private lending institutions, and even loan sharks,” Balanoy added.

In a bid to cushion the impact of the fuel hike, the government allotted a P500 million subsidy for the agriculture sector.

Of this amount, P492.5 million will go for the actual subsidy and the remaining P7 million is for administrative and operational expenses.

However, vegetable farmers like Manang Cristy are not included.

Under Memorandum Circular 7-2022, issued by the Department of Agriculture on March 7, the subsidy only covers corn farmers using machinery in their cultivation and fisherfolk utilizing motorized boats.

Net increase in local oil prices in 2021 compared from the previous year was P17.10/liter for gasoline, P13.75/liter for diesel, and P10.84 for kerosene. On March 15, the country experienced a double-digit increase, with oil companies raising diesel and kerosene prices by P13.15/liter and P10.50/liter, respectively. – Rappler.com